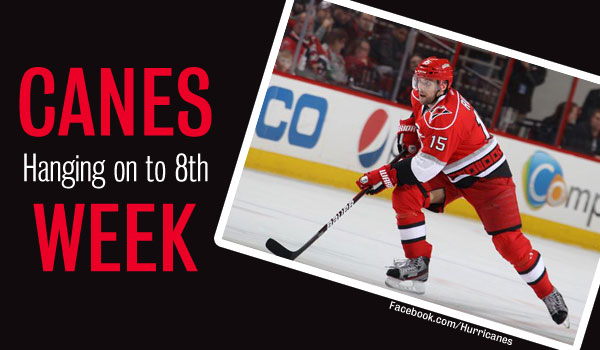 Players lost due to injuries are Bobby Sanguinetti, Dan Ellis, Joe Corvo, Justin Faulk and Chad LaRose.  Tim Gleason and Bobby Sanguinetti both required several stitches during the Florida game but both returned to the ice.  Near the end of the game, Gleason was ready to go a round with a Florida player but the linesmen stepped in to stop any roughness.

Florida Breaks out in the Third

For the Florida game, the Canes play  was reminiscent of the teams of the past few years: had the puck a majority of the time but didn’t create much offense.

Early in the game, Cane keeper, Dan Ellis made a save off Tyson Stracahan but it was the save off Tomas Fleishmann that was very impressive and set the tone for a tight game.

At the other end of the ice, after excellent forechecking by the front line, Jordan Staal made a centering pass to Kevin Westgarth who almost had his first goal as a Cane as Jacob Markstrom made a blocker save.

The sparring continued in the first half of the second period with each team taking just 3 shots. The Canes had their first powerplay when Tim Gleason saw Scotty Upshall’s stick up close and personal above his eye for 14 stitches.

The Canes powerplay continues to be a major disappointment and one of the big mysteries of this shortened season with all the firepower they have.

I’ll try to be as fair as possible but the refs had to be watching another game.  There was at least 3 clear penalties, 2 against the Panthers and 1 against the Canes that were blatantly missed and the fans let them know it.

All of the scoring happened in the third period all in the last 12 minutes of the game.  The Cats put it away when they tallied 3 goals in a 10 minute span.  The only saving grace was a Jordan Staal powerplay with a couple of minutes left. The Panthers put in an empty netter to seal the game.

The Devils game was somewhat similar but had a very unusual start. Alex Semin was in the box for a weak, but legitimate, high sticking penalty.

As the Canes man down unit was going up ice on a rush, the fastest Cane skater, Pat Dwyer was hooked from behind.  He got the shot off and future Hall Of Famer, Martin Brodeur, cleared the puck to the corner with the refs not calling ‘possession’.

Jordan Staal retrieved the puck then made a hard cross ice pass to the left point.  The pass was about 5’ wide of the defenseman with the puck bouncing off the boards near the penalty box, angling into the empty Cane net as Ellis went off for the extra skater.  Because Brodeur touched it last, he got credit for his first powerplay goal.

The Devils got 2 more goals in the second from Adam Henrique and Peter Harrold in 45 seconds, taking the wind out of the Caniacs’ sail.

Tuomo Ruutu made his season debut, coming off hip surgery, and played extremely well.  He was banging bodies and skating strong which could only mean good things are yet to come after his adjustment to game situations.

Jeff Skinner scored the Canes lone goal on a powerplay.   JStaal passed over to EStaal in the neutral zone.  EStaal saw Skinner on the right wing and sent him in with a lead pass.  Maybe out of frustration or extreme confidence, Skinner was along the boards 75′ out and let’er rip for a bullet over Brodeur’s right shoulder to foil his 121st shutout.

Shortly after the goal, Sanguietti got tripped in front of the near boards and came down on his left arm then immediately went to the locker room and didn’t return.  With a minute to go, Ellis made a save with his right leg but in the process, his skate sliced through his pads above his left knee forcing him to leave for stitches.

Now the #1 and #2 goalies are out.  Faulk was hurt, right knee, in the Panthers game and is out for 4 weeks meaning the season.  If this team has any hopes of making the playoffs, the young players are going to have to step up.  The veterans are going to have to lead by example and everyone has got to do whatever it takes to stay out of the penalty box.

One glimmer of hope is the powerplay had a goal in each of the last 2 games and maybe that’s the spark they need to get their engines cranked.  The last 2 game also had the Canes taking far fewer shifts than they normally take.  For a good part of the season, the Canes led the league in shots per game.

They’re in the 8th playoff spot by the skin of their teeth. The Southeast is so weak, if they beat Winnipeg on Tuesday, they’ll be back in the third playoff position. They must play better against the Southeast teams and gain those valuable points.