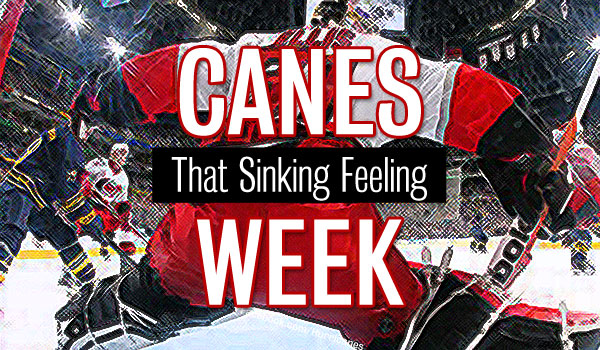 Raleigh, NC – The Carolina Hurricanes had another horrible week, losing all 3 games.

The Canes lost to Montreal 4-1 on Monday, to the Washington Capitals 5-3 on Tuesday and lowly Tampa Bay 5-0 on Thursday.  While all losses hurt, losing to Tampa Bay was particularly bad as the Bolts were one of the few teams below the Canes in the standings and they flat out need points.

The Bolts had only two road wins all season. Two were against the Canes.

Montreal is probably one of the best turnaround teams in the east this season and while the Canes usually do well at the Bell Centre, Monday’s game fell into par with the Canes’ play of late.

One area Montreal has been weak on all year is the penalty kill.  They’ve addressed that as a team and picked up some waiver talent to help.  All they needed was 5 doses of the Canes powerless play to fix that ailment as they shut down the Canes in all 5 man advantages that netted only 7 shots.

At this point in the season and with all the deficiencies to choose, the Canes powerplay has been the most disappointing.  They have the firepower to be one of the top 3 in the NHL but they rank 29th.  If they were in only the top 10, they would be atop the Southeast division and be in talks about being a Cup contender.

Jordan Staal opened the scoring and gave the Canes fans some hope.  Pat Dwyer’s speed led to the goal as he carried the puck across the Habs’ blue line, splitting the defense.  Dwyer was hooked as he was going in on Carey Price but managed to drop a pass to the high crease.  JStaal picked up the pass and put one the far high stick side to beat Price for the early, and only, Cane lead.

Andrei Markov scored a powerplay goal for the Canadiens near the end of the first. Jeff Halpern, picked up off waivers from the NY Rangers, scored early in the second and after that it was all Montreal.

The Canes are second in the NHL with shots per game but had just 19 for the game.

The Canes played at home Tuesday and things were looking better.

Juri Tlusti scored his first of 3 midway in the first period.  Bobby Sanguinetti passed up to Alex Semin who  stick handled his way into the Washington Capitals’ end.  Semin went along the boards drawing in 2 defensemen. Semin saw Tlusti was in the dirty area of the crease with 3 Caps around him. Semin centered the puck to Tlusti who was strong and fast on the puck getting it in the goal for an early Cane Lead.

Tlusti’s second goal was a rare powerplay goal.  Eric Staal passed over to newly acquired Marc-Andre Bergeron at the top of the blue line.  Bergeron passed over to Tlusti in the left faceoff circle who settled the puck then sent a wrist shot into the upper corner that surprised everyone but Tlusti.

Alex Ovechkin scored an unbelievable shot very late in the period that may have been the game breaker.  The shot was from about 75’ out and no disrespect to Dan Ellis, but it’s doubtful any goalie in the NHL would have stopped that shot.

Washington scored early in the second on a Mike Green powerplay goal, carrying over the Caps momentum from the first.

Tlusti netted his third goal for his first NHL hat trick a minute later on a Canes powerplay.  Staal had the puck down low above the goal line and made a hard, crisp pass to Tlusti’s tape for a beautiful tip-in, putting the Canes up 3-2.

Washington answered with 3 more second period goals, taking the wind out of the Hurricanes making them look as if they should be called the Drizzles.  In all fairness, their defense took another hit as Joni Pitkanen went down after crashing into the boards on an icing play, breaking his heel bone and is out for the season.

Their young #1 defenseman, Justin Faulk has missed several games with a knee injury and Cam Ward is also out with a knee injury.  Ellis is just back from a severe laceration and was replaced by Justin Peters.  Peters has played well against the Capitals in the past but Tuesday was a different story.

The Canes rebounded getting 34 shots on net but giving up 5 goals on only 19 shots is unacceptable.

Canes lose 6th in a row at home

Fans were hoping playing Tampa Bay who was below the Canes in the standings would be just what the hockey gods ordered.  It would give the Canes an opportunity to put some distance between them and the Bolts as it was only 2 points separating them. Division leading Winnipeg Jets, just 4 points above the Canes were playing Montreal and a win by the Canes along with a loss by the Jets would have put the Canes back in the playoff race.

The Jets did their part by losing but the Canes got blown away, 5-0, by the Bolts.

It was one of the saddest performances of the season that has had many to choose from lately.  The Canes went 0-for-3 on the powerplay with 37 seconds of a 5-on-3.  One of the few hockey unwritten folklore signs is if you score on a 5-on-3, you’ll win; don’t score you’ll lose.  Canes didn’t score and lost big time.

The Bolts picked up Ben Bishop at the trade deadline and the 6’7” goalie filled the net as he turned away all 45 Cane shots for an impressive first game with his new team.

The Canes actually put the puck in the net first but the goal was ruled a no-goal.   EStaal had a nice pass to Semin to the right side of the net.  Staal may have waited a fraction of a second too long as he passed to Semin while both were in full stride.  Semin couldn’t get his stick down fast enough but was able to angle his skate just right hoping the refs, linemen, 17600 fans and the goal review crew in Toronto wouldn’t notice. Problem is everyone did and the stage was set for a disappointing night.

Only bright spot was Tuomo Ruutu returned to the lineup and along with Semin, led the Canes with 4 shots on goal.

Despite the loss, the Canes are still only 4 points out of a playoff spot.  The Jets matched the Canes with 3 losses this week.  With Washington surging, expect the top spot in the east to be a fight.  The Canes did trade Jussi Jokinen to Pittsburg on Wednesday for a conditional 6th or 7th round draft pick.  In Jussi’s first game with the Penguins, he scored a goal in regulation and the winning goal in a 2-1 shootout victory over the Rangers.

Clean Water: From the Triangle to the Dominican Republic
Scroll to top