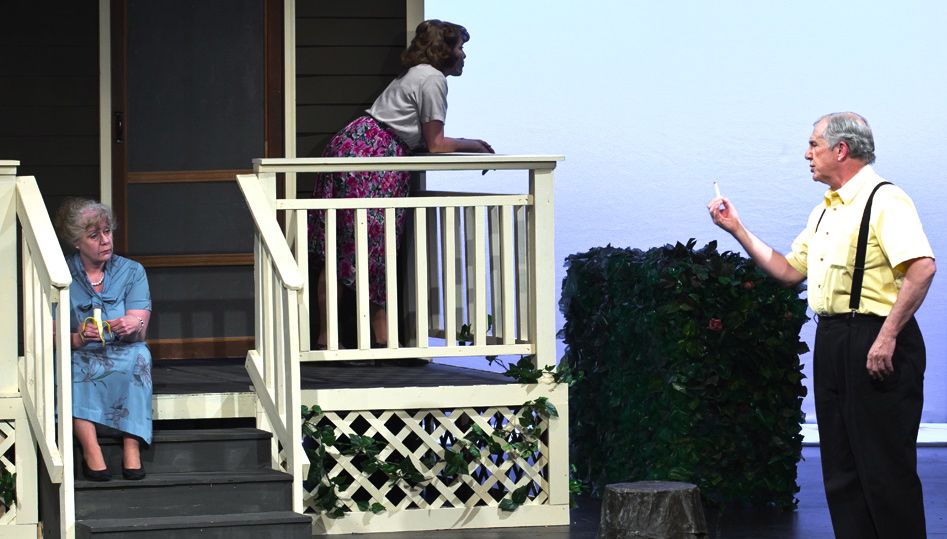 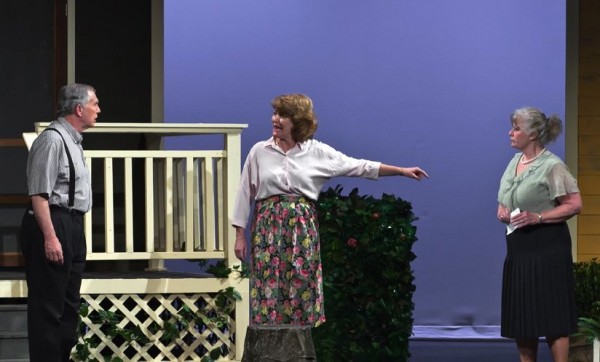 Cary, NC – The Cary Players opened “Mornings at Seven” this past Friday at the Cary Arts Center with a last minute switch in the cast. Debra Grannon, a long-time board member for the group who has produced and appeared in numerous productions, took over the role of Arry, a week and a half before the play was to open. She literally steals the show.

Before watching the production, I had heard there were some last minute changes, but the part that Debra was recast for, is a character that is on stage for almost the entire evening, She does an amazing job playing the role of Arry, the spinster sister. 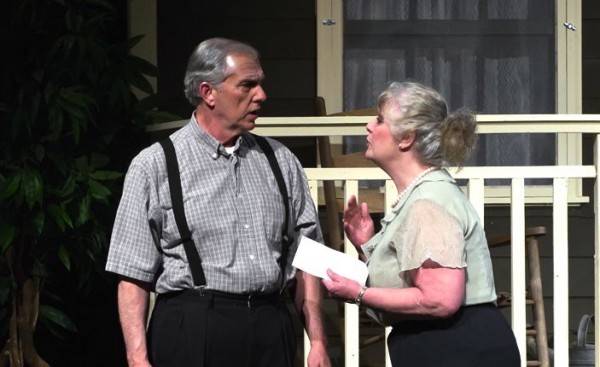 A Tale of Family Drama

The story of Mornings At Seven is part bedroom farce part family drama. The scene is set on stage with two houses where all the action takes place in the yards between them. A set of four sisters live in a small town with their families. Two sisters (Cora and Ida) and their husbands (Thor and Carl) live next door to each other in the two homes, with a maiden sister, Arry, played by Grannon living with Cora and Thor. Their oldest sister (Ester) lives “up the road” with her husband (David).

At the opening everyone is waiting for Ida’s bachelor son, Homer,  to arrive with his long engaged girlfriend, Myrtle. He looks to be a mama’s boy and may never get married as the engagement has already gone on for 7 years.

The first conflict is that Homer doesn’t really want to leave home, but everyone wants him to get married and grow up. There’s an empty house owned by his father, Carl in the balance.

The second conflict involves Cora and her unhappiness at never having a “home of her own” with her husband because Arry has always lived with them. Cora has her eyes on that empty house of Carl’s.

The third conflict is that David doesn’t care for any of Ester’s family and has forbid her to visit them, giving her an ultimatum in the bargain.

A fourth conflict is Carl’s need to “Know where he is”. The characters are all in their 60’s and 70’s, and he now questions the road not taken in his life. This doubt causes him to have what the other characters call “spells”

A few well-kept and hinted at secrets keep the characters and the audience guessing. Why does  Arry continue to live with her sister and brother-in-law? What secret holds them together? Why won’t Homer (who’s 40) move out and get married? What keeps David from allowing his wife to visit her sisters? 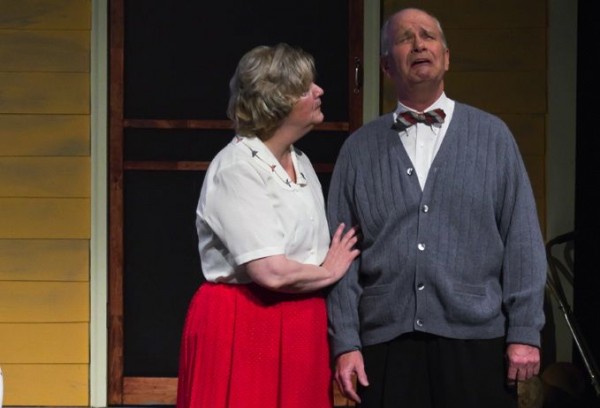 The character of Carl played by George Lynch,  reminded me of actor John Malcovich, in his existential search for meaning in his life. He’s 68 and worries that his life has been a waste. His wife Ida (Terry Townsend), just wants him to shake off these feelings and be normal. Ida is so focused on her son, that she’s blind to the fact  that she’s enabled him to remain a child forever in her grip.

The character of Ester, (played remarkably by Gilly Conklin in role so unlike anything I’ve seen her in previously) takes a while to emerge, entering the action late in the first act. She is the the eldest and “smart” sister, who has married a professor who thinks he’s so smart,  he can’t stand to be around his in-laws who he believes are all idiots. David (Bruce Ackerman) gets no sympathy from this reviewer but he plays it well as the  over-the-top “know-it all” brother-in-law. Ester is quiet and a foil for all the others’ nonsense.

But truly it is the character of Arry who lights up the stage. Grannon’s vivacious performance is truly entertaining and I hope to see more of her on stage in the future. Her roles in past Player’s performances have been smaller, and she has spent a good deal of time behind stage. In this role she shines brightly.

The story offers several surprises in the second act (and I’m not revealing what they are) but let’s just say they aren’t what you think. Cora gets a house for herself, Airy gets out from under, Carl finds purpose, and Homer and Myrtle figure things out. Just not how you would think it all works out, there’s a couple twists.

Its a story of family drama, like all our families have. So forget your own troubles and have a laugh at these four families and how they solve their issues next weekend at the Cary Arts Center stage.

Tickets can be purchased online or at the Cary Arts Center Box Office.