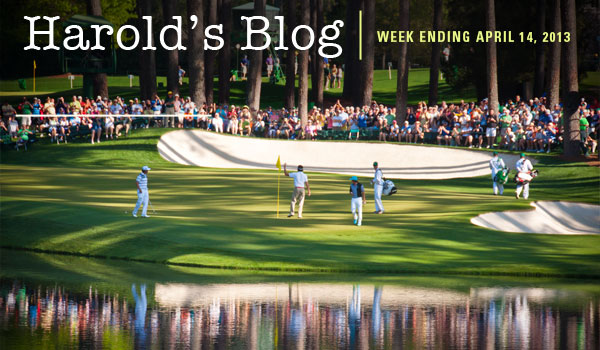 From the blog of Cary Mayor Harold Weinbrecht. Photo of 2013 Masters Tournament by Nate Weigle.

Cary, NC – Last week was a vacation week (sort of). I was working in Augusta, Georgia at the Masters Golf tournament for most of the week.

Monday before leaving town I had a budget preview meeting with staff. This is the time of year when each council member gets a high level overview of the budget. One, two, or three council members at a time meet with the budget director and town management. We provide our input to preliminary thoughts presented by staff as they shape their final budget recommendation.

In this meeting there were a couple of facts that were very interesting and will require decisions by council. First, our population has increased about 20,000 over the last few years but our staff count has remained the same (except for fire and police). Staff is stretched to the limit and in many cases is doing the work of multiple people. Our levels of service will start suffering as we move forward unless staff count is increase. This will be a decision point for council.

Second, our General Fund reserves may need to be adjusted. Cary is required to have 2 months of reserves or about $18 million. Years ago council established a policy of 4 additional months over what is required which amounts to about $43 million. Since interest rates are very low this money is not making much interest. We might want to consider changing our reserve policy and using some of that money to pay down the debt. This will be another decision point. There will be much discussion once the staff makes its recommendation to council.

Tuesday I headed to the Masters Golf tournament and the following are my observations and thoughts:

My experience was a memorable one and I had a lot of fun. But I was very tired and glad to get back to Cary.

In emails received this week it was announced that Prestonwood had two of the top 100 golf courses in the state. Very cool.

Emails received from citizens included several complaints based on misinformation about a downtown park. I have spoken about this in my previous blog. Other emails included a request about the town’s street light policy, concerns about the May 2nd Summit for the Future, a complaint about an incident at the town’s convenience center, a concern about a retention pond, a comment that Cary to give Chatham County money for development near Jordan Lake, a question about available land, a question about electronic meetings, a concern about the closing of the ESC office in Cary, and kudos for our animal control officers.

This week promises to keep me busy. It includes a Mayors Association meeting, a CAMPO (Capital Area Metropolitan Planning Organization) meeting, and a council meeting to go along with a few ceremonial events.

Well that is all for this week. My next post will be on Sunday April 21st.