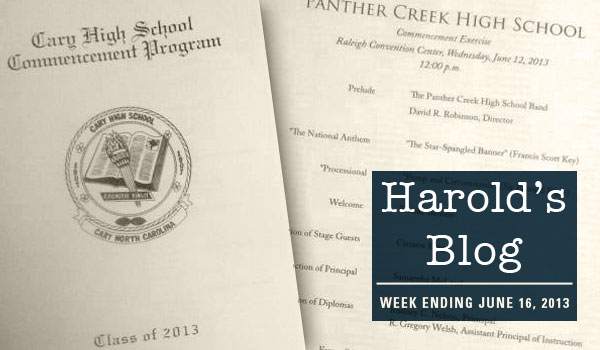 Cary, NC – This week was a typical week for me as mayor. It included a council meeting and several events.

Monday I called all council members for concerns or questions that they may want staff to be prepared for at our regularly scheduled council meeting Thursday. In my conversations with council members the only concerns centered on Land Development Ordinance amendments and the moving of the fire sculpture from the 13 acre downtown site.

Later in the day I met with staff members and we went over the items on the agenda. Most of our discussion was on the fire sculpture. Staff also notified me that we would be discussing several items in closed session. Based on that information I guessed the meeting would last until around 8:30.

Tuesday I took vacation from work so I could be a part of Cary’s oldest high school graduation, Cary High School. The ceremony was very traditional with a little chorus music and a few remarks. This was special ceremony for me since I had four seniors from my Sunday School class graduating. I was joined on stage by several dignitaries and council member Frantz from Cary. We have both attended every Cary High graduation since being in office. The entire ceremony took a little over an hour.

Later Tuesday I headed to Crosspointe Church on Carpenter Fire Station Road to kick off an Area Conversation of our Imagine Cary process.

After a few remarks the people broke into small groups of eight people. They spent a lot of time giving their thoughts about what they liked and disliked about Cary. The comments were fascinating and covered about everything you could think of. My understanding is that the comments will be collected and sorted into themes.

There were five Area Conversations planned. Four have taken place and the last remaining one will be at the Matthews House on Monday, June 24th from 7 to 9 PM.

Wednesday I had the pleasure of being on stage for the Panther Creek High School graduation. This was the largest graduating class in Wake County with over 550 walking across the stage. Interestingly, the graduating classes in the future will continue to get larger. I heard that Green Hope’s freshman class has over 700 students. The Panther Creek graduation ceremony was focused on getting the diplomas in the hands of the graduates and had little fanfare. I was joined by Cary Council member Bush and several other dignitaries including School Board Member Prickett whose son was part of the graduating class. She was able to hand her son his diploma and give him a hug which was really sweet. Again, the entire ceremony took about an hour.

Wind Down Wednesday at Waverly Place

Later Wednesday I attended Wind Down Wednesday at Waverly. There were not a lot of potential business people to talk with this week so I enjoyed the music a while before heading home.

Thursday morning I, along with the Cary Chamber and several staff members, hosted the CEO Roundtable breakfast meeting which was a part of the Imagine Cary process. Companies represented included Deutsche Bank, American Airlines, Lord Corporation, SAS, John Deere, and Wake-Med. We had a great conversation and it was very interesting hearing from business perspective.

One company representative had a great vision of the future which is similar to how I feel. I am paraphrasing but he said Cary should identify its core strengths, always keep the core strengths strong, look for new initiatives always making sure they add value and don’t harm the core strengths.

The entire group had a great understanding of where Cary is in its maturity. That is, we are about 89% built out. Most of them believed that attracting young residents is a key factor to their success. They stated that most of their younger employees do not live in Cary (coincides with information presented by the consultant at the Summit). They also believed transit and downtown redevelopment was important for the future.

The CEO Roundtable and Area Conversations are the last pieces of the first part of Imagine Cary. As has been said many times, Imagine Cary is a multi-year process. Here is how it breaks down:

Development data is also interesting and include:

To find out more about Imagine Cary go to the website at http://www.imagineCary.org.

Thursday night was the regularly scheduled council meeting. The items that generated the most public comment and council discussion were the budget public hearing, the Land Development Ordinance Amendments, and the fire sculpture.

The budget public hearing was the last of several public hearings. Our budget has to be approved by the end of June to take effect on July 1st. Council will likely approve the budget at our next council meeting on the 27th .

The Land Development Ordinance Amendments included one item for allowing strings of lights. Council decided not to allow strings of lights on buildings and keep them in the downtown district. Two amendment items on champion trees and beekeeping will come back to council at a later date since they were delayed for continued discussion by the Planning and Zoning board.

The council decided to move the sculpture to the water tower site. It was a unanimous decision and I believe the best decision.

The pocket park will be designed by staff as a gathering place and what better piece of art to have on that space than a piece called “the meeting place”. There was a lot of controversy on this piece of art. Some people believe that this piece has no value and they are appalled that we spent money on it and are spending more money to move it.

While I am not artistic at all, I do very much respect the arts. I believe one of the strengths of Cary is its diversity and that includes diversity in all artistic tastes. While many people are passionate that they don’t like this piece of art there are many that are just as passionate about having it in Cary. I believe the permanent home for this piece will serve all our citizens well.

Saturday I attended a charity walk-a-thon held by the group called Support and Serve with Helping Hearts.

Support and Serve with Helping Hearts consist of a team of elementary, middle and high school students who express their gratitude by helping sick children through organizing annual fund raisers for various children’s hospitals every year. This year they exceeded their goal and raised $8600. I find it very heartwarming that children spend their time and efforts to help other children.

This is a great cause that is not only helping those in need but is creating well rounded people that hopefully will lead our community in the future. God Bless them!

In emails this week I received a complaint about the town’s multi-year planning process stating that due to our reckless spending they will not be participating on our community outreach or any other part of the Imagine Cary planning process. That is too bad.

This week includes several meetings and events with one of the highlights being the opening of fire station #8.

Well that is all for this week. My next post will be on Sunday June 23rd. Although I have Facebook and Twitter accounts those are not the best means of communications with me. Please send all Town of Cary questions or comments to Harold.Weinbrecht@townofcary.org and email personal comments to augustanat@mindspring.com.