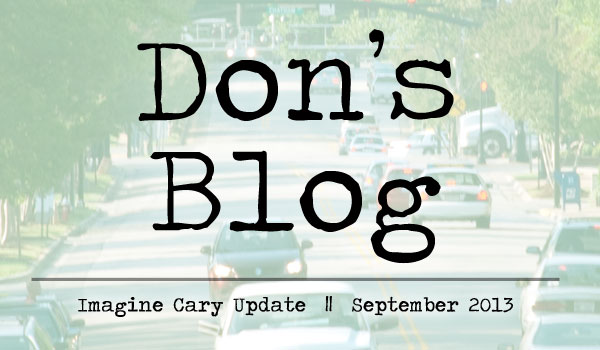 Cary, NC – At our latest Imagine Cary work session, consultants presented 12 Vision and Value Statements drafted by the Committee for the Future for council review prior to being “tested” by the community via a mind-mixer website. The 12 Vision and Values statements spoke to the following topics:

After review of the Vision and Value Statements, the question to council was, “do you have any apprehension about testing the statements in their current form?”

With some, yes – others not so much.

One of concern was the Imagine Cary Transportation Value Statement:

“We believe in providing a wide range of functional and well-designed mobility choices – driving, walking, biking and transit – that facilitate moving into, out of, and around the community with a design emphasis on people and the human experience.”

What the heck is “the human experience” anyways? And what does it have to do with Cary’s vision for transportation over the next 10-20 years?

It gets a little clearer when you look at the “themes” used to craft that statement.

The “themes” unanimously agreed upon by the committee include:

So in other words, transit, transit and more transit! The human experience must be all the new friends you meet on the bus.

“Good Road Network” did make the neutral list – that means the committee was split on whether this was important or not.

I do not believe the majority of Cary citizens would agree.

But no worries – the consultants aren’t going to test the themes with the public – only the Vision and Values Statements. My concern with this is that the themes are the meat and potatoes of the statements – so why not tell folks what we really mean? Why only “test” feel-good statements than can be interpreted a number of different ways?

The council had similar concerns with a few other categories to include why such a significant focus on the arts and downtown? Heck, I’m as big a fan of downtown as anyone and even I thought it was a bit much.

The emphasis on affordable housing was also of concern. What does “…support for additional residential choices for a variety of lifestyles, ages, cultures, aesthetics and incomes organized in a walkable pattern” really mean? Is it a fancy way of saying inclusionary zoning? Is it a statement of support for subsidized housing? Let’s be clear about what we want to communicate.

And that’s what we tried to do. The council edited some of the Vision and Value Statements that we had concerns with to better reflect our community’s values and communicate our intent. These will now be “tested” on the mind-mixer website thingy ….that most average citizens won’t participate in…

To be fair and to the committee’s credit, most of the values statements required only a few word tweeks and/or the removal of a sentence here or there. There was one or two that were not edited at all.

But in the end, and regardless of the changes we made, I find myself less confident in the process than before. I have a greater concern of who is really driving the process – our citizens or special interests. Given the push-back we received from the consultant at our meeting I can’t help but wonder… Bottom line however is that if I do not have faith in the process, I cannot trust the outcome.

I appreciate much of the committee’s work and I thank them for their service. I genuinely believe they have added value to the process and we couldn’t do this without them. I just don’t believe some of their recommendations to be representative of the majority of Cary citizens, and I’d like to better understand why that is.

From the blog of Don Frantz, Member of Cary Town Council representing District B.