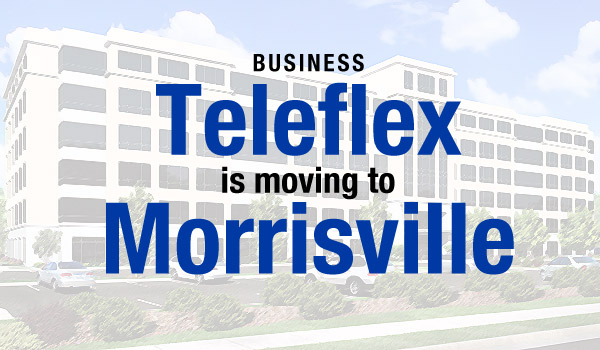 Morrisville, NC –The Morrisville Chamber announced today that Teleflex, a maker of medical devices, will relocate its RTP-area operations to Perimeter Park.

Teleflex (www.teleflex.com) is another one of those hidden giants – big companies but not exactly household names. Teleflex makes single-use medical devices used by hospitals and employs 442 people. They are planning to add 75 more jobs in the next three years.

Currently, the company has its regional base on Weck Drive in RTP (Durham). Their relocation certainly had to be a hotly contested issue for developers and municipalities across the region.

And the winner is: Morrisville.

According to the Morrisville Chamber of Commerce, “a subsidiary of Teleflex Incorporated will be relocating its existing operations in the Research Triangle Park area to a new facility to be constructed in Morrisville, N.C. Their new location will be in Perimeter Park Three, a new 245,000-square foot, six-story office building owned, leased and managed by Duke Realty, currently under construction and set to be completed by September 2014.”

“We are pleased that Teleflex has selected Perimeter Park Three, joining a long list of other quality companies who call Perimeter Park home to their business,” said Jeff Sheehan, senior vice president for Duke Realty’s Raleigh operations. “Teleflex’s decision to relocate to Perimeter Park in the fast-growing Morrisville submarket, is testament to the appeal of this well-located and easily accessible, mixed-use development for thriving businesses.”

The Power of Grants

The project was made possible in part by a performance-based grant from the Town of Morrisville of $200,000 over three years. This grant will trigger a match from the One North Carolina Fund of up to $200,000.

Companies receive no money up front and must meet job creation and investment performance standards to qualify for grant funds.