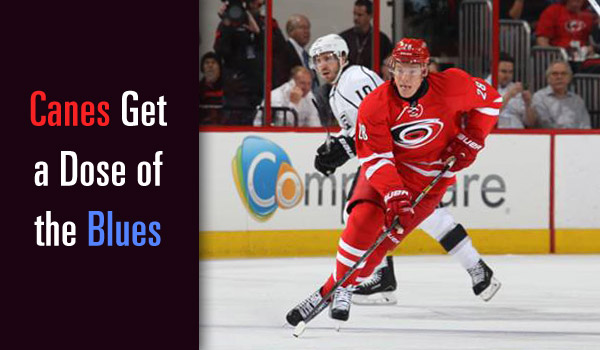 Raleigh, NC — After a great home stand, the Carolina Hurricanes drop the next two games, away in St. Louis 4-2 and home against the Boston Bruins, 4-1.  The Canes are still anemic in the scoring department and that news got worse as Alex Semin received a concussion in the Blues game.

Canes Get a Dose of the Blues

The Blues are an extremely strong and talented team and by the way they’ve been playing, should go far into the playoffs.  Alexander Steen now leads the league in scoring with a goal and an assist against the Canes.

Steen’s goal changed the game as the Canes were down 2-0, then tied a team record by scoring two shorthanded goals during the same penalty kill.

Eric Staal scored on a semi breakaway after a nice pass from Manny Malhotra just north of his own blue line.  Staal turned on his jets going straight for the goal sending one five-hole to cut the score 2-1.

Just under a minute later, Riley Nash got the puck deep in the Blues corner and saw Nathan Gerbe streaking to the net.  Gerbe had trouble corralling the puck but used his skate to get the puck on his tape.  That juggling between the stick, skate and stick again, along with Gerbe’s head fake had goalie Brian Elliott committing too far to his left leaving a Grebe most of the net to tie the game and put life into the Canes.

Steen’s goal early in the third was a back breaker for the Canes and the game was virtually over at that point.

This is Movember, which is the month for men’s health awareness and growing moustaches is the monthly theme.  Several Canes have a moustache growing contest where fans can contribute money for The Kids in the Community Foundation.

The Canes had Cam Ward back in net after being out for 3 weeks with a ‘lower body’ injury.  Ward looked very rusty early in the game, giving up 2 goals on 4 shots.  He looked better as the game went on.

It could be me, but I thought the defense relaxed a bit compared to the last 5 games, aka games when Peters was in net.  If the ‘D’ played as gritty every game, Ward wouldn’t be left out to dry so often.

The Bruins first goal was a powerplay goal however the defense wasn’t clearing the crease, allowing Riley Smith an easy tip in.  From that goal on, it looked like the Canes were chasing the Bruins.

The Canes lone goal came fro the EStaal line with all forwards involved.  Drayson Bowman banked the puck up to Staal in the Bruins zone.  Staal’s long reach allowed him to snag the puck then centered it to Tuomo Ruutu driving the net down the middle.  Ruutu had a stride on a defender and shuffled the puck into the net for his first goal of the season.

Ruutu’s smile said it all as he’s play well in the past 2 weeks but not much on the score sheet to show for it.  Let’s hope that’s the beginning of more smiles to come.