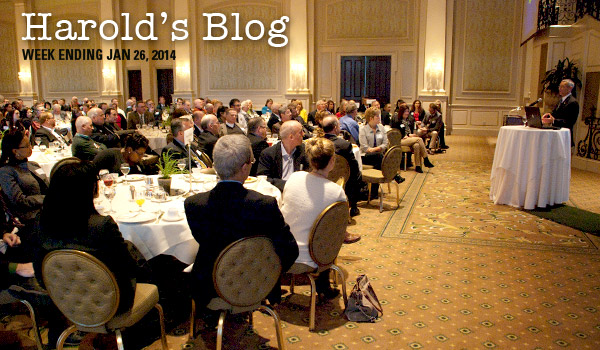 Cary, NC — This week was a slow week with the exception of a couple of significant events.

Monday I was supposed to attend the Mayors’ Association dinner but had to cancel at the last minute to nurse a sick family member. While not mentioned at the meeting it was disclosed to me later that Mayor Weatherly of Apex was resigning.

Mayor Weatherly has given many years of public service to Apex and the region and we are better for it. He was a strong partner as we worked through the issues getting the Western Wake Regional Wastewater Facilities approved and built.

I wish him much success in his new role at the state level.

Tuesday morning forecasters were predicting inclement weather for Wednesday morning when I was scheduled to give my State of the Town address at Prestonwood. After talking with the Chamber President who also talked with the venue, we decided to move it to Friday morning. While we realized the weather might not amount to much we also realized that schools would probably be delayed which would impact our audience.

Tuesday afternoon I taped the Cary TV version of the state of the town address in the council chambers. This started showing on January 24th which is the day I gave it live at the Chamber breakfast. The taped address was divided into three sections to allow for three different looks. We did two takes for each section and an extra take for the first section. With the repositioning of the camera and lights in addition to the takes it took us about one and a half hours.

Thursday I had the pleasure of attending the mid-year graduation ceremony for Athens Drive. There were 26 graduates going through the ceremony which included a friend of mine’s son. It is always priceless to see the expression on their faces as they walk across the stage. I wish them all the greatest success in their futures.

Friday – State of the Town

Friday morning I gave the annual State of the Town address at the Cary Chamber’s Eye Opener Breakfast.

After being introduced, I was stunned when the audience of about a couple of hundred gave me a standing ovation. I had to have looked like a deer in headlights.

I used PowerPoint for the first time to deliver my address and thought my presentation went well. The presentation along with questions lasted a little over 30 minutes.

The message was divided into several significant areas: the people involved in making decisions for our town and economy, our accomplishments, the state of our core services, and challenges we may face in the coming year.

I summarized the state of our town in one word, STRONG.

Comments I heard afterwards was that this was the best of my 7 addresses. To read the text of the Cary TV State of the Town Address go to http://www.townofcary.org/Town_Council/stateofthetown.htm. My address at the chamber event was slightly different and had a little more data. Please let me know what you think.

[Editor’s Note: For the benefit of CaryCitizen readers, here is the Town’s video of the Mayor’s 2014 State of the Town address. You can also see it on Youtube]:

Unfortunately, this week included another misleading article from the local newspaper/tabloid [Cary News]. The article titled “Roads vs. streets? Cary fine-tunes goals” was an attempt to summarize the council-staff retreat held last week.

This disingenuous article picked out a few facts from two sessions to give an impression that we spent $16,000 and two days just tweaking words and goal definitions. The article was not even close to being fair and balanced. Since the reporter was there the entire time I have to assume he must have dozed off since he didn’t mention the purpose of the topics we were discussing.

The communication/branding part of the retreat, mentioned in the article, was to better define what makes us great as an organization and a community so that we can message this to attract economic development. The definitions, mentioned in the article, were from another session to define what we fund in priority based budgeting. For example, if you say transit it might include rail and we are not funding rail on a local level.

To get a more accurate account of what happened at the retreat read my blog from last week and the Cary Citizen’s account at https://carycitizenarchive.com/2014/01/22/cary-staff-council-retreat-2014/.

As a side note, one discussion at the retreat was how to counteract the misinformation being spread by the local newspaper/tabloid [Cary News]. And he failed to mention that too.

In emails from staff this week the town council was notified that approximately 90 trees at the Cary Towne Center will be removed.  Many of the trees are old and are nearing the end of their life spans (whether due to original poor species selection or the fact that some of them just have not fared well in an urban parking lot setting).  All the trees that are being removed are dying, diseased, and/or in significant decline.  Staff approved the removal and replacement of these trees. The Mall has over 220 trees not counting outparcels.

Well that is all for this week. My next post will be on Sunday, February 2nd. Although I have Facebook and Twitter accounts those are not the best means of communications with me. Please send all Town of Cary questions or comments to Harold.Weinbrecht@townofcary.org and email personal comments to augustanat@mindspring.com.

More Snow This Week in Cary

Get Ready for Tax Time
Scroll to top