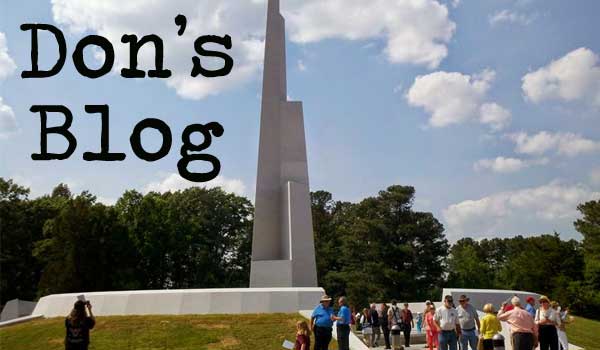 Cary, NC — Thirteen years ago, Jim and Anne Goodnight of SAS Institute and members of the National Veterans Freedom Park Foundation (NVFPF) had a vision for a memorial park in Cary to honor the service and sacrifices of our nation’s veterans both past and present and to serve as a permanent reminder of the freedoms they gave so much to protect.

On May 21, 2014, their vision finally became reality with the opening of the Veterans Freedom Park in Cary and the dedication of the 90 foot tall monument located in the center of the park. It was an incredible event and I was honored and humbled to participate.

Hundreds of veterans from wars and conflicts as far back as WWII were in attendance as were the founding members of the NVFPF, Jim and Anne Goodnight, representatives of Veterans Affairs North Carolina, The USO, VFW, American Legion, members of the community, council members Jack Smith (the council’s only veteran), Mayor Pro Tem Gale Adcock and Ed Yerha and Cary Visual Arts.

The Goodnights and SAS Institute donated the nearly 13 acre site to the NVFPF and paid for the design and construction of the park’s monument.

I am sure I speak for everyone when I say we cannot thank them enough for their generosity and support for our veterans. The park has now been gifted to the town and the town will be responsible for all maintenance and future park improvements.

There will be future improvements made I promise you.

You can see the video of the event on the Town of Cary’s youtube channel here.

Unfortunately not everyone who attended the ceremony was supportive of the park’s intent – specifically the use of the word “freedom” in the parks name or monument. A kook and his sidekick showed up who do not believe our veterans fought for freedom around the world – and take offense to the use of the word. Seriously.

I have no tolerance for those who attempt to dishonor our nation’s veterans or otherwise impugn their service. As a parent of two sons in the Army, the son of a Sailor and the grandson of a Marine, I know exactly the type of person a veteran or active duty soldier is. They are people of honor and values. Words like integrity and valor mean something to them. They believe that things like Liberty and Freedom are worth fighting for, and so many paid the ultimate sacrifice. Freedom isn’t free.

Because of our nation’s veterans, this idiot has the freedom to be a moron, and I have the freedom to let him know what I think about that, which I did. I probably said some things I shouldn’t have, but my blood was boiling.

Only a despicable individual would attempt to tarnish an event honoring our nation’s veterans. Thank goodness that he and his ilk are but a very small minority of our community.

Besides that five minutes of stupid, it was truly an amazing and emotional event. I was so proud for our veterans and our community. A special thanks to the project team and contractors for getting this ready in time for Memorial Day and to all those responsible for the day’s events.

I hope that as you all enjoy this holiday weekend that you take a minute to reflect on why we celebrate; to honor and pay tribute to the brave men and women who fought and gave their lives for a cause greater than themselves. We remain the land of the free because of the brave.

Thank you veterans. We are forever grateful.