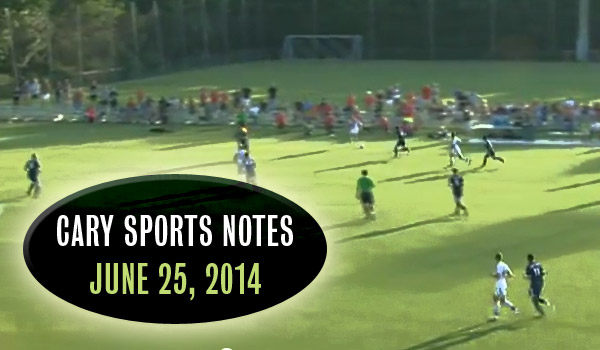 For the third consecutive time, the RailHawks have beaten L.A. Galaxy to advance in the quest for the Lamar Hunt Cup. From Yahoo Sports:

Landon Donovan’s no good World Cup period continued on Tuesday night when the LA Galaxy lost 1-0 in extra time to the second-division Carolina Railhawks in front of about 3,000 fans in Cary, North Carolina.

The Railhawks will now face another MLS side in FC Dallas in the quarterfinals, where they lost last year. In 2007, Carolina made it to the semifinals.

The Wells Fargo Cup is sponsored by Wells Fargo and the NCHSAA. The award recognizes the high schools that achieve the best overall interscholastic athletic performance within each of the state’s four competitive classifications. The Cup program is in its 35th year.

For the fifth year in a row, Green Hope High School in Cary achieved the top score in the 4A division. From NCHSAA:

In the 4-A classification, Green Hope finished first with 475 points to hold off hard charging Apex at 457.5 for the crown. Wake County schools did extremely well, as three of the top four finishers and six of the top 12 in the standings are from Wake County.

Green Hope preserved its title by finishing in the top eight in both men’s lacrosse and men’s tennis and placing sixth in men’s golf.

Recipe: Fish on the Grill