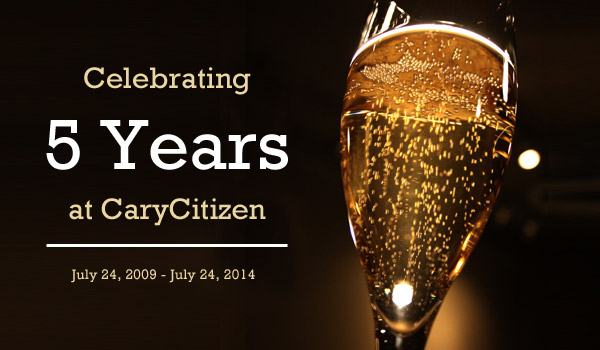 Cary, NC — Today, July 24, 2014 is the 5th anniversary of CaryCitizen. Thanks to all our readers, contributors and advertisers who have made it all possible.

We published our first story on July 24, 2009. Here’s a few cumulative stats over the first 5 years:

CaryCitizen also gets about 20,000 reads per month via email.

Since the beginning, we’ve had a strong, pro-community comments policy: Be polite, be real.

Right away, CaryCitizen readers understood that we were rebelling against the free-for-all comments policy on newspaper websites at the time. Now, most newspapers have adopted our policy.

On our 5th anniversary, our Facebook audience is approaching 3,500 fans. According to Facebook Insights, we had 1,072,824 impressions in the first 6 months of 2014.

On Twitter, CaryCitizen is approaching 2,000 followers. In the first 6 months of this year, our Twitter stream has had 1,952,820 impressions.

Since 2009, we’ve had many, many contributors who added their insights and their voices to CaryCitizen. Here is just a partial list.

Thanks also to our family of more than 100 advertisers and sponsors. It wouldn’t be possible without their support.

Since the beginning, we’ve run our own ad server. All the ads that appear on CaryCitizen come through our hands – no Google or Yahoo ads. Here’s some ad stats for the first five years:

The average CTR for banners on the web is .10%.

Stats from Open X and HubSpot.

Thanks to all our friends for 5 great years!