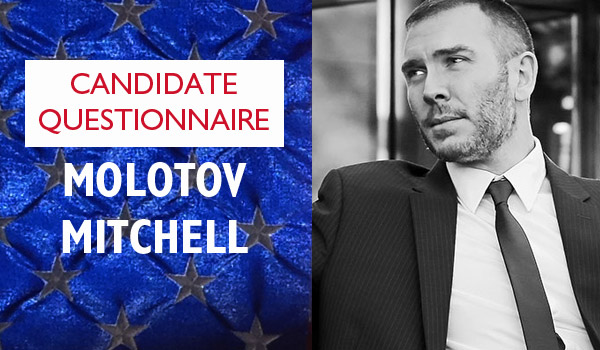 Cary, NC — This is the fourth installment of our Candidate 2014 series, in which candidates get to respond in their own words to the same three questions.

As usual, we publish the responses in the order we receive them. Next up is Molotov Mitchell, running for the District 16 seat in the NC Senate.

Q: Why are you running?

I believe that North Carolina is the greatest state in the Union. District 16 is at its heart. As a small business owner here, I’ve supported the great strides we’ve made as a state since 2010, when Republicans were put in charge. With small government conservatives at the helm, we’ve gone from being the 44th worst tax environment in the nation to 17 in just four short years. We’ve seen expansion of liberties and thoughtful economic solutions. We’ve seen the single largest investment in education in North Carolina’s history. But at the same time, I’ve watched the Senator of District 16 vote against all of this progress and engage in irresponsible rhetoric from the Senate well.

In one tirade, he said Republican legislators posed a greater threat to North Carolinians than Islamic radicals. Meanwhile, he has wasted his time on outrageous causes like trying to get transgender curriculum into kindergartens. Worst of all, he acknowledges that he can not get anything done for his constituents but fully expects their votes in this current election because it will help him run for Attorney General, years from now. District 16 desrevs better. We have an economy that’s larger than states, even countries! We deserve a Senator who cares and understands our needs. We deserve a Senator who can get things done for us.

As a Republican, I look forward to working hand in hand with the conservative majority to continue the Carolina Comeback. And I’ll do that by fighting for Privacy (investigating, and if necessary, removing the NSA spy facilities on NC State’s campus), Prosperity (cutting taxes and eliminating unnecessary, job-killing over-regulation) and Protection (taking the safety of my constituents seriously and preserving their Second Amendment rights, among others). The #Liberation of District 16 is Under Way!

Q: What are your top 3 priorities and how will you get it done?

Q: Give us a brief bio and tell us about your relevant experience.

I’ve been blessed to have a rich diversity of experiences in life. I learned to read in a church-sponsored, inner city outreach program, where I was one of only 3 Caucasian children to attend. Half of my childhood was spent being raised by my single mother before moving to North Carolina to live with my father and step-family. After high school, I spent a year living among the homeless population of North Carolina, in an effort to understand their challenges. It was during this period that I began studying world religions, before ultimately converting to Christianity. As a Christian, I’ve studied and embraced concepts like free will, private property and redemption, themes that would ultimately shape my political worldview.

My wife Patricia and I got hitched in our early twenties. We’ve been happily married for 10 years and have one especially beautiful daughter, Ivy. As members of Mensa, the world’s oldest high IQ society, both of us are thoughtful people. Unwilling to take on school debt, we chose to bypass college entirely. Instead, we spent those critical years creating what would become an award-winning motion picture company. Over the past 10 years, through that company, we’ve created hundreds of projects, traveled the world and reached tens of millions.

I’m also the owner and Chief Instructor of the Triangle Krav Maga schools, where students learn Krav Maga (the official fighting system of Israeli Defense Forces) and firearms skills. I’ve personally taught counter-abduction courses to persecuted Christians in other countries, and hand-to-hand tactics to both regular and special ops units. This year, we traveled to Moldova, the engine for the sex trade in Eastern Europe, to teach women and children rape prevention and counter-abduction.

As a voter, I remained unaffiliated until 2013, but as liberal extremists like my opponent and their policies continued to let the people of District 16 down, both economically and socially, I chose to pick a side and get involved. Far Left extremists like Josh Stein have driven me from my peaceful purple sanctuary into some deep red territory…I’m a Republican now. I am committed. And this year, we are #Liberating District 16. 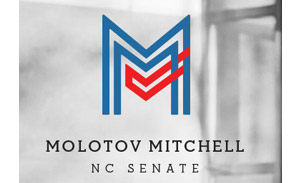 Coverage on CaryCitizen is sponsored in part by Waverly Place in Cary.