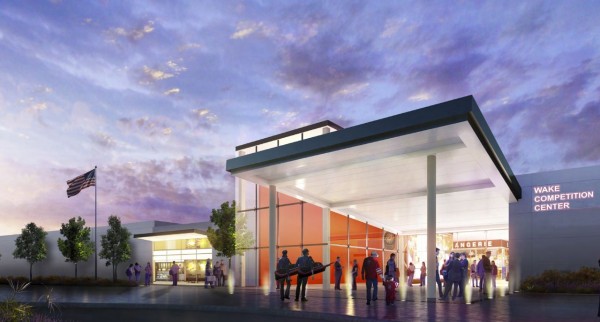 Morrisville, NC — Jeff Ammons, president of Ammons Building Corporation, created The Factory from an abandoned Wake Forest warehouse ten years ago. He has plans to bring something similar to Morrisville–possibly as early as 2016.

The Factory project combines active sports such as baseball, skating, gymnastics, tae kwon do, indoor soccer, and inflatables with a mix of 27 tenants including the YMCA and several restaurants. It’s a true destination entertainment center like nothing else in the Triangle. The unique renovation re-purposed a total of 200,000 square feet.

After finishing the project, Jeff always wanted to take on another, but he knew that The Factory had been a unique opportunity.

Then Jeff heard that the Wake County Commissioners had put out a call for proposals in early 2014 to utilize $6 million in hotel and meals tax money. He eagerly started to work on a proposal to bring something like The Factory to Morrisville. With Morrisville’s excellent demographics and central Triangle location, he focused on the undeveloped land near I-40 that will soon open up after McCrimmon Parkway is extended. Known as the NC 54 Bypass-McCrimmon Extension, the road construction is tied to a bond referendum approved by voters in 2012.

Of the dozen projects that were proposed to the commissioners, they narrowed it down to two. Jeff’s proposal, dubbed the Wake Competition Center, was awarded $3 million to be paid upon completion of the project. That money is a small percentage of the overall $15 million that Jeff has budgeted.

Jeff’s original rough draft proposal shows five buildings in a campus-like arrangement on roughly 20 acres. The first phase building of the Wake Competition Center will house twin ice rinks with a proposed 1,200 seat viewing capacity. The Polar Ice House (which also tenants in The Factory) are partners and consultants on all ice rink specifications, and the Carolina Hurricanes plan to make the site their official practice home. The facility will have the required locker room configuration and other details necessary to keep a professional team happy. When the Hurricanes aren’t there, ice time will be used by leagues, figure skaters, camps, and recreational lessons to the public.

The other buildings are still very much conceptual. Gymnastics, volleyball, and a fitness-health club component have been proposed and will be researched. The hopes are to create a competition center that will attract large tournaments and competitions in any of the sports that take residence–which will in turn pump more money back into the economy with meals and hotel stays from visiting teams.

Maybe A School One Day

One day, Jeff even hopes to offer a charter school on the property. His thoughts are to offer student athletes (and their parents) an alternative to the traditional school day. This could also maximize the use of rinks and gyms by offering sports practice mid-day, when these facilities are typically empty.