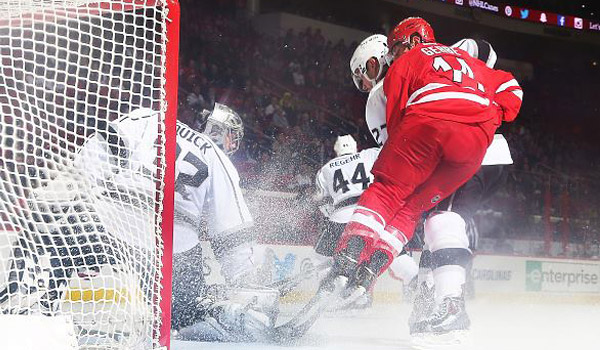 Raleigh, NC — With October in the rear view mirror, the Canes were looking forward to a new month with new and different results.  The Canes swept a short 2 game home stand, with 2 very good games against the Arizona Coyotes, 3-0 and the defending Stanley Cup Champs, the LA Kings, 3-2.

The Canes hosted the Arizona Coyotes on Friday Nov. 1st at the PNC arena and had a number of firsts early in the game.

They scored first (only second time this season), in the first period (only the third time), led after the first period, Elias Lindholm scored his first, and second, goals of the season, Alex Semin was a healthy scratch for the first time as a Cane and first time the Canes never lost the lead.

This Swede is a Sniper

The line of Lindholm, Nathan Gerbe and Riley Nash was on fire.  Their speed, skill and chemistry between each other was fantastic to watch.  Seeing how active they all are off the puck is can only be appreciated in person.

Lindholm used his size to win the puck behind the net and gave a short pass to Gerbe on the corner of the goal.  Gerbe passed back to Brett Bellmore along the side boards.  Bellmore sent a quick shot towards the net with Mike Smith making the initial save. Lindholm was cutting in front of the net and took a swipe at the rebound but was knocked back by a defender.  Still on his feet he eyed the loose puck and lifted one high that found the back of the net for a 1-0 lead.

Late in the period, after a nice save by Cam Ward, Nash brought the puck up through the center zone leading Gerbe on the left wing.  Gerbe sent a shot towards the net that was blocked but Nash was able to get it to Justin Faulk on the right point.  Faulk sent a hard slap shot that Smith stopped with his chest protector with the rebound bouncing around.

From about 12’ out, Lindholm grabbed the puck and did a sling shot stick side of Smith for his second goal of the game giving the Canes their first 2 goal lead of the season.

Tlusty At The Right Place Again

Late in the second, Smith went to the far boards and tried to lift the puck high into the neutral zone.   Faulk made a skyhook grab and smartly sent a soft slap shot to the goal.  Smith lunged back just in time but Tlusty was sitting on the doorstep for ‘thank you for the rebound and open net’ goal to give the Canes their first, solid 3-0 lead.

Cam Ward played like the Ward of old and made some aerobatic saves with leg splits, anticipated passes and shots that probably found the back of the net in the past couple of years.

Sunday’s game was against the defending Cup champs, the LA Kings with Cup MVP and former Cane Justin Williams. The Kings are on paper one very solid team but have struggled the past few games so the timing was right for the Canes to have a weekend sweep.

The first goal came late in the first with the third forward line of Zach Boychuk, Chris Terry and Victor Rask, taking control with a text book scoring play.  Rask carried the puck out of the defensive zone then passed over to Boychuk  entering the Kings end. Boychuk sent a pass across the ice to Terry who took a shot that All Star goalie Jonathon Quick made an initial save but Rask was in the perfect place for the tip in off the rebound for his first NHL goal.

Very early in the second with the Canes on a power play, Andrej Sekera was about to take a shot from the center of the blue line when he spotted Terry with his stick ready for a one timer.  Sekera made the pass and Terry got the sparse Caniac crowd sounding like a full house.  The Kings cut the lead in half with a powerplay goal that started from a bad turnover by the Canes defense.

Late in the second Elias Lindholm scored on a shot with eyes after a nice entry pass from Nathan Gerbe to put the Canes back up by 2. The Kings scored early in the third on another defensive lapse.  The Canes were trying to clear the zone but tried to be careful too much to avoid icing with the puck being intercepted at the blue line by Alec Martinez.  Martinez sent a casual shot that found the far side of the net as Ward was screened.

Ward and the defense clamped down the rest of the game with everyone contributing to the second win of the young season.

Up this week is a home-and-home against Columbus with the home game this Friday night.

Story by Bob Fennel. Photo from L.A. Kings on Facebook.