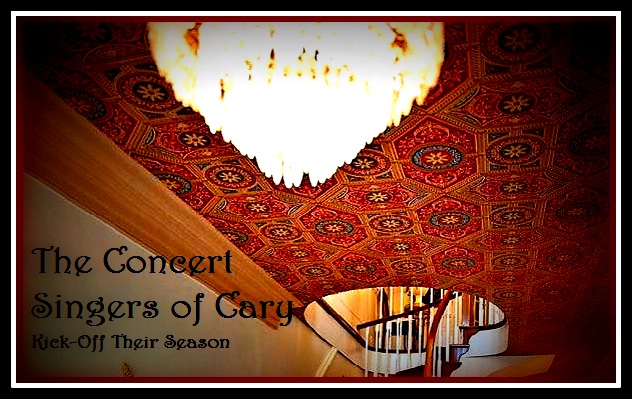 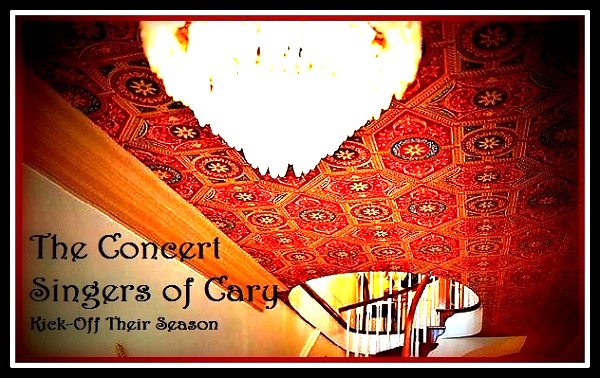 Cary, NC — The Concert Singers of Cary will be kicking off their season with a bang! They will perform two very different concerts in a short span of six days.

The first concert, titled Sonic Boom, Music for a Live Room, will be performed Sunday, November 9, 2014 at the Matthews House with the group’s Chamber Choir–which includes a select group of 37 singers. The second performance, Time and Space, returns the group to their home at the Cary Arts Center on Saturday, November 15, 2014 to be accompanied by the Chamber Orchestra of the Triangle.

Larry Speakman, Director of the Concert Singers, says he chose these two different concerts with specific ideas in mind.

Sonic Boom is part of a series he is developing called “Through The Artist’s Eye.” These smaller, more intimate settings will allow for some explanation of the music before each piece is performed. With this thought in mind, Larry picked pieces with a back story–some influenced by poetry, others with an unusual scale.

Larry added that “the acoustics of the Matthew’s House’s banquet room are ideal for this type of intimate musical performance.” He mentions that the trend in building new theater construction has created rooms that are “dry,” because they are constructed with noise dampening materials.

For the singers of a choral group, these “dry” rooms can inhibit the full sound of the range of the voices. When they are miked, that sound seems to be coming from above or beside the singers as opposed to from the stage. Larry emphasizes that, in the Matthews House, “the room will be working for you instead of against you.”

This concert will be unaccompanied–the 37 singers will be the instruments.

The hour long program includes nine pieces of music followed by a light reception where the audience will be encouraged to mingle with the performers to ask questions. Tickets are $35 per person.

Only six days later, the full Symphonic Choir will perform at the Cary Arts Center. Time and Space focuses on four composers in modern arrangements that, in some way, feature the concept of space. Three of the composers were born in the 20th century–only Beethoven is considered to be classical.

The concert will open with Toward the Unknown Region by Ralph Vaughan Williams, which is based on text by Walt Whitman and uses the terms “time & space.” Choral Hymns by Gustav Holst, another 20th century composer, will feature only the female singers accompanied by a harpist.

William Grant Still, an African-American early 20th century composer, wrote the third piece, From a Lost Continent. It is based on a dream he had of Atlantis. Much of this piece is written in a made-up language that the singers must perform phonetically.

The finale is a seldom performed Beethoven piece titled Choral Fantasy. This piano concerto with orchestra will largely be performed by the Chamber Orchestra of the Triangle, and only in the final three minutes will the Concert Singers join in. This piece is thought to have been a prequel to the ever popular Ninth Symphony, having been written during the mid-point of Beethoven’s career.

These performances are just the beginning of a season that extends through May. To see the full schedule, visit the Concert Singers of Cary website. Season tickets are $79 and include six performances, including the Holiday Pops concert in December. Children are admitted free.

Story by Lindsey Chester. Photo from The Matthews House website.