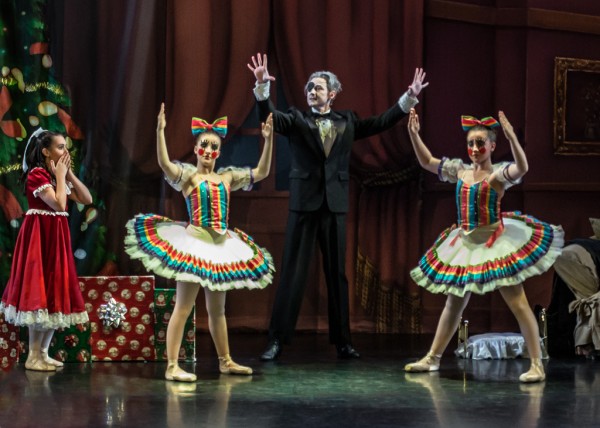 Cary, NC — Two new artistic directors at the Cary Ballet Conservatory have added their own special twist to “A Very Cary Christmas.”

The show, which started in 2007 with performances at Cary High School, was originally called “Visions of Sugarplums” and focused on excerpts from the Nutcracker performed by the company’s ballet dancers. In 2011, after the Cary Arts Center was built, the Company was granted official resident status.

It was that year that the holiday performance moved to the Arts Center and added the jazz company known as the 3D Jazz Project.

The show has two parts, one for the jazz ensemble and the other for the ballet company.

In “Miracle on Madison,” the 3D Jazz Ensemble leads the show with all new choreography from  Kathryn “Kat” Murphey. The story is about a young girl, Maddy, who lives on the Upper East Side of Manhattan and has lost her interest in Christmas. The audience, along with Maddy, will discover the true meaning of Christmas.

Every two years, the jazz sequences are refreshed. After Kat was hired this summer, she collaborated with Willie Hinton, Alina Ramirez, Tori Junelle and others to create a completely new show.

After Intermission, the Ballet Company performs “Visions of Sugar Plums” with excerpts from the Nutcracker. The audience follows Clara as she defends the Nutcracker and battles the Mouse Queen (as opposed to the Rat King– this part is danced by a female), dances in the Land of Snow and travels to the Land of Sweets. There, she meets the Sugar Plum Fairy.

Alex Tressor was hired as Ballet Director this summer. He is working with Heather Iler to put the whole story together and has re-staged the Sugar Plum and the Russian sections of the ballet. The couple came up with a new piece called “Confection,” shown when Clara is led into the Land of Sweets.

The Nutcracker costume and mask, currently being prepared by the sewing committee, are also new this year. Additionally, the props committee has created a canon that fires and has updated the grandfather clock. Watch for Uncle Drosselmeier to perform some new magic tricks.

For any ballet company, the Nutcracker is a big deal. That’s where we make our money to support our Spring Gala. It’s  a tradition when you take your family…In this day and age, when everything is changing so quickly, its a tradition to take the time to do something together. [Families] can partake of the “Ballerina Tea” before the Saturday performance and have photos taken with the dancers.

Membership to the company is by audition and, this year, 94 girls made the cut. That means that the lead roles of Clara, Sugar Plum, Mouse Queen and others are shared between performances to give these dancers an opportunity to play in a lead role that they may never have again.

Many talented dancers will leave these ranks to become members of professional companies where they must make up the ranks of the ballet core–much like a chorus. There are few leads,  even nationwide, for dancers.

Ballerina Tea is Saturday, December 20, 2014 at 10am in the Cary Arts Center. Limited tickets are still on sale.