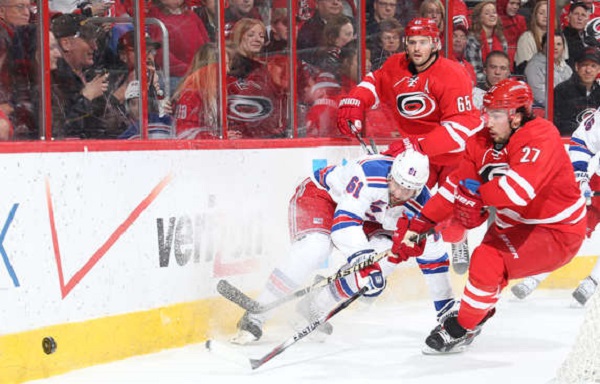 The Carolina Hurricanes finally scored more than one goal in a game and beat the Toronto Maple Leafs in a solid 4-1 game in front of friendly Caniacs at the PNC Arena last Thursday on December 18, 2014. Both teams were on six game streaks–the Canes had lost six games straight, while the Leafs were on a hot streak of six wins.

Canes Get 2 in the First

The Canes scored midway in the first. Eric Staal won a face-off in the Leafs’ end on a draw back to Michal Jordan who did a nice move to get around the defense. Jordan passed down to Nathan Gerbe who smartly reversed the flow of play going along the board.

Feeling the pressure, he sent the puck around the back boards to Staal who collected the puck and made a strong move utilizing his strength and size to get into position for a hard pass to Chris Terry, fighting for position for a perfect tap in giving the Canes the 1-0 lead.

Roughly 30 seconds later, Zach Boychuk  got called for interference and put the Leafs on a power play. The Leafs dumped the puck hard into the Canes’ end around the boards, but the puck was corralled by Gerbe who used his speed going wide up the left wing to the Leafs’ net. 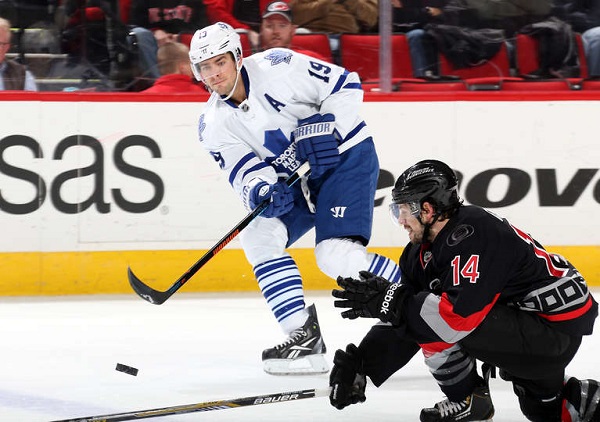 Nathan Gerbe #14 of the Carolina Hurricanes attempts to block a pass from Joffrey Lupul #19 of the Toronto Maple Leafs.

Justin Faulk, who is having a killer year, joined the rush by going wide right with a lone defender between the two Canes. Gerbe’s eyes were towards the net, but then he sent a perfect saucer pass to Faulk, who chipped in a nine-iron top corner for a Cane 2-0 lead in what felt like forever.

Cam Ward was again playing lights out in-goal and, while the Leafs didn’t get as many shots off as the Canes, most were solid scoring chances with Wardo continuing his impressive goal keeping. Late in the second, Dion Phaneuf scored from the left point on a wrister with heavy traffic in front. The Canes had plenty of scoring chances of their own, having 27 shots after the first two periods.

Midway in the third, the Canes were on a power play that kept possession in the Leafs’ end nearly the entire time. Late on the power play, the Canes had the young guns on the ice. Gerbe had the puck along the half boards and passed up to Faulk on the left point.

Faulk carried the puck to the center, passing over to Andrej Sekera. Sekera stick-handled as if he was trying to mesmerize the defense, then, with Terry in front of the net, he sent a wrister-high short side to put the Canes back up by two, and the smell of a win reappeared in the PNC Arena.

After a career year last year, this was Sekera’s first goal this season. The Leafs pulled their goalie with just under three minutes left and had their top line sending plenty of rubber towards Ward. The Canes won a face-off in their own end–Ron Hainsey passed up to Staal who brought the puck into the Leafs’ end and, in a totally unselfish move, passed over to Elias Lindholm on the right wing.

Lindholm settled the puck off the boards then threaded the puck between two defenders in front of the goal, sealing the 4-1 victory.

Canes Lose to Rangers in Shootout, 3-2

Life in general can sometimes be unfair, and it certainly seemed that way for the Canes in a 3-2 shootout loss to the New York Rangers at the PNC Arena on Saturday, December 20, 2014. The Canes never trailed in the game, going late in the third with a 2-1 lead, only to see the Rangers score with less than 2-1/2 minutes left to play. 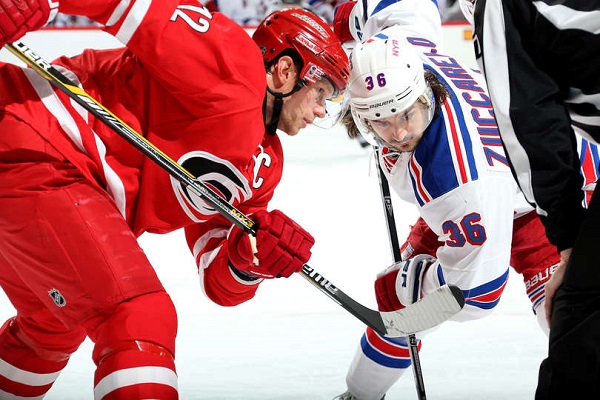 Eric Staal #12 of the Carolina Hurricanes faces off against Mats Zuccarello #36 of the New York Rangers.

After some serious pressure in the Canes’ end, in which Cam Ward was making several top ten saves, Nathan Gerbe got the puck at the Canes’ blue line then used his speed to go up the left wing to the Rangers’ end. Chris Terry seized the opportunity and went up on the right with a lone defender swinging his stick like he was swatting flies.

Like in Thursday’s game, Gerbe had his eyes toward the net but sent another perfect saucer pass to Terry, who sent a one-timer past King Henry (Henrik Lundqvist) for an early 1-0 Cane lead. The timing of the goal was as important as the goal itself, as the Rangers were clearly dominating the play for the first seven minutes and needed something to stop the momentum.

The Rangers did not let up on the pressure in the second period with several great scoring opportunities, but Wardo was well up to the task. Ward was very quick with his pads and quicker to get back up in position. The Rangers are on a hot streak, which they needed, as they were a team outside a playoff spot before the game and needed every point they could get.

Brad Malone took a poor penalty that turned out to be costly. The Canes’ man down defense was thwarting and frustrating the Rangers for the first minute of the power play, as they could not get the puck over the blue line. On a play the Canes defense would like back, the defense-men were wide, leaving the center open.

The Rangers are known for head-man passing, and J.T. Miller seized the opportunity and got the head-man pass at the blue line, went in on Ward untouched, and put it away to even the score at 1-1. The Canes won the ensuing face-off and dumped the puck deep in the Rangers’ end.

Jeff Skinner was fore-checking and forcing the defender to pass up along the boards. Justin Faulk stopped the puck in the neutral zone and tipped it to Elias Lindholm. Lindholm banked a pass off the boards to Skinner who put on the jets, went along the boards and, in an Erik Cole power move, went to the net and sent a backhander five-hole for a 2-1 Cane lead.

Late in the period, the Rangers kept possession deep in the Canes’ end. Chris Kreider passed over to Kevin Klein at the left point who sent a wrister that had eyes as it found the back of the net to tie the game. The combination of the poor record of Canes scoring a goal in a shootout along with Lundqvist’s impressive shootout save record was too much for the Canes to overcome and, predictably, the Rangers won.

The next home game will be on Monday, December 29, 2014 against the Canadiens.