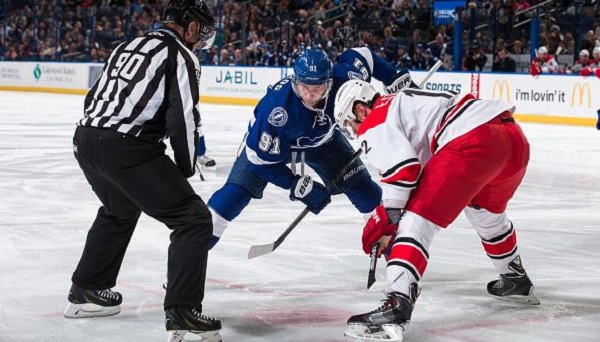 Raleigh, NC — Wow! That just about sums up the Canes’ impressive 4-2 win over the Eastern Conference leaders, the Tampa Bay Lightning Bolts, in the first game after the All-Star break at the PNC Arena on Tuesday, January 27, 2015.

For the third time this season, the Canes kept one of the NHL’s best, Steven Stamkos, off the scoreboard. That alone has bragging rights, despite the Canes losing the season series 2-1.

As much as everything went badly for the Canes in the forgetful month of October, just about everything went right for them in this game. Both teams set the tone for a battle as the top lines started, and it was non-stop action from the drop of the puck.

The Canes immediately got the puck deep in the Bolts’ end after the initial face-off. With Jiri Tlusty putting pressure on the defense, the Bolts attempted to clear the puck around the perimeter of the boards behind the net. Jordan Staal used his size and speed to stop the puck going over the blue line and shoveled a pass to Eric Staal.

EStaal took the puck along the side boards and made a power move towards the net with Tlusty charging the net. EStaal attempted a backhanded dish to Tlusty, but the puck hit the defender’s stick and floated over Ben Bishop’s right shoulder for the earliest goal, 22 seconds, of the season for the Canes.

Just five minutes later, Victor Rask won a battle along the near half board while keeping the puck alive in the offensive zone and sending it far-point to Brett Bellemore. Bellemore took a shot that was going wide that Elias Lindholm, who was camped out in the dirty are of the crease, tried to tip towards the net.

The puck still went wide and bounced off the back boards but, with speedster Nathan Gerber crashing the net like a power forward in basketball, he snapped the puck in for a 2-0 Cane lead. The Bolts scored late in the period on a goal that was no fault of Anton Khudobin’s, as it appeared to bounce in off a leg or skate with bodies sprawled in front of the goal.

In the second, the Canes scored on their first power play. JStaal won a face-off in which the puck ended up along the back boards. EStaal out-muscled the defense-man to shuffle the puck up the boards. JStaal touched the puck, but Justin Faulk went to the mid-boards to retrieve it.

With Jeff Skinner going to the wall, Faulk carried the puck to the high slot about 10’ inside the blue line and sent a shot that bounced off the pipe into the net for a 3-1 Cane lead. In one of the few blemishes of the night, the Canes gave up a short-handed goal on their next power play.

Tlusty Seals the Win Against Bolts

The icing on the cake came just under the eight minute mark in the third. EStaal won a battle deep in the Canes’ end and passed the puck up to Faulk at the blue line. With the coaches strongly encouraging the defense to join the rush, Faulk obliged.

Faulk grabbed the puck and put on his jets to go up the right wing with a lone defender between Tlusty and himself. He then sent a nice saucer pass to Tlusty, who sent one short side to seal the game, and all that was left was blowing out the candles. Wow!

The Carolina Hurricanes’ next home game is Friday, January 30, 2015 against the Blues. Come on out and enjoy some hockey!