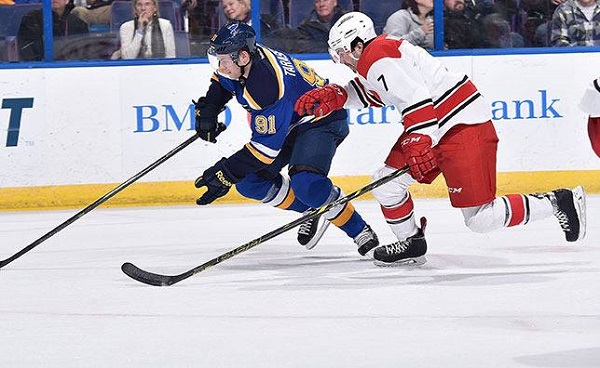 Raleigh, NC — On Friday, January 30, 2015, the Carolina Hurricanes had an October-like beginning but finished strong only to lose in a shootout of 3-2 to the St. Louis Blues at the PNC Arena. The Blues are not one of the biggest teams in the NHL, but they’re full of talent and are very well coached. Rarely do they have any missed assignments, and they have excellent team chemistry on the ice.

Early in first period, the Canes’ play brought back ugly memories of October. From the opening face-off, all the play was in the Canes’ end with Anton Khudobin facing five shots before many of the Caniacs were in their seats.

The Blues’ first goal came at just 1:48 into the game on a slick back hand pass by Steve Ott behind the goal to Ryan Reaves who sent a one timer far side past Dobby. The second goal came less than two minutes later on another Cane defensive lapse resulting in Alex Pietrangelo finding an open David Backes who buried a shot from 25’ out chasing Dobby from the goal in the earliest goalie exit for the Canes this season.

While Dobby probably wanted another shot at that second goal, changing keepers sent a message to the skaters that something had to change. The message was well received by the Canes, as their play improved significantly. The fourth line has been on fire in January, and that trend continued with a solid shift in the middle of the period.

Brad Malone and Jay McClement won their battles behind the Blues’ goal and sent the puck up to the right point.  Justin Faulk retrieved the puck and, with both forwards going in front of the net, sent a soft wrist shot that found the back of the net through all the traffic. That gave Faulk the title of the fastest Cane defender who achieved a ten goal mark in a season.

The hard-nosed level of play continued into the second period with both teams fore-checking very well. The Blues have the #1 power play in the NHL so, when Jeff Skinner got called for a trip, it was going to challenge the Canes to keep the Blues from breaking the game open.

The Canes have the third best penalty kill in the NHL, and they were up to the task as they shut down the Blues, allowing just one shot. Speed up front seems to be the key, and both Nathan Gerber and Pat Dwyer were absolutely outstanding. The fans showed their appreciation.

Right after the Canes killed the penalty, they got a power play of their own. With the puck down low, Skinner touched the puck along the boards up to Jordan Staal. Staal carried the puck up to the blue line then sent it over to Riley Nash on the right point.

One key on power plays is to move the puck quickly, and that’s exactly what the Canes were doing. Nash passed over to Ryan Murphy in the center, about 10’ inside the blue line. Murphy sent a one timer into traffic, and the puck bounced off a defender’s skate into the net to even the score. Seeing Murphy celebrate the goal was priceless, as this was his first of the season.

With the game still tied in the third, both teams stepped up their play as the game resembled more of a playoff game than a game between two teams at opposite ends of the NHL standings. It became more of a north-south contest with the game shifting between each end of the ice and basically getting off maybe one shot, then a rush, to the other end. Both Cam Ward and Jake Allen stopped everything with Ward having the most pressure.

In overtime, Coach Bill Peters had an interesting approach pairing one fast forward with one–let’s say not as fast, but bigger–forward. Each team had three shots on goal in the OT sending the game into a not-my-favorite-way-to-end-a-game shootout.

All three Canes were stopped with Kevin Shattenkirk scoring the game winner. Ward doesn’t give up a goal during the game and, fair or unfair, took the loss but did earn being one of the game’s three stars.

The Canes are on a long road trip, as their next home game will be on Thursday, February 12, 2015 against the Ducks. Great seats are still available.