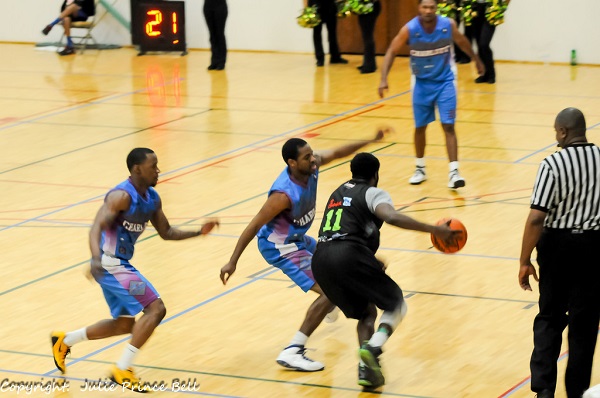 It was a game that promised to be a barn-burner–and that didn’t disappoint–when the Tobacco Road Basketball League (TRBL) West Division, the leading Charlotte Elite, traveled to Cary to face the team with the best won-lost record in the East Division, the Cary Invasion.

From the beginning tip-off, the game was a see-saw ride, with Charlotte penetrating and putting-up twos and Cary answering by using their three-point scoring. At the end of the first quarter, the score was tied 38 all. But Charlotte went cold in the second quarter–only scoring 12 points–which allowed Cary’s outside shooters, Corey Evans (32 points) and ‘Tay’ Wright (22 points), to monopolize the boards and run the score to a 20 point lead, 70-50, by the half.

Scoring was even for the third quarter with LaMarcus Letchaw (40 points) and Kevin Green (19 points) for Charlotte leading the way and Rodney Callwood (20 points) and Charles Ward (14 points) helping keep Cary’s lead solid at 100-83.

The fourth-quarter was a complete reversal of the second-quarter with Cary, untrue to their usual fourth quarter form, missing more baskets than they made. Charlotte seemed to score effortlessly, with Letchaw sinking his last of seven three-pointers. 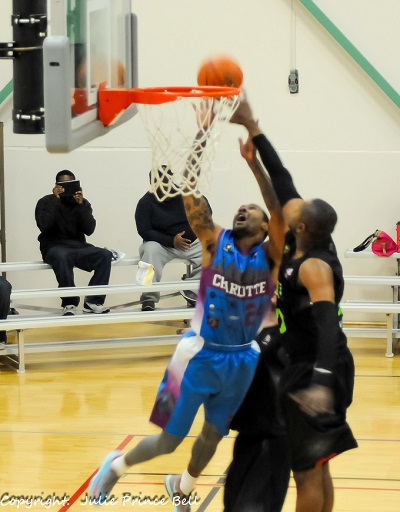 With less than a minute left, a foul sent Charlotte to the line, closing their earlier deficit and evening the score with Cary. Another quick foul, this time by Charlotte, sent Evans to the line for two that was followed by a quick steal and bucket gave Cary the last basket and the win.

Other stand-outs for Charlotte were Wiyle Petty and Cory Raley-Ross with 14 points each and Terrone Sheffey with 11 points. For the Cary Invasion, standouts were Robert Helaire with 8 points and Anton Currie with 7 points.

The Cary Invasion (8-1) will entertain the Huntersville (Concord) HoopsForLyfe (7-3) in a home game at the Herbert C. Young Community Center in Cary on Saturday, March 14, 2015. Tickets are $10 for adults and $5 for children–gates open at 6 pm; game starts at 7 pm.