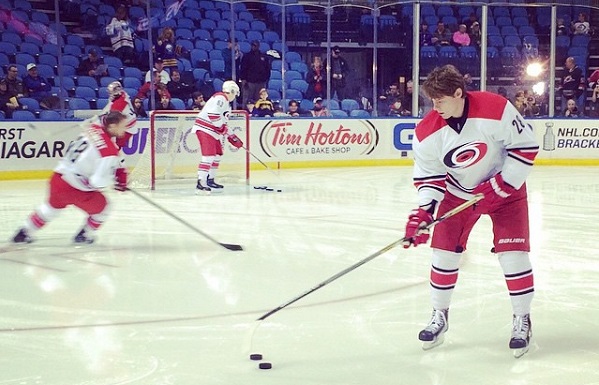 Raleigh, NC — On Saturday, April 4, 2015, at the PNC Arena, the Carolina Hurricanes won 3-2 against the Philadelphia Flyers in one of their last games of the season.

Jordan Staal looked like the Jordan Staal of old, as he was clearly the most dominant player on the ice against the Philadelphia Flyers on Saturday, April 4, 2015 at the PNC Arena.

The Canes won 3-2 in a rare shootout. For the Canes, it was a well-deserved win. The Canes should have won in regulation but will take the win anyway they can get it.

This is the last week of the season for the Canes and, with a rare Saturday afternoon game, a few Caniacs were tailgaiting and enjoying the live band on the south lawn with the fan appreciation activities under way.

The game started off sluggish, as both teams appeared to be yielding to the lack of a pre-game nap. Neither team was taking control of the game early-on with few shots and almost a lack of interest. During the first TV timeout, the coaches behind the Canes’ bench appeared to be giving advice on how ice time may be dependent on players’ effort.

The message was received loud and clear as the Canes started to check harder and shoot more. Eric Staal picked up some loose change in the neutral zone, passing over to Jordan on the left wing. With Eric streaking down the center to the goal, Jordan carried the puck into the Flyers’ end and faked going to the center with the defenseman taking the fake, allowing Jordan options of shooting or sending the pass to his big brother.

Jordan shot, but Ray Emery sent the pad save right to the stick of Elias Lindholm by coming in on the right side. He nailed it for his 17th goal and for a 1-0 Cane lead.

Jordan continued to work his magic on the ice in the second period. Ron Hainsey cleared the puck out of the Canes’ end into the neutral zone where Flyer D-man Nicklas Grossman got the puck and, while looking for a teammate to pass to JStaal, used his long reach to poke the puck free. It bounced off the boards then went inside around the defense, gathering the puck.

Like the first goal, EStaal was streaking down to the goal and giving Jordan options again and again. Jordan took the shot that hit Emery’s pad then went in for a 2-0 lead.

It was Jordan’s first goal and, while he was all smiles, what’s been noticeable in the past few games is that Eric has not been smiling after any Canes goal. Not making the playoffs has been very frustrating for the players, some more than others.

About six minutes later, Alex Semin got his stick up horizontal to the ice for a nanosecond but was called for hooking. The Canes’ penalty kill, which has been outstanding most of the season, looked like it was going to have another kill, but the Flyers scored on a wrist shot from the point through traffic in front of Cam Ward, cutting the lead 2-1.

The Flyers turned on the heat in the third, as they got nearly as many shots (11) in the 3rd as they got in the first two periods (12). The Canes also had 11 shots with only about three solid scoring chances. The Canes defense needed to remember what they did so well in the first two periods, as several times there were Flyers on Wardo’s doorstep without a Canes D-man either marking or pushing them to the side.

Very late in the period, with Emery still in the net which was a surprise, the Flyers had the puck in the Canes’ end. The Canes almost cleared the puck, but Brayden Schenn sent an innocent pass towards the net. Michal Jordan tried to stop the puck with both his stick and legs, but the bouncing puck missed everything with Sean Couturier sneaking behind the defense sending a puck five-hole to tie the game.

The overtime was conservative play by both teams. Except for the Jeff Skinner-Alex Semin line, most lines were one speedster and one shooter hoping for a breakaway that are common in four-on-fours. The Canes mustered the only shot of the OT setting up the shootout. Both Nathan Gerbe and Chris Terry scored with Wardo stopping two of three, giving the Canes the 3-2 win.

Last Game of the Season

The last game of the season is Saturday, April 11, 2015 versus Detroit. Free Canes hats will be given to the first 10,000 along with the other Fan Appreciation activities before the game, including another live band.

Usually, there are plenty of Fan Appreciation giveaways during TV timeouts, so come on out and enjoy the last game and possibly go home with an unexpected gift from the Canes.