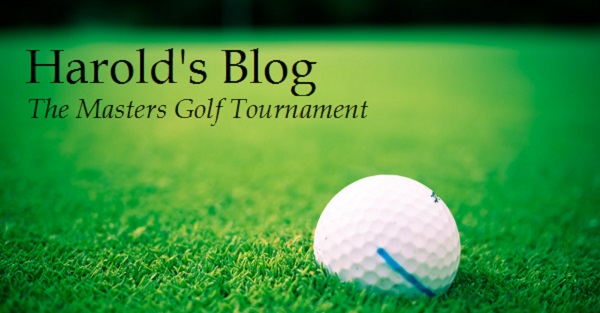 Cary, NC — This journal entry will be different from past journal entries. It will have very little to do with Cary, so it may not be of interest to some readers.

I spent the last week volunteering for the Masters Golf tournament in Augusta, Georgia. It has been an honor and a privilege to volunteer since 1978. This journal entry is about my week in Augusta and about some of my observations of the people and the place.

Augusta has three main economic drivers, the Medical College (part of Georgia Regents University), Fort Gordon (the new home of cyber security), and the Augusta National (home of the Masters Golf tournament). The Augusta National, with their buying and redevelopment of properties around the club, seems to have the biggest impact from year to year.

Most of the remaining businesses in Augusta seem to be industrial or support businesses. Needless to say, the recession hurt them a great deal, and, if it wasn’t for these three economic drivers, Augusta would be in bad shape. That is why I believe it is extremely important to be economically diverse like Cary.

Race continues to be a factor in the news and in elections. On one of my daily runs I saw a rebel flag flying in a front yard. Needless to say, that would draw a lot of negative attention here. Political signs were all Republican candidates. I imagine that Democrats don’t even bother trying.

One of the things I liked about Augusta residents is that they are friendly.

If you come across someone in a walk, run, or whatever, they always smile and say hello. In fact, cars driving by will wave. Sadly, that is not the case sometimes in Cary (so if you see me running, don’t forget to wave and say hello). Don’t get me wrong. I believe Cary is made up of great people too; we just need to show it more.

The Event and Course

There is absolutely no event of any kind in the world that can measure up to the Masters Golf tournament. Period! They have every aspect of the event down to a science, and they work every year on making it a better experience for the golfer and for the patrons.

In case you don’t know, the course was formally a nursery and each hole is named after a tree or plant. Every year, during the first week of April, the course is immaculate with flowers and trees blooming everywhere. Even if you don’t care for golf, it is a must-see just for the beauty.

The golf course is also incredible. I heard a guy in front of me say, “The stuff we are walking on is better than what we put on.” And he is exactly right. It is that manicured.

I was lucky to be invited to volunteer when I lived in Augusta in 1978. I work as a scorer on hole 17 on the big scoreboard in the middle of the course. This year, it was 90 degrees on Thursday and Friday, which made it tough since we are enclosed by metal walls. But I know people would have given their left arm to be in my position, so I was not complaining.

From my vantage point, I clearly see the 17th and 7th greens. I can see most of hole 2, all of 3, most of 8, and some of 13. I was literally right in the middle of everything. It is a great view. I intend to continue going until they stop inviting me or make me retire (which could be in the next few years). This is what the beginning of spring is all about for me. To put it simply, I love it!

For the first time in my 37 years, I predicted the winner. I was confident in picking Speith after watching him in the last few tournaments earlier this year. He did not disappoint and was dominating the course on Thursday (I haven’t seen that since Tiger’s first win).

He should have broken the tournament course record on Thursday except that for the fact that he missed a couple of easy putts. He was just as impressive on Friday and looked as though he would run away from all competitors. On Saturday, Speith had a six-stroke lead when he came to my hole on 17. Then, he double bogied, and the tournament became interesting.

On Sunday, he played like a true champion. He had his ups and downs but kept it together through it all. He won in style, and he is only 21 years old. Amazing! I suspect he will have a collection of green jackets before it is over.

Other golfers generated a lot of interest during the tournament. Tiger is back but is struggling off the tee. If he figures out his tee shot, he could once again be a force on the PGA. He had his usual following but didn’t have the masses of people that he once had. Mickelson, who is on again-off again, had a good tournament and was also a crowd favorite. Bubba Watson, who also has a good following, didn’t really do much this year, which was disappointing.

Ben Crenshaw played his last round ever in Augusta on Friday. It was sad to watch that great champion struggle. It brought tears to my eyes to see him walk up 18. I remember very clearly the last time he won. It is hard to believe that much time has passed. All in all, it was fantastic seeing all of the world’s best on the best golf course in the world. I am truly blessed.

Well, that is all for this week. My next post will be on Sunday, April 19th. Although I have Facebook and Twitter accounts those are not the best means of communications with me.

Please send all Town of Cary questions or comments to Harold.Weinbrecht@townofcary.org and email personal comments to augustanat@mindspring.com.

From the blog of Cary Mayor Harold Weinbrecht. Photo by Steve Parkinson.

Artwork from the Senior Games Exhibit
Scroll to top