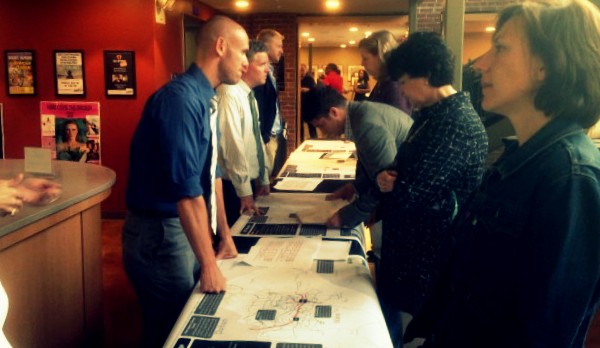 The meeting allowed attendees to provide input and to ask questions to planners from the strategy group that includes members of Go Triangle, Capital Area Metropolitan Planning Organization (CAMPO), The City of Raleigh, The Town of Cary, Research Triangle Foundation of NC, NC State University and the Raleigh-Durham Airport Authority.

A 76-member Transit Advisory Committee (TAC) that represents all the Wake County municipalities was created to develop the broad vision that shaped each of the plans. This meeting was one of several being held this month to gather much needed public feedback before the plans move forward with a possible 1/2 cent sales tax referendum.

Light Rail Off the Table

When initial discussions took place about mass transit in the Triangle, Light Rail had been a big buzzword. That is now off the table in favor of two other ideas that will use existing corridors and cost less. Those ideas are Bus Rapid Transit (BRT) and Rail Rapid Transit (RRT).

In each of these categories, there are two models–one focused on covering the most area so that all Wake residents have access (coverage), and one focused on serving high-density areas where more people will utilize transit (ridership).

Attendees to this meeting were presented with four large maps to review and discuss. Then, we rated the top three priorities that we felt must be addressed in the future of transit planning.

The ultimate plan will need to balance ridership with coverage. The plan must strike a balance of getting riders (a profitable model) but must also be fair to smaller out-lying towns that are helping to pay for these projects and have needs too (an equitable model). In the future, these outlying towns will see their car commute times double. If we put plans in place for them now, they will have options. It will also allow car-less employees to work in downtown areas.

Other issues will involve implementation. The rapid bus ridership (RBT) calls for use of dedicated bus lanes where possible to eliminate traffic hassles, yet many of the road in the plans have no room for widening (think Downtown Cary’s Chatham Street and Morrisville’s Chapel Hill Road).

This month, there will be other public meetings throughout the Triangle. Plan feedback will be complete in August 2015 at which time bill 148 has authorized the three governing bodies to move forward with a 1/2 cent sales tax to help pay for everything. Additional funds will be available through vehicle registrations to the tune of $70 million a year.

The timeline is a 10-year plan for complete implementation with some parts of the future plan being ready as soon as funds are available to increase existing bus routes. Higher infrastructure needs (right of way acquisitions and road widening or additional rail lines) would take longer to begin, but, with the goal, could be complete within a twelve year window.

To give your input, attend Cary’s next Choose Your Transit meeting:

If you would like to provide input but cannot make a meeting, visit waketransit.com to learn more about the four options and to take a transit survey.