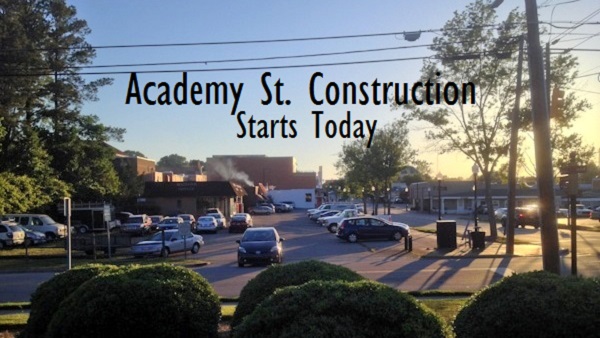 Cary, NC — Thursday, May 28, 2015 marked the groundbreaking for the re-vamp of Academy Street, Downtown Cary’s major thoroughfare, and Cary honored the occasion with a street party.

But, now that construction is about to begin, what can downtown drivers expect in terms of road closures and delays? I got in touch with Kyle Hubert, Senior Engineer for the Academy Streetscape project, to learn more about what we can expect as plans unfold.

Construction was supposed to start on Monday, June 1, 2015, but Hubert told me that, due to iffy weather, construction will start Thursday, June 4, 2015 (today) in the Kildaire Farm Road curve (two-way traffic will remain). Then, over the weekend, a new traffic control plan will be implemented. The following quote was issued from the Town of Cary:

Weather permitting, beginning June 4, 2015 at 9 am until June 5, 2015 at 6 pm, drivers should expect delays on Kildaire Farm Road from Walnut Street to Academy Street; the southbound lane on Kildare will be closed and traffic will be shifted to the center lane. Drivers are encouraged to use alternate routes; those who travel through the area should use caution.

The traffic control plan, found on the Town of Cary website, states that beginning June 8, 2015 at 10 am and continuing into the fall of 2015, drivers should expect delays in the following areas:

Pedestrian Access – For pedestrian access, a temporary sidewalk is located on the east-side of Academy Street construction 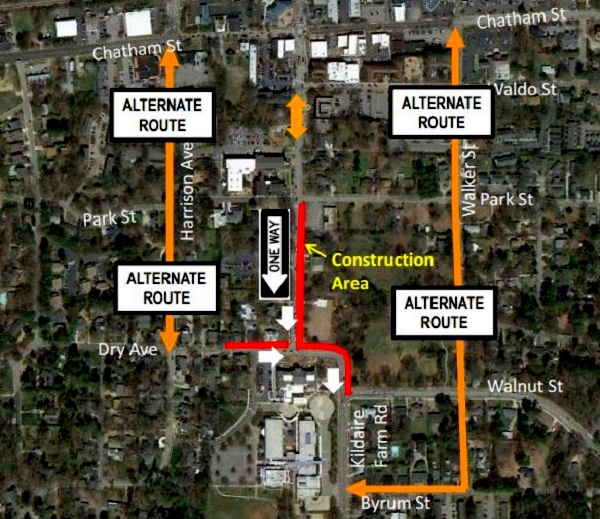 Photo from Town of Cary

A stop for local and regional transit systems has been added at South Walker Street just south of East Park Street to provide access to South Academy Street.

For the duration of construction, C-Tran and regional systems will not serve stops along:

Hubert wants the public to know that Downtown Cary businesses will remain open for the duration of the project, which is estimated to continue into the spring of 2016.

Stay-up-to-date on the Academy Streetscape project by subscribing to the project’s email list on the Town of Cary website or by monitoring CaryCitizen for construction news and updates.