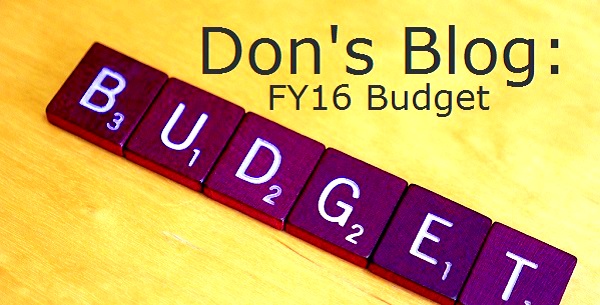 Cary, NC — The Cary Town Council has a number of key responsibilities – none more important than the town’s budget. Nor does any one responsibility require more focus, time and effort than the annual budget process. #gladit’sover

We completed that process Thursday evening (June 25, 2015) when the council unanimously approved Cary’s FY16 budget. The budget totals $295 million – $218 million for operations and $77 million for capital.

Operations is exactly what it says – the day-to-day operations of the town’s functions and departments to include police, fire, administration, public works, etc.

Capital is the brick and mortar part – the police and fire stations themselves, community centers, water treatment plants, infrastructure, etc.

The operations budget is roughly a 4% increase over last year’s budget.

This is mainly due to the addition of 25 new town employees to include an animal control officer, police officer, three new firefighters, customer service representatives and a position to administer Cary’s new open-data program. #lori’sbaby

This will increase the number of Cary town employees to 1,255, or 8.1 employees per 1,000 residents; one of the lowest employee to citizen ratios in the state and lower than last year’s ratio of 8.2. The town of Cary continues to do more with less. #carystaffisawesome

The capital budget is roughly $25 million higher than FY15 yet $25 million lower than FY14 – sounds odd I know, but, given the size and scope of capital projects, such variation really isn’t out of the ordinary. A seven mile-long water pipeline (to increase water treatment capacity and reliability) in this year’s budget is $19 million alone.

This was our second year using the new priority-based budgeting process. I talked about that change in process in my blog post about last year’s budget so I won’t repeat it again, but, if you aren’t familiar with it and would like to learn more, please click here.

I prefer this method over the previous as it better removes politics from the process. Priorities are ranked by staff based on factual data and need – not politics. #politiciansruinstuff

The first draft of the budget presented to council recommended a three cent tax increase – two cents to cover the voter approved bond projects and an additional cent to cover a projected loss of $1.5 million in revenue as a result of the North Carolina General Assembly’s elimination of the business privilege license tax. #thanksformakinguswholeguys

However, after updated revenue and spending projections – not to mention a lot of calculating and recalculating by the fine folks in Cary’s budget office – it was determined that the third cent increase was no longer necessary.

To give an idea of just how hard Cary staff worked to squeeze every penny possible, after re-evaluating interest rates and current rates of return, they found an extra $340 in Cary’s fleet fund investment earnings. Seriously, in a $295 million budget, they worked to find 340 bucks. #Karlthebudgetslayer

Other notable items in this year’s budget include:

Not surprisingly, there just isn’t enough money to do everything the town would like to do. To add anything into the budget means something has to come out. It’s really no different than how you prioritize and balance your own budgets. Do you get the new roof or paint the house instead? Do you buy a new car or keep the old one going another year? #Iknowagoodmechanic

That 800 grand in sidewalk improvements above was originally projected at $1.6 million. But, to help eliminate that extra cent tax increase and make the desired improvements at Morrisville Parkway and Carpenter Upchurch, something had to give.

That’s but one example of the trade-offs we made.

I can’t thank the folks in Cary’s budget office, our department directors and our Town Manager Ben Shivar enough for all their efforts. This was, in my opinion, one of our more difficult years given the continuing challenges with the economy and changes in state law – not to mention we had already cut quite a bit in previous years to cope with the recession.

Special thanks also to the many citizens who provided input during the budget process – it was very helpful as we worked to better identify what was most important to the community. #ilovecary

From the blog of Don Frantz, Member of the Cary Town Council District B. Photo by Simon Cunningham.

Exercising Safely in the Summer Heat
Scroll to top