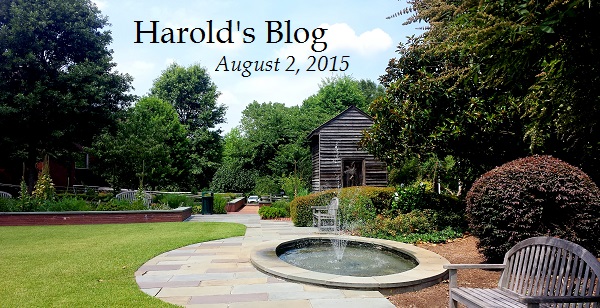 Cary, NC — This week was a typical non-council meeting week made up of mostly meetings.

Monday, I met with a representative of CALEA (the Commission on Accreditation for Law Enforcement Agencies) for our police department accreditation. The purpose of CALEA’s Accreditation Programs is to improve the delivery of public safety services, primarily by:

CALEA’s goals are to:

They spoke highly of our police department and I believe the interview went well.

When the Holly Brook sewer system failed in the early 1990’s, the Town worked with the homeowners and Wake County on a mechanism whereby the Town would receive wastewater from the subdivision and treat it at the South Cary Water Reclamation Facility. Twenty plus years later the residents came to the Town requesting annexation.

Unfortunately, the statutes changed and the Town was unable to make this happen without legislative action. Representative Nelson Dollar, Senator Tamara Barringer and the entire Cary legislative delegation supported the Town’s request for annexation on behalf of the residents. The bill passed and Holly Brook became part of the Town of Cary on July 1. Town staff, Mayor Pro-Tem Smith, and I were on hand to answer questions and talk to the residents.

I was there a little over an hour.

Tuesday I met with the town manager, deputy town manager, and assistant town managers for our weekly meeting. In our conversation, we discussed scheduling issues and for-profit requests for town services. Our meeting lasted about half an hour.

Later Tuesday I met with a developer, the developer’s representative and a property owner about a proposal at Ten-Ten and West Lake Roads. We discussed the merits of the project and concerns that I and others have expressed. Our meeting lasted about half an hour.

Positioned to begin at the conclusion of the US Open, the Cary Tennis Championships, an ATP Challenger Tour Event, will attract many of the top ATP professionals and capitalize on the excitement created from the biggest Grand Slam. Cary is afforded the opportunity to host this annual event as a result of our efforts to get the United States Tennis Association (USTA) Training Center here.

Although we lost that effort to Orlando and Mickey Mouse, we did make a huge impression on the USTA. The tournament will be the week of September 14, 2015, and I hope everyone will show up and show the USTA how many tennis enthusiasts we have in Cary.

Friday, I had the privilege of participating in the retirement ceremony for Police Chief Pat Bazemore. What an amazing person! We will miss her greatly.

She became a mother and a high school dropout at 17, but her determination and drive led her to be one of the greatest law enforcement officers in Cary history. She had many firsts as a first DARE officer, first School Resource Officer and first female Sergeant, Lieutenant, Captain, Major, Deputy Chief and, of course, Chief.

She was a leader in the state and represented Cary well as:

Through her leadership, Cary became and remains one of the safest places in America to live, work, play and raise a family. God bless her!

There is an ongoing process for selecting the next police chief. Deputy Chief Godwin will be acting as police chief during this time.

Emails from staff include the 2015 2nd quarter report. Here are some of the notable items:

Emails from citizens this week included a comment about the US Postal service, a complaint about cable installation, and a conspiracy accusation from a Morrisville resident about my vote on the golf course amendment.

Next week’s activities include several meetings, several candidate meetings, a quasi-judicial hearing, a meeting with consultants about hiring the next town manager and an event with the Friends of the Page Walker Hotel.

Well, that is all for this week. My next post will be on Sunday, August 9th. Although I have Facebook and Twitter accounts those are not the best means of communications with me. Please send all Town of Cary questions or comments to Harold.Weinbrecht@townofcary.org and email personal comments to augustanat@mindspring.com.