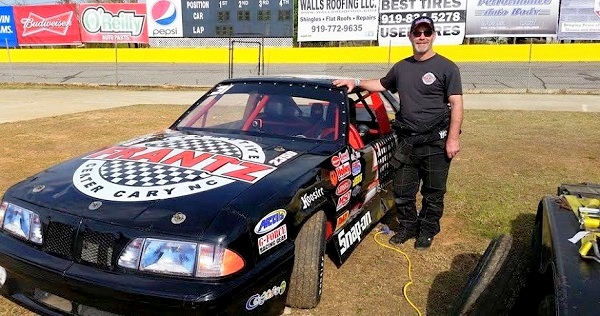 When we found out that Cary Town Councilman Don Frantz just won his race at the Wake County Speedway (congrats, Don!), we asked him to share with us his racing history.

Don has been racing a little over a year – he ran five races last year and the full season so far this year. Don built his first race car over eight years ago and planned on racing it then, but, with council, work and family responsibilities, life got busy. 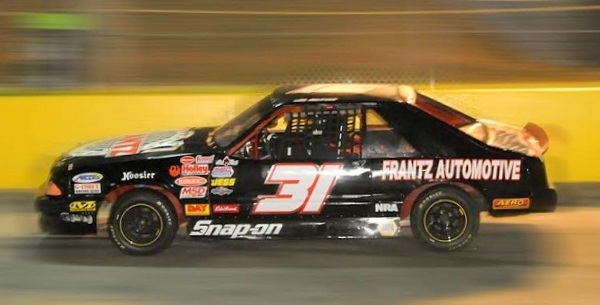 Don’s car sat in a barn for almost seven years until he decided to make the time for it. “I ran that car last year and did pretty well, but the car wasn’t up to speed with the front-runners. I bought a new car during the off-season and have used that car this year – it’s much faster,” he told us.

Don’s brother, Dan, and his son, Jordan, serve as his spotters (the guys on the radio who let him know what is going on around him and help keep him out of trouble) and help with crew responsibilities. Don told us a little about those responsibilities:

We make a number of changes to the car in between races trying to find more speed. We’ll change spring rates, different sway bars, tire staggers and shock combinations in hopes of shaving a tenth or two off of the lap times. We started the year running 15.5 second laps. Now, we are running 15 flat and hope to get to the 14’s.

Don told us that he also couldn’t have won his race without the guys at Frantz Automotive. “The guys here at the shop – especially Carson – help me work on the car between races,” Don said. “In racing, the driver seems to get most of the credit, but it’s a true team effort.” 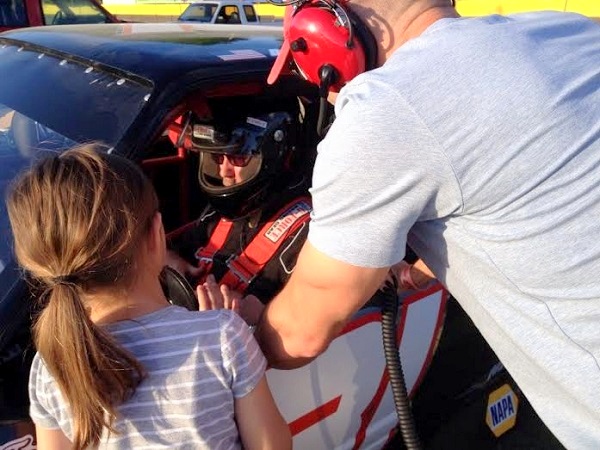 Don’s First Victory of the Season

Don sent us a recap of last week’s race where he took first place.

Don started the race second before passing opponent Justin Fussell at the halfway point of the race. A late race caution gave Fussell one last opportunity to try and catch up with Don, but Don as able to hold everyone off and led the remaining seven laps to take the checkered flag.

“It’s such an amazing feeling to finally win one,” Frantz said. “We’ve been working so hard all season long and have gotten better each race, so we knew we were going to get one sooner or later. I am especially pleased that we didn’t luck up into this one because of someone else’s misfortune – we beat them straight up and passed the track champion for the win!”

Watch Don’s most recent race or check his YouTube channel for more videos. Don’s remaining two races of the season are scheduled for September 4 and 18, 2015 at 8 pm.