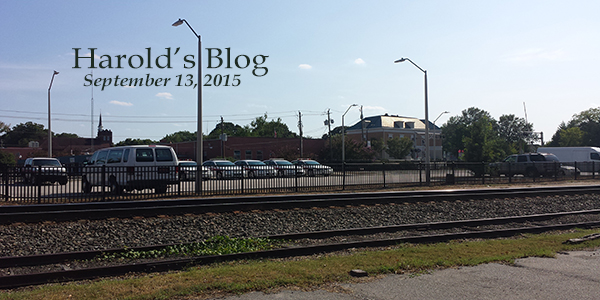 On Labor Day, I, like many, labored with yard work instead of relaxing like I should have.

Later Tuesday, I met with management, administration, legal, and public information to go over the agenda items. The agenda had no public hearings and four straightforward items for discussion. I anticipated that Thursday’s meeting would last about half an hour.

After the agenda meeting, I met with the town manager, deputy town manager, and assistant town managers. Some of the items we discussed included the downtown park, the downtown library and the associated zonings needed to move those forward. We also discussed fiber installation by AT&T and Google, the Wake transit plan and Lazy Daze.

Thursday began with a taping of a winter weather public announcement.

It was taped at the Garmon Operations center in front of the salt and two of the big plows. I wore an overcoat and held gloves in my hands. I was supposed to wear a scarf, but they thought it was a bit much. It will be amusing this winter seeing this message and knowing it was taped in the summer and that I was sweating under the overcoat.

Thursday, I met with a group from Hindu Swayamsevak Sangh. They are on a mission to meet with elected and service officials to honor their service.

To do this, they tied a thread around my wrist (called Raksha Bandhan) and explained that Raksha Bandhan is a celebration of interdependence in our society. That is, they rely on me and support me, and I vow to support them.

Police Chief Godwin was also honored in the meeting.

Thursday night, the council held its first regularly scheduled meeting of the month. There were no public hearings, and council unanimously approved all discussion items.

Those items included a project list for consideration to CAMPO, a sign for all of our sister cities, a bid award to build the downtown park and funding for artificial turf fields in Cary.

Our open session lasted only 14 minutes. We then went into closed session, which lasted about 10 minutes. While it was nice to have a short meeting, the last meeting in September is shaping up to be one of the longest meetings in the last eight years. So I guess it all balances out.

I spoke to them about citizens, communities and what I do as mayor. I was followed by police officers who the students seemed to be much more excited about. In fact, when asked how many want to grow up to be police officers, most of them raised their hands. The visit was a lot of fun and I hope I get invited back in the future.

Saturday morning, I joined about 50 volunteers at a SPRUCE beautification event commemorating 9/11 and honoring Cary’s firefighters.

We built a fenced-in raised garden for fire station 4 on Old Apex Road. The fire fighters will use the vegetables from this garden in their meals at the station.

Saturday night, I joined a fundraiser by a local organization called Different But Able.

This organization’s purpose is to upgrade the quality of life and education of disabled and special needs children in India. This includes medical support, research, publication, empowerment, training and development of rural sectors. I provided welcoming remarks and then enjoyed the fantastic talent from several youth groups.

I hope this organization increases its presence not only to help those in India but to bring us together as a community to share a common goal.

Sunday, I attended the 5th anniversary celebration of Mosaic Church.

It was not a traditional Christian worship service that I was used to but a great service none the less. I was asked to make a few remarks. I congratulated them on their five year anniversary and thanked them for their service to the community.

Email from citizens this week included:

Next week’s activities will be participating in Cary’s Pro Tennis Championship’s Pro-Am, attending a meeting of the Capital Area Metropolitan Planning Organization and attending the Parks, Recreation and Cultural Resources annual volunteer picnic.

Well, that is all for this week. My next post will be on Sunday, September 20th. Although I have Facebook and Twitter accounts those are not the best means of communications with me. Please send all Town of Cary questions or comments to Harold.Weinbrecht@townofcary.org and email personal comments to augustanat@mindspring.com.

Photos: Pickin’ in the Pines