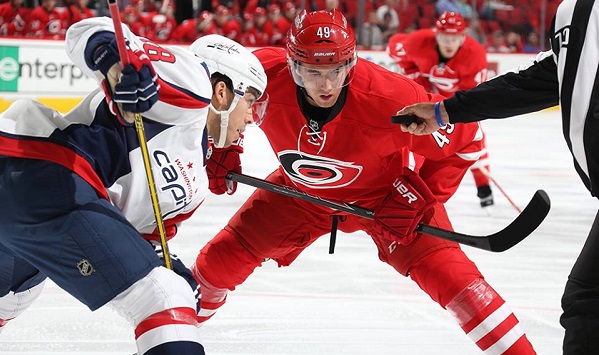 Raleigh, NC — The Carolina Hurricanes beat the Washington Capitals 4-3 in their preseason game on Wednesday, September 30, 2015 at the PNC Arena.

Several CaryCitizen readers saw the Carolina Hurricanes open their 2015-16 preseason game with a 4-3 victory with Jeff Skinner and Nathan Gerbe scoring in the shootout after an exhausting 3-on-3 sudden death. This game was one of the three games offered to CaryCitizen readers, and we’ll take the credit for the support that lead to the win.

The game started out as bad as possible for Canes goalie Eddie Lack.

Alex Ovechkin carried the puck across the Canes’ blue line, split the defense then put the first shot of the game past Lack with just 20 seconds gone. Just about four minutes later, the Canes’ top line of Eric Staal, newcomer Kris Versteeg and Elias Lindholm were aggressive on the forecheck deep in the Capitals’ end.

Staal won a battle behind the net, passing over to Versteeg inside the far face-off circle. Lindy used his size to get into the dirty area of the slot when Versteeg made a crisp pass along the ice that Lindy swatted the puck to just inside the right post to tie the game.

As the game progressed, it became a game of answering an opposing goal.

The Caps answered first, just 32 second later, on a shot by Stanislav Galiev from inside the face-off circle to Lack’s far side that he, no-doubt, wanted back. Both teams settled down with closer checking with much of the play between the blue lines.

Canes Tie It in the Second

The Caps went up 3-1 early in the second when Michael Latta beat Lack after a scrum right in front of the crease. Take that as a learning lesson of what needs to be done.

Ron Hainsey was up on press row near me and, as a defenseman, his expression made it clear that he wasn’t pleased and that he probably made a mental note of some words of advice for some of the younger defensemen. It was the Canes’ turn to answer just 30 seconds later when Riley Nash was left alone in the slot to put a one-timer in to close the gap 3-2.

I question the official scoring, as the goal went unassisted, but it clearly looked like Jordan Staal made the pass. About two minutes later, the Canes had their first 5-on-3 powerplay of the preseason and made it count. EStaal won the face-off, drawing the puck back to Justin Faulk.

Faulk and Noah Hanifin traded passes, then Faulk passed to EStaal low below the face-off circle. EStaal saw Gerbe alone in the slot, fed a pass on a silver platter and Gerbe lifted the shot high stick side to tie up the game at three apiece.

The 3-on-3 overtime is nothing but exciting.

It’s exhausting for the players, as they just finished a full game, and, with Coach Peter’s instruction, “100% on the ice or watch from the stands,” the skaters are good for one rush.

There were a couple of semi-breakaways, and the highlight was when USA Olympic shootout hero T. J. Oshie went in on Lack all alone, stopping him with a double pad save. The OT ended, and, with Skinner and Gerbe scoring in the shootout, the Canes came back for a good 4-3 win.

The next preseason game is Friday night, October 2, 2015 vs. the Penguins. Be there!

2015 Guide to Pumpkin Farms in Cary