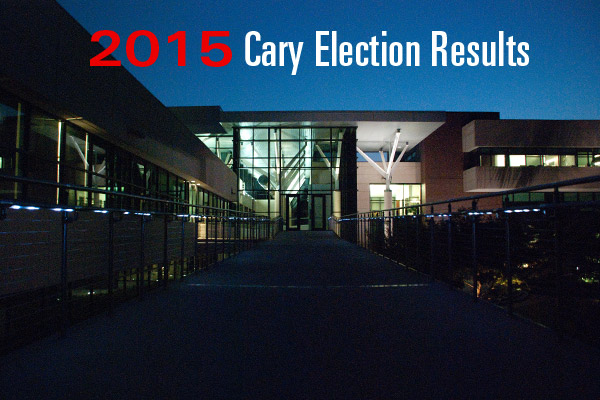 Three incumbents have been returned to Cary Town Council, according to unofficial results from Wake County Board of Elections.

Don Frantz, the incumbent in District B, bested a field of two challengers with 60.16%.

In District D, the Council seat had been vacated by Gale Adcock who left to serve in the North Carolina General Assembly. Ken George received the most votes for this district (42.23%) in a crowded field of four. Maria Cervania, who followed him with 28% of votes, is asking for a runoff.

In Cary, if a candidate receives more than 50% of votes, he or she wins. In this election, George’s shortfall to that 50% enabled Cervania, his runner-up, to request a runoff election.

Once again, a municipal election in an off-year (no presidential race) drew little voter interest in Wake County with only 11.01% of registered voters casting a ballot.

Get the full results of Cary’s 2015 Municipal Election at Wake County Board of Elections.