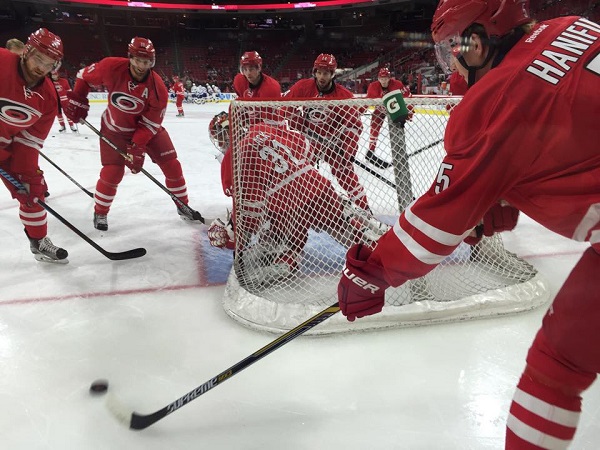 Raleigh, NC — The Carolina Hurricanes’ three-game winning streak came to an end on Sunday, November 1, 2015 at the PNC Arena when they lost 4-3 to one of the top teams in the east – the 2015 Stanley Cup runners-up, the Tampa Bay Lightning.

Eric Staal opened the scoring on the Canes’ first power play of the game around the 15 minute mark of the first period. It started up-high when Justin Faulk passed over to Victor Rask at the top of the far face-off circle, who then did a one-timer.

The one-timer was blocked by the defense towards the back boards. Kris Versteeg fought off his defenseman to touch the puck to EStaal, who camped out on the right side of the net. Staal almost seemed surprised that he had time before he took advantage of the coverage let down and sent a backhander between the wickets of goalie Andrei Vasilevskiy for a 1-0 Canes lead.

The Bolts were coming off a bad four-game losing streak and scored just two goals during that time. They’re too powerful of a team to be scoreless. Cam Ward and the rest of the defense played strong, and Jordan Staal covered Steven Stamkos like a glove.

The Bolts came out with fire in their eyes to start out the second and were out hustling the Canes from the drop of the puck. The hard work paid off just 38 seconds into the period.

After the Canes cleared the puck out of their end, Stamkos made a simple backhand in the neutral zone to the far boards at the Canes’ blue line. Elias Lindholm made a weak pass to Nathan Gerbe with Ondrej Palat intercepting, and then sent a soft pass to Ryan Callahan, who was all alone in front of Ward for the easy put-away to tie the game.

The teams settled down with tight checking, and Coach Peters made sure the right match-ups occurred to take advantage of home ice. Late in the period, with Brad Malone in the box for hooking, Stamkos sent a blast from the left point through traffic past Ward for a 2-1 Bolt lead.

What was impressive was the power behind the shot – the puck was up on-end and pinpointing to the upper corner stick side.

The Tampa Bay Lightening started the third like they started the second – strong on the puck and with great forechecking. Before the 10-minute mark, they put two past Ward and one on a backhander that Ward undoubtedly wants to have another shot at.

Unlike the Canes of last year, this team did not fold their tent but kept pressing. With less than five minutes to go, the Canes’ defense forced a Bolt turnover in the D-zone.

Rask picked up the puck and head-manned the puck to Versteeg at the Bolts’ blue line. Steeger kicked the puck between his skates onto his stick and made a dash to the goal. His shot went five-hole and was initially stopped, but Vasilevskiy’s pads were slow to pinch the puck, and it trickled in to close the gap at 4-2. Peters pulled Ward with 2:38 remaining for the extra skater.

Between Gerbe’s speed and Faulk’s attempts to keep the puck from the Canes’ end, the Canes players felt they still had a chance. Not to be denied, with 0.1 second left on the clock, Rask passed the puck up to Jordan Staal at the top of the face-off circle who sent a slap shot in just as brother Eric crossed in front of the goal for a 4-3 Canes loss.

It’s a loss, but the effort was there, and Jordan Staal finally got a goal.

The Canes have four days off to mend aches and pains before starting back-to-back home games this weekend. You can catch them at the PNC Arena this Friday and Saturday, November 6-7, 2015. Plenty of great seats are still available.

Be on the lookout for the next CaryCitizen game special!