Raleigh, NC — The Carolina Hurricanes were busy at the PNC Arena last week – first, they welcomed 2016 with a win against the Capitals on New Year’s Eve, and then they lost to the Predators two days later.

The Hurricanes stated their New Year’s celebration early with a solid 4-2 win over the best team in the NHL, the Washington Capitals, in front of a lively crowd on Friday, December 31, 2015. Many families took advantage of the super Family Night deal, and other Caniacs were already dressed for their parties later that night with formal wear and plenty of bling.

Using one of Coach Bill Peters’ coined phrases, every single Cane started on time, as both teams were playing tight with forechecking – digging hard for the puck with solid but legal banging of bodies into the boards or off the puck.

Chris Terry is known more for his shooting ability than his body checks, but, on one shift midway in the period, he seemed possessed to hit anyone in sight who was wearing a white sweater. Defenseman Jaccob Slavin, known for his solid and gritty defense, looked a bit like Jeff Skinner with a spin-o-rama deep in his end to get around a forward to carry the puck out of the Canes’ end.

While the shots were few and far between early in the period, the Canes ended with 11 shots – none by the top line – indicating how much the rest of the team stepped up. 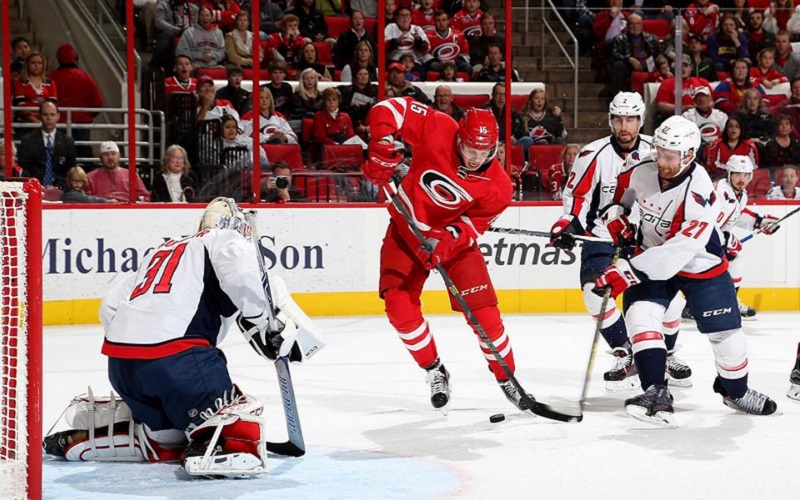 Eddie Lack was in goal and had his second very solid game in a row while beating the reigning Stanley Cup Champs, the Chicago Blackhawks, earlier this week, 2-1. He’d now beat the best team this season. Winning with his dad in the stands, who had come all the way from Sweden, had to be a great feeling. Just under the eight minute mark, Jordan Staal, with some nice stick handling, brought the puck from the Canes’ end through center ice then into the Caps’ end.

After crossing the blue line, he passed to Jaokim Nordstrom along the left half boards. Nordstrom made a gutsy cross-ice pass to Phil DiGiuseppe, who wasted no time sending a shot that hit Philip Grubauer’s stick then popped over his shoulder for a 1-0 Cane lead. Just two minutes later, Nicklas Backstrom entered the Canes’ end, waiting for a defender to get between him and the goal. As soon as he was covered, he let go a wicked wrist shot that tied the game at one a-piece.

Early in the third period, with the top line on the ice, Eric Staal carried the puck through the neutral zone, passing to Kris Versteeg on the right wing. Grubauer made the save off Steeger’s shot with Elias Lindholm picking up the rebound and passing over to Staal, who was camped out in front of the net. Staal redirected the puck to the net and started the celebration for his goal, but the ref said “play on,” signaling no goal.

Play continued for another 40 seconds before the replay reaffirmed Staal’s celebration, giving the Canes a 2-1 lead. Just over the five minute mark, Riley Nash went behind the Caps’ net and then made a nifty pass to Skinny, who slammed in his team, leading the 15th goal of the season. With the Caps digging down, trying to keep their nine game winning streak going, the Canes were equally determined to end that streak.

Exactly nine minutes after Skinny’s goal, after the Canes had a problem clearing the puck, Alex Ovechkin stole the puck and sent a wrister high glove side to close the gap 3-2. The Caps pulled their goalie with about 100 seconds to go, keeping the pressure on Lack. The puck was along the far half boards that was picked up by Andrej Nestrasil, who sent a high backhander into the neutral zone that slowly slid along the ice that ended up in the net to seal the win.

The 2016 part of the Hurricanes’ season started like the 2015 part of the season with a 2-1 loss to the Nashville Predators. The only consolation this time was that the Canes got a point as the loss was in overtime. Coming into the game, the Nashville defensive corps led the NHL with 96 points, and, by the end of the game, it was the 99th point that was the game winner.

In contrast, the Canes defense has 73 points, which is very respectable.

Former-Canes Predators’ coach Peter Laviolette has always had his teams forecheck hard and hit even harder.

This team is no different.

The first period may have been the Canes’ best of the game, but the Preds’ forechecking and hitting anything in a red sweater along the boards or with their head down had the Canes a little tentative. The Canes are a fast team, which makes them so much fun to watch. However, the Preds did an excellent job taking time and space away from most opportunities for an attack.

Just under midway in the first, Phil Di Giuseppe was deep in the Canes’ end along the half boards, passing to Victor Rask at the blue line to clear the zone. Rask made a sweet pass to Jeff Skinner in the neutral zone, who did his best Erik Cole imitation by coming down hard on the right wing, lowering his shoulder then cutting to the net.

At the net, Skinner stopped short for a skill shot, but 6’ 5” goalie Pekka Rinne used his stick to stop the shot. Rask did what all coaches in every sport preach – don’t quit on the play and follow the shot. By remembering what his pee wee coach said, Rask was able to get his stick on the loose puck and send it high glove side for a 1-0 Canes lead.

The bad news for that line during the second period was that Di Guiseppe and Eric Nystrom had their arms locked going hard towards the boards. Just as they crossed the goal line, Di Giuseppe gave Nystrom a little “hopefully unnoticeable shove” that was, in fact, noticeable and cost him a penalty and worse.

Both went hard into the boards, with Di Giuseppe getting the worst of it by not being able to return for the rest of the game. Midway in the period, Calle Jarnkrok got his second offensive zone penalty with a slash against Brett Pesce. The only saving grace Jarnkrok had for not getting in Lavi’s doghouse was when the Preds scored a short-handed goal during the penalty kill off a bouncing shot from the point after key face off loss by the Canes in their own end.

The second period was the sloppiest for the Canes and the Preds, as both teams were tight on defense, and the Preds were introducing the Canes to the boards at will.

In between periods, the Canes must have discussed the Preds hitting as a game plan, as the team used their speed and skill to gain 11 shots in the period. Eric Staal’s line had the Preds’ top defensive group against them most of the night, which is not unusual. Staal, Elias Lindholm and Kris Versteeg were all excellent in the third. Staal and Lindholm used their size while Lindy and Steeger used their skill and speed to see all three finally get off some offense. Jordan Staal, along with linemates Andrej Nestrasil and Joakim Nordstrom, is big and did a great job shutting down the Preds’ top line.

Brad Malone was the Canes’ lone wrecking machine, tallying a game high of nine hits. The rest of the Canes combined only had 19, while the Preds had 48 led by Mike Fisher (yes, he’s married to Carrie Underwood).

With the game ending in a tie, the exciting 3-on-3 followed but wasn’t as much fun as defenseman Mattias Ekholm scored against Eddie Lack for the Preds’ defense 99th point of the season.

Special note on the game – the national anthem was sung by Hurricane fan and recording artist Kasey Tyndall, who also sung along with her band in between periods.

The Canes’ next home game is this Friday, January 8, 2016 against Columbus. Be there!

Have a Birthday Coming Up?

Here’s a shout out to Canes’ ticket execs PJ and Brian for the surprise I got when they remembered and recognized my birthday on the Jumbotron last week. If a CaryCitizen.com reader attends a game on or near their birthday, let me know and we’ll arrange for Jumbotron recognition.