Monday started with a bond signing session of refinanced bonds, which will save significant taxpayer dollars in the coming years. In attendance were the acting town clerk, the interim town manager, town attorneys, outside attorneys and representatives from the financing agency. I, along with several others, signed multiple copies of documents to be used in the selling of these municipal bonds. The entire session lasted about 15 minutes.

Later Monday, I met with the interim town manager to go over multiple issues. Our talk included preliminary numbers received for the upcoming property reevaluation and how that might impact our tax rate. We also talked briefly about the recent staff-council working retreat and pros and cons of that retreat. Construction on Academy Street was also discussed. Hopefully, we will see the opening of the Dry, Walnut, and Kildaire intersection by the end of March.

Monday night, I attended a meeting of the Mayors Association. Nine mayors of the 12 were in attendance. Missing were the mayors of Rolesville, Wendell and Knightdale. Most of our discussion was updates from each municipality. It is important for us to share experiences, since some of us have already faced issues that other municipalities are now facing. We share, discuss and provide advice to each other. This is extremely beneficial especially to the newer mayors. I know their advice has helped me over the years. Our discussions also included a brief talk about the upcoming legislative session.

Tuesday, I met with representatives from Xianning, China who are interested in establishing a relationship with Cary. 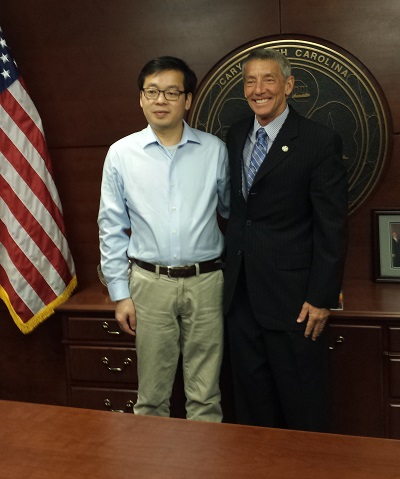 Xianning is a prefecture-level city in southeastern Hubei province of China bordering Jiangxi to the southeast and Hunan to the southwest.

It is known as the “City of Osmanthus.” A prefectural level city is an area that has been merged into one unified jurisdiction. A prefectural level city is often not a “city,” in the usual sense of the term but instead an administrative unit comprising, typically, a main central urban area and its much larger surrounding rural area containing many smaller cities, towns and villages. Xianning has a population of over half a million and covers approximately 3,800 square miles.

During our conversation, the representatives notified us that they will be sending a delegation to visit Cary in April. They would also like me to visit Xianning, but, unlike our visitors I cannot use taxpayer dollars for such a visit (nor should I).

And, unfortunately, I can’t afford that kind of a trip now. Hopefully, I will be able to visit in the future.

It will be interesting to see how this relationship progresses.

The MPO is responsible for carrying out an annual work program, a portion of which includes updating the Metropolitan Transportation Improvement Program (a seven-year project programming schedule) and the Long-Range Transportation Plan (a minimum twenty-year forecast of projects and programs).

At this meeting, there was one decision that directly impacted Cary. The MacArthur Section of the White Oak Greenway was included in the Fiscal Year 2017 projects. CAMPO will provide over $2 million of this $4 million project. The board also spent a few minutes discussing how funds of the Wake Transit Plan would be administered if the voters approve the referendum. The Durham transit has their funds administered by Go Triangle. So members stated they preferred that while others believed the executive board of CAMPO should administer the funds. We will discuss this further at a future meeting.

Later Wednesday I met with development representatives for the Singh property located at the corner of Cary Parkway and Evans Road. This property has been in front of council several times with several different proposals. In the past there has been strong resistance to proposals from the adjacent neighborhood. The sketches presented to me for my thoughts made sense for the location and would have minimal impact on roads and schools. We’ll see what they end up proposing.

While women’s lacrosse will make its debut in Cary, we are no stranger to NCAA championship competition.

The Women’s College Cup has been hosted here seven times, while the Men’s College Cup has made four appearances at WakeMed Stadium. Cary’s selection is a testament to the town’s dedication to making Cary one of America’s premier host communities for collegiate athletics. It also makes a statement about our venues and facilities, which the NCAA continues to recognize as some of the finest in the nation.

We’re honored to host this championship and look forward to greeting participants and fans alike with true Cary hospitality.

Not tolerant? Really? This made me laugh, since the person complaining had previously sent me email that the town should not tolerate Muslim organizations. I know I am stating the obvious, but council members receive criticisms, complaints, etc. on a regular basis. It is part of our job. And as mayor, I receive all of the above multiple times a day. To my knowledge, we have always listened and responded professionally. So, respectfully, I disagree.

I think we are very tolerant and respectful to differing opinions. Regarding the civility of my comments, I will try to be more accommodating to those that are ultra-sensitive to me stating my opinions.

Next week will begin with my wife’s surgery. That will keep me from attending meetings for a couple of days. The rest of the week will include a few meetings and a regularly scheduled council meeting, which should be a long one.

Well, that is all for this week. My next post will be on Sunday, February 28th. Although I have Facebook and Twitter accounts those are not the best means of communications with me. Please send all Town of Cary questions or comments to Harold.Weinbrecht@townofcary.org and email personal comments to augustanat@mindspring.com.

From the blog of Cary Mayor Harold Weinbrecht. Lead photo by Jessica Patrick. Photo with representative from China courtesy of Mayor Weinbrecht.