Cary, NC — The Cary Playwrights’ Forum will present Chakra: The Wheel of Life at the Cary Arts Center this weekend.

Chakra: The Wheel of Life

This weekend, the Cary Playwrights’ Forum will present an Indian performance filled with drama and music in the Paul Cooper Room at the Cary Arts Center in downtown Cary. “Chakra: The Wheel of Life depicts the challenges that human beings face while trying to break free from the cycles of violence and revenge that span generations,” explained Lydia Sbityakov, who is one of the story’s playwrights in addition to the producer/director of this production.

“Humans hope to overcome these challenges through compassion and forgiveness.”

The theme of this weekend’s play is as applicable to the modern world as it was to the inhabitants of India thousands of years ago, but you won’t need to speak Hindi to understand and appreciate this performance. The show Cary audiences will see starting this Friday is the new English translation of an original text written by 20th century writer Vidyadhar Pundalik. Cary resident Dr. Vijaya Bapat created this adaptation for the Cary Playwrights’ Forum.

The main characters of the play come from the ancient Indian epic, The Mahabharata. Thousands of pages long and comprised of over 100,000 couplets, The Mahabharata is said to be the longest poem ever written.

It has been a cultural touchstone for billions of people over the centuries throughout India. It is difficult to know exactly how old the original epic is, but its estimated dates range from between 400 B.C.E. and 3100 B.C.E. The tale may, in fact, have been based on real individuals and historical events but contains elements of mythology, philosophy and religion. 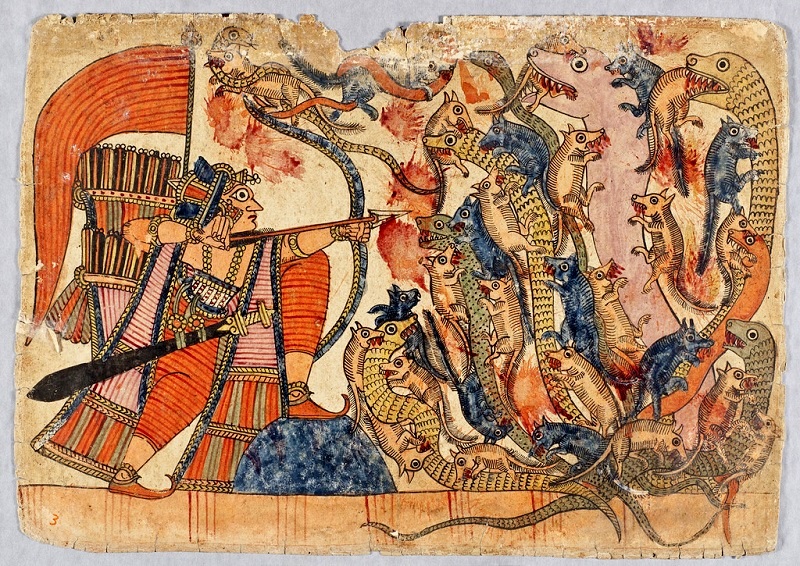 Fight of the Mongoose and the Serpent Armies – a page from The Mahabharata.

I asked Lydia Sbityakov to give me an idea of what Chakra audiences will see this weekend.

“We hope that the costumes, set and music will transport the audience back in time to the last night that Empress Draupadi spent in her magnificent palace,” she said. “The performance incorporates original music by another Cary resident – musician and composer Kalyanee Padhye. Different ragas (which are comparable to modes in Western music) express the various emotions and events in the lives of the characters on-stage.” 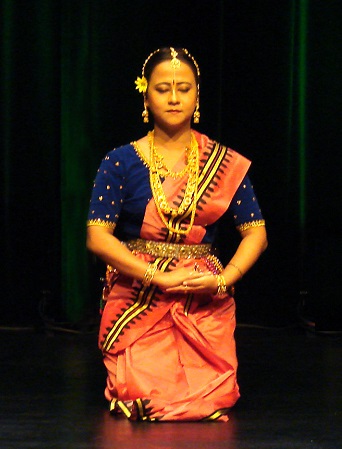 Draupadi, a main character in this weekend’s productions.

“Our hope from the beginning was to present the play in a way that would be understandable to anyone from the general public,” Sbityakov told me. In order to do that effectively, material from The Mahabharata that is crucial to understanding the play is first presented in the form of a shadow play.

Shadow play, or shadow puppetry, is an ancient form of storytelling that uses flat figures, or shadow puppets, to create cut-out figures which are held between a source of light and a translucent screen. Various effects can be achieved by moving both the puppets and the light source, and, with practice, puppeteers can make figures appear to walk, dance, laugh and more.

To prepare for Chakra: The Wheel of Life, the entire Cary Playwrights’ Forum cast plus additional artists attended a workshop early last month with Donovan Zimmerman from PaperHand Puppet Intervention in Saxapahaw to learn about the art of shadow theater. Rehearsals for this production started in January, but the project has been in the making for over a year.

Each of the three performances will begin with the shadow play immediately followed by Chakra. The run-time is approximately 90 minutes. “We hope that this will be a great introduction to the Mahabharata for those who are not familiar with the epic and that we have also been faithful to the essence of the play and the epic it is based on,” Sbityakov concluded.

Chakra: The Wheel of Life
at the Cary Arts Center, 101 Dry Avenue, Cary

Tickets are $18 for adults and $16 for students, seniors and veterans. A portion of the proceeds will benefit the Marathi language program in Morrisville that was co-founded by the translator. Advance tickets are available in person at The Cary Theater Box Office or, if available at the door one hour prior to any show on the day of the event.