Raleigh, NC — The Carolina Hurricanes defeated the Ottawa Senators 4-3 on Tuesday, March 8, 2016 at the PNC Arena.

Wow! That had to be what the thrones of Caniacs were saying after the Canes beat the Ottawa Senators 4-3 in a game that started out like a lamb for the Canes but roared like a lion at the end. Jeff Skinner led the way with two goals, and Jaccob Slavin, one of the many rookie defensemen, scored the game-winning shootout goal.

Depending on how you look at it, the Canes dug a hole – or laid an egg – early, as the Senators had two goals in the first period, both of which were results of mental lapses by Canes. The first goal came after what appeared to be a soft dump in by the Senators that Cam Ward came out to play. Ward saw Slavin coming down hard, so he made a soft pass over the goal line, yelling to Slavin to clear the puck. Slavin got the puck and attempted to backhand the puck around the boards to Ron Hainsey.

Ageless Scott Gomez, who signed a contract less than 24 hours earlier, snuck in front of Hainsey to steal the puck and tap it to Mark Stone who quickly went around the net to bounce the puck in off Ward’s skate. Very late in the first, Jordan Staal got tied up along the half boards, losing the puck.

Bobby Ryan following the play, came into the zone unchecked, picked up the loose puck and skated behind the net then did a blind backhand pass to Ryan Dzingel all alone on Ward’s left for an easy put-away for a 2-0 Senators’ lead.

One can only imagine what words and tone came from Coach Bill Peters during the intermission, but whatever was said worked, as the Canes were a totally different team in the second. Jeff Skinner carried the puck into the Senators’ zone with just one defender between Skinny and the goal. Skinner did get a shot off with Andrew ‘Hamburglar’ Hammond making the chest protector save with the puck bouncing around like a superball. At least four skaters attempted shots or clears, with Ryan Murphy the last to get some good wood on a shot. Hamburglar made another save, lunging forward with the puck, again bouncing around, with the puck ending up in the crease waiting for easy pickings. Skinner, never bashful about going to the dirty area, jumped on the puck, flipping it high and hard into the empty net to cut the lead in half.

Less than five minutes later, with Brad Malone in the box on a (weak) hooking call, Jay McClement surprised everyone in the arena but himself when he did an Erik Cole impersonation with a power move down the right wing with a D-man all over him, sending the puck in just under Hamburglar’s right arm for the Canes’ third shortie of the season. 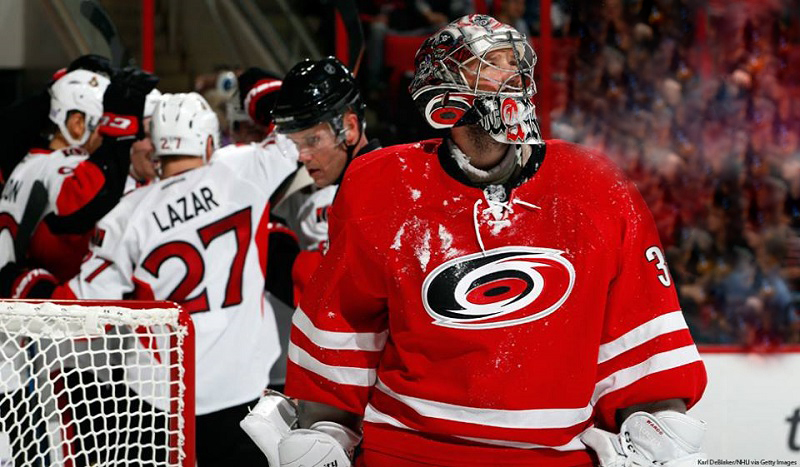 McClement was out for several games due to an injury, so coming back with a strong performance was good to see. Late in the period, the Senators added to their NHL leading shorthanded goal total when Zack Smith picked up a loose puck in the neutral zone. Noah Hanifin couldn’t make up time after being turned around, allowing Smith to beat Ward on a goal Ward certainly wanted back. Just as the horn sounded, with Eric Staal now a Ranger, someone had to get under Dion Phaneuf’s skin, and fiery Nathan Gerbe stepped up to the plate with Gerbs getting a cross-checking penalty and Phaneuf getting called for slashing. If the horn hadn’t sounded, there’s a good chance that both would have had roughing minors tacked on.

The Canes’ momentum in the second rolled over to the third, and the partial Caniac crowd was getting into the game. At one point, when longtime Storm Squad member Big Mike started tooting the horn for a “Let’s Go Canes” chant, the Caniacs responded that the refs “get a drink through a straw,” as there were at least two obvious calls that were missed.

The Canes’ forechecking in the third was excellent, and, for a game that started out forgettable, it now embraced somewhat like a playoff atmosphere, or desperation to make the playoffs, which both teams were trying to do. The Canes sent 11 quality shots on-net in the third, but none were more dramatic than Skinny’s second goal.

With Ward off the ice, the Canes won a critical face-off in the Senators’ end with just under 11 seconds remaining. The Canes passed around with the Caniacs yelling, “Shoot!” Ryan Murphy pinched and won the puck along the far boards, sending the puck down to Victor Rask behind the goal line. Rask skated up, looking for someone to pass to, but took a shot that bounded to the high slot when Skinner sent a 90 MPH slap shot in with 0.2 seconds on the clock.

Everyone was celebrating and giving high fives to everyone, including the ushers. The Canes haven’t won a shootout all year, so the hopes weren’t high. After two failed attempts, Riley Nash needed to score to keep the Canes in the game, and he put one five-hole in, sending the shootout into a fourth round. Rookie Jaccob Slavin scored on a backhander – top shelf – and Cam Ward stopped the last Senator for a nice comeback win.

The next home game is in two weeks on Tuesday, March 22, 2016 against Buffalo. Be there!

Restaurants: A Tour of Neomonde
Scroll to top