Raleigh, NC — The Carolina Hurricanes “lost one and won one” over Easter weekend at the PNC Arena. On Saturday, March 26, 2016, they suffered a loss to the New York Islanders, but they redeemed themselves 19 hours later with a 3-2 win over the New Jersey Devils.

It wasn’t a complete blowout, as the Carolina Hurricanes need every point possible, but it could have been worse after the Canes garnered three out of a possible four points over the Easter weekend. The Canes lost 3-4 in overtime against the Islanders on Saturday night but rebounded with a win over the Devils just 19 hours after the Islanders’ game.

All three teams need points, and the Islanders have the best chance of making the playoffs.

With the playoffs on the line for both teams, I’m sure Coach Bill Peters would have liked the Canes to start the game with tight checking and a stronger sense of urgency. With the Canes’ poor start, the Isles scored in the first 95 seconds on a goal Eddie Lack would certainly want back. The Canes lost a face-off to the left of Lack with Kyle Okposo grabbing the puck and sending a weak backhander along the ice towards the goal. Lack had the paddle of his stick on the ice but angled back, allowing the puck to ride up the stick and slip in under his arm for the early goal.

Late in the period, Justin Faulk’s slap shot from the right point was blocked by Nikolay Kulemin who took the puck all the way to the net, beating Lack for a 2-0 Devils lead.

The Canes came out in the second a completely different team – focused, driven, hitting hard, tight checking and grit. Not that face-off wins always lead to goals, as the Canes won only five of 12 in the first but 19 of 24 in the second. Early in the first, Jeff Skinner won a face-off in the Isles’ end with a scrum evolving in the circle. Skinny put the puck on his tape and went to the high slot. With the scrum moving to the front of the net, he sent a shot, hoping for the best.

After a few touches and a failed clear, Victor Rask was on the far side. He picked up the loose change and sent it in whatever little opening was available. A little over four minutes later, on a similar scrum in front of the goal with the Canes being relentless, Ron Hainsey sent a rocket towards the net that was headed towards the net that Skinny made sure went in to tie the game. Less than three minutes later, Ryan Murphy carried the puck from his end up the right wing along the near boards with Jay McClements and Pat Brown, playing in his first NHL game and charging the net.

Murph centered a pass along the ice that McClement somehow put in the net for the Canes’ first lead.

Hanifin Almost Wins It in OT

Very early in the third, the Canes had a delayed penalty against them, but the Isles’ power play never was needed. Casey Cizikas had the puck deep in the Canes’ end, passing to an unmarked Cal Clutterbuck in the high slot who one timed it past Lack to tie the game. The closest the Canes would get on overtime was when rookie Noah Hanifin took the puck in from the neutral zone sending one off the far post. On the next shift, Clutterbuck took a shot from the top side of the face-off circle that hit rookie Jaccob Slavin square in the chest and bounced in for the Isles’ game winner.

An Easter Win for the Canes

The Canes called in a secret weapon for Sunday’s game – the Easter Bunny.

With the Easter Bunny sounding the game opening siren and a larger crowd, what more could the Caniacs expect than a win to get the Canes closer to a playoff spot? A win in regulation would allow the Canes to lead frog the Devils, so much was on the line. The start tonight was better than last night, as the Canes’ record on back-to-back games is very respectable at 9-4-2.

The Canes were faster from the opening face-off and took charge early. One change that could – or should – become permanent was that Ryan Murphy played forward rather than back as a D-man. Murph is an excellent skater and handles the stick better than most D-men, but he’s just too small and not strong enough to handle most NHL forwards.

This isn’t the first time he’s played forward for the Canes and, frankly, he had a very good game. Nearly halfway in the period, Jordan Staal brought the puck into the Devils’ end and danced around, waiting for teammates before he saw Hainsey skating hard down the left side. Staal made a crisp cross-ice pass right on Hainsey’s tape for an easy tap-in. Just over 30 seconds later, with the Canes on a powerplay, Faulk took a shot from the high slot but missed the net.

Elias Lindholm nabbed the rebound than made a slick pass to Rask in the sweet spot of the slot, who took his time and picked out the lower stick side corner to give the Canes a quick two-goal lead. While he wasn’t part of any scoring play, Brad Malone’s gritty play and winning a short fight with tough guy Bobby Farnham certainly gave the Canes an extra spark.

Early in the second, Skinny got the puck behind the Canes’ net, skated along the boards then sent a 120’ pass to Rask in the neutral zone. Rask caught the pass, put on his jets, head-faked, faked a backhand and then sent a forehand over the Wedgewood’s stick for, what the Caniacs thought, was a strong 3-0 lead. Just about four minutes later, Malone was trying to make a clear but was hog-tied with a stick and free arm that resulted in the puck to squibble in the slot.

That darn Farnham picked up the puck and sent one past Cam Ward to break the ice for the Devils. Just 30 seconds later, the Devils dumped the puck in the Canes’ end. Ward came out to play the puck, but it was just on the line of the trapezoid, so he had to wait a nanosecond too long. Blake Pietila out-sticked Ward, sending the puck to the crease. 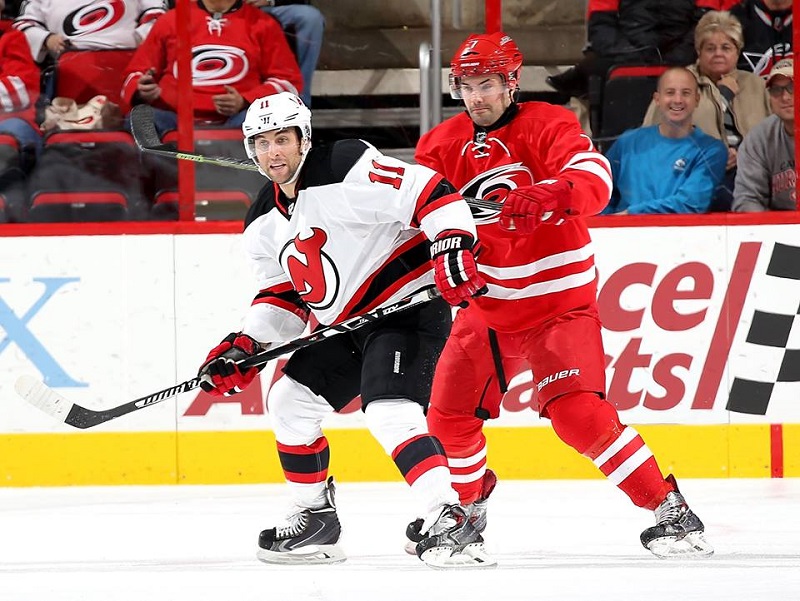 Slavin was there to block a shot, but the rebound went wide where Travis Zajac picked up the loose change, sending it in to make a game again. Two errors (okay, one by a ref) resulted into two goals.

No Scoring, but Very Exciting Hockey

The third period was hard-nose hockey, with the refs letting everything go as so often happens in third periods. Nothing was so obvious to call, and every shift by both teams was full of effort all around. There’s so much going on between players behind the puck, that, when there’s a lead, one should watch a favorite player and just see what occurs. Patrick Brown in just his second game had another good game as did Skinny and Slavin. Brett Pesce was a beast on skates.

The next home game is Thursday, March 31, 2016 against Eric Staal and the New York Rangers. Great seats are still available, and it will be interesting to see how the Caniacs will respond to EStaal appearing in a Ranger sweater. Count on the Canes doing a tribute during a TV timeout.

Also, Season Tickets purchased before May 6 have several incentives, so don’t delay!