Cary, NC – This week was not as busy as last week which was a nice change.

Monday I met with town management and budget staff for a preview of the budget. The purpose of these sessions is for staff to get last minute individual feedback from council members before presenting the budget to the entire council and the public. While I can’t go into the details of what will be presented in the budget, I can say that it will be another tight year. Also, our tax base growth is slowing which may mean higher taxes in future years. Capital projects will continue to be a challenge and my guess is we might see a bond referendum within the next two or three years. My budget session lasted a little over an hour.

After the budget session I met with the deputy town manager and assistant town managers to go over current issues. Our discussion didn’t include any new information.

Wednesday was made up mostly of private meetings.

Thursday started with me speaking to over 50 people at the Heart of Cary Monthly membership drive meeting. I gave them my vision and thoughts about downtown and downtown projects. Here are some of my opinions that I expressed:

My talk lasted about 20 minutes.

Friday I participated in a meeting of the NC Metro Mayors to review legislative actions for the week. Items discussed included:

Our meeting concluded after about 20 minutes.

Each week I receive several cards and letters. They range from formal invitations, to events, to criticism about something the town is doing. Mostly the letters are criticisms. Rarely, will I receive something nice in the mail. This week was one of those weeks. A few weeks ago I received a request from a little girl in Indiana to send a card representing Cary for her project to contact someone from all 50 states. I received a thank you card with picture and art from her this week. It is beyond cute and made my day. 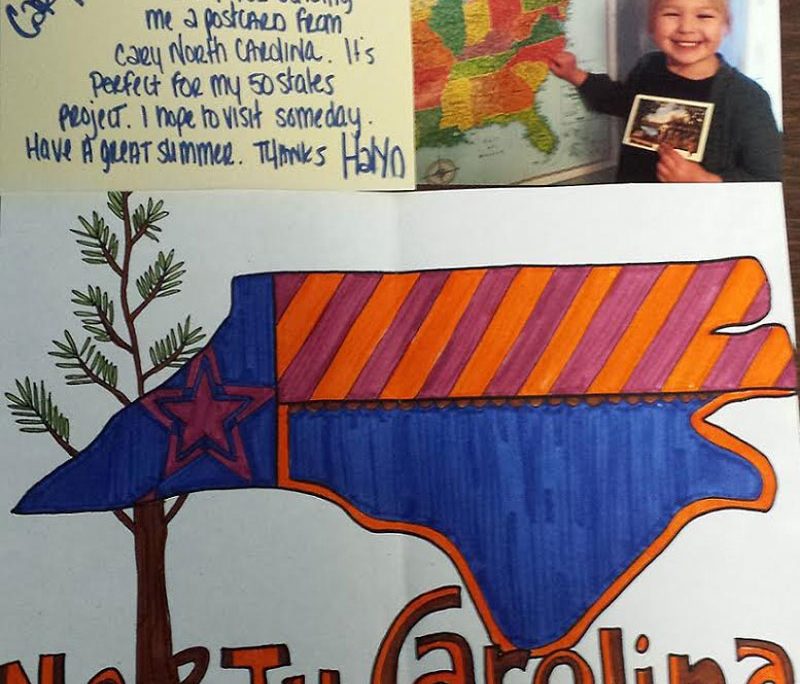 Next week’s activities will include a Teachers Award ceremony, a Cary-Morrisville join issues meeting, a regularly scheduled council meeting, and several Saturday events.

Well, that is all for this week. My next post will be on Sunday, May 15th.  Although I have Facebook and Twitter accounts those are not the best means of communications with me. Please send all Town of Cary questions or comments to Harold.Weinbrecht@townofcary.org and email personal comments to augustanat@mindspring.com.