Cary, NC – Riding in an ambulance, as a patient or especially for the child of a patient, can be stressful. But a new initiative by the Cary EMS is putting tablet computers into ambulances to make the ride more comforting.

Steve Cohen, chief of the Cary EMS, has been working in emergency services for 35 years and said patients’ emotional states have been a constant focus for him.

“I’ve always had an interest in making patients more comfortable,” Cohen said. “For a while, I’d been using music, asking patients what kind of music they would want to hear, as they’re in the ambulance.”

In his time working in emergency care, Cohen said he talked to many other ambulance services and heard that they were using tablets loaded with videos and games to relax worried patients.

“It’s scary to be in the back of an ambulance. They don’t always know what’s going on,” Cohen said. “And pediatric patients are always scared.”

As patients relax, their heart rate and blood pressure get under control and it helps the healing process. And Cohen said children also ride with their parents or guardians to the hospital so getting kids distracted from the scarier aspects of the ride can create a calming atmosphere as well. 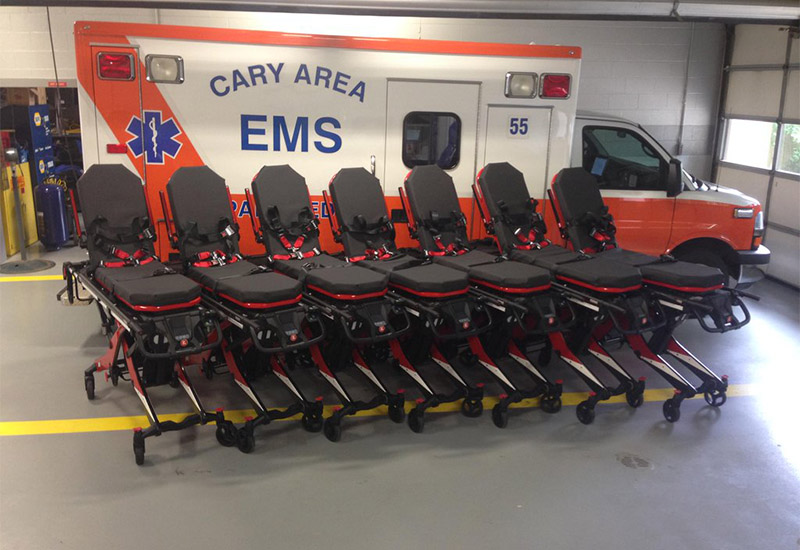 Cary EMS currently has tablets for six of its seven ambulances and is currently fundraising for the seventh. To get the tablets and the games and movies on it, Cohen said they reached out to the local business community.

“We reached out to SAS and State Farm and then we started soliciting and we know there are great partners in Cary,” he said. “They all jumped on board. It was easy.”

Other companies that donated include Target and RadioShack.

In addition to the tablet initiative, the Cary EMS has other programs to connect with the community such as free flu shot program that has been going on for 11 years. Unlike the ambulance tablets, Cohen said the flu shot program was his original idea.

“If we can reduce someone going to the doctor by not getting the flu, that’s good,” he said.

The event also brings people to the emergency and medical workers in Cary and lets them share information directly. Cohen said this year’s flu shot program will also be a good drive where people can donate canned food.

“There’s always a need for food at our food shelters,” he said.

Every April, Cary EMS also holds a citizen’s academy where they teach the “ins and outs” of emergency medical care.

“We’re part of the community and people don’t always see us that way,” Cohen said. “We want people to see us as more than the 911 people. We’ll always be here for 911 calls but we are also connected to Cary.”