Like many western teams, the Sharks are big. Make that huge. Captain Joe Thorton is six-foot-three-inches and 220 pounds and is still a force on the ice every shift. The Sharks have one player, a fourth liner, that weighed less than 190 while the Canes have seven. Not that size is the most important factor for a hockey player but size does help. GM Ron Francis has said he’d like the Canes to get bigger and he actually has a bigger team this year.

Many folks at the game commented the game was on the boring or slow side but that had to be confused with the lack of scoring. The individual battles both on and off the puck were fun to watch. The three sophomore defensemen of Noah Hanifin, Brett Pesce and Jaccob Slavin again had outstanding games. The control they all have with their sticks on defense is reminiscence of Bret Hedican or Glen Wesley.

Hedican was in the arena as he does the radio for the Sharks and is still as pleasant as ever. His favorite team to play for was the Canes and he still looks like he could lace them up and play. The Canes had more of the offensive edge in the first with one point keeping the puck in the Sharks zone for over four minutes spanning three different offensive shifts with the Caniacs showing their appreciation for that effort.

Just after the Sharks brought the puck to the other end of the ice, Hanifin got called for a very weak but by the books holding penalty. The Canes extended their streak for no powerplays for the opposition to seven games as Ward was having another outstanding night between the pipes.

PK Teams Excel For Both Sides

Early in the second, the Canes got their first powerplay of the night. It very easily could have been a five-on-three powerplay as Jeff Skinner was tripped right in front of the ref for the stoppage of play. The coaches on the Canes bench made it known to the refs they missed an easy call. The Canes couldn’t convert as the Sharks extended their NHL leading game PK success.

Midway in the period, on another attack by the Sharks that looked like it would be the first goal of the game by Tomas Hertl with an open net staring him in the face, Hanfin came from behind and made a fantastic check that forced Hertl to send the puck wide of the net.

These plays are not boring, they’re great hockey. What has becomes the TSA line of Teravanien-Staal-Aho continues to be impressive. Staal’s strength is amazing and his size counters the smaller wingers who are both highly skilled. Teravanien was on fire in the first with six shots on net. 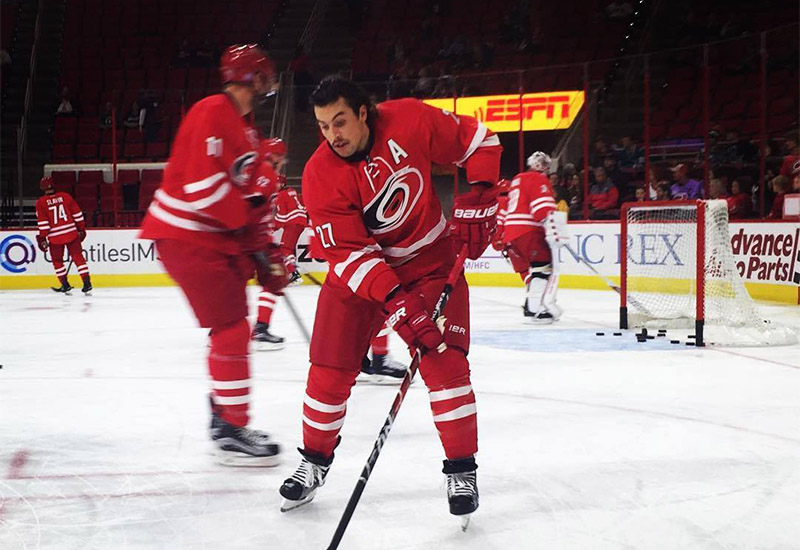 Nordstrom’s First Goal of the Season Is the Difference

Both teams were cautious in the third, knowing one mistake could lead to the other team scoring as both goalies played outstandingly. Aaron Dell is just a rookie and only playing in his third game but played like a season veteran stopping deflections and rebounds as the Canes were hungry for their first back to back wins of the season.

Just over midway in the period, the fourth line of Nordstrom-McClement-Stalberg were on the ice and playing strong in the O-zone. Stalberg took a shot from the left side with Dell making the pad save but Nordstrom was able to pick up the puck, skate sideways and put a backhander top shelf to break the scoreless game. With a minute plus left, Dell was pulled for the extra skater.  Coach Bill Peters had enough confidence in the sophomores as he had Pesce and Slavin out against the Sharks top line and both continued their strong play. With just a nanosecond left, Nordstrom sent the puck into the net from the blue line, and while it looked good to me, it was ruled that went in after time ran out to keep the win at 1-0 for the Canes first back to back wins.

Next Game is Friday against Montreal.  Be There!