Cary, NC – Every time I see World B on press row he always asks two questions: what’s my guess on what the crowd size will be and how are the Canes going to do.

When I said with full confidence the Canes are going to take this one he replied, “Isn’t this the team we spotted a three-goal lead in the third period earlier in the season and wound up losing the game?”

Yes, I said, but no worries, we’ve got this one.

The Canes looked strong early in the game as most of the offense was down in the south end where the Canes shoot twice in all games. Jeff Skinner picked up where he left off the last game in which he had a season high 11 shots, taking two shots in the first.

Ryan Miller, in goal for the Canucks, stopped one of Skinny’s shots that would get by most goalies. Sebastian Aho open the scoring on a pretty tip in while in full stride off a pass from Brett Pesce. Despite the Canes dominating, the Canucks scored two minutes later on a stuff in as the defense didn’t clear the crease. Skinny scored his first of the evening on a powerplay goal on a great redirect from a Noah Hanifin shot.

Give Derek Ryan credit for seeing Hanifin cross ice to switch the play for an open shot. With the period ending with the Canes up 2-1 and playing very well, I felt more confident on my comment to World B, and also to former Cary resident Jim Kelly on my way to the game, of the Canes continuing their home winning streak.

Canes Flat in Second with a Capital F

There’s a commercial with the slogan “A December to Remember” and the second period was a period to forget for the Canes. Similar to the game in Vancouver except this time in the second period, the Canucks woke up for four unanswered goals chasing Cam Ward when the score was 3-2 at just 5:24 into the period.

Ward has been playing lights-out and when all three goals are scored from no more than six inches outside the crease, he can only do so much. The defense has to earn their keep by clearing anyone in an opposing sweater. Vancouver continued their barrage on the Canes backup, former Holly Springs resident Michael Leighton, scoring two goals in the next nine minutes. One was an unstoppable tip in but the other was another stuff-in that set the Canes’ coaching staff in orbit behind the bench.

The Canucks felt the period was theirs and after a clean check by Ron Hainsey, Luca Sbisa went over to Hainsey and dropped the gloves. Turned out to be just a wrestling match but I’ve never liked the no-call on what is clearly an instigator infraction as Sbisa wasn’t the player checked.

After the second with the Canucks up 5-2, World B turned to me and asked if he should go inform the Canucks coaching staff about the memo the Canes were supposed to win. I told him I was going downstairs to get closer to the action on seeing what the Canes will do to the Canucks like what they did to us in Vancouver.

So Exactly What Was Said in That Locker Room Between Periods?

And what a third period it was! Skinny scored his second of the night on a power play very early in the third. The Canes were skating hard, making the Canucks look like they were standing still and the crowd sensed this could be an interesting period.

Ron Hainsey sent a floater from the center of the blue line that found its way past Miller to close the gap 5-4. Just 24 seconds later, with the Canes still in the attack mode, Skinny passed to Ryan along the half boards who threaded the needle to Victor Rask for a tip in to tie the game. A little over a minute later Justin Faulk, from almost the same spot as Hainsey was on for his goal, sent a slap shot into a maze of players but found a hole to send the Canes up 6-5 and chase Miller.

Rarely do you see a game in which both starters are replaced. Why not? It was a period to remember. Fans were high fiving strangers, the ushers, anyone, as the goalie change delayed the new faceoff and allowed the Caniacs to continue the comeback celebration. Jordan Staal, in his first game back after a concussion, gave the Canes some needed breathing room.

Elias Lindholm, also back after missing several games due to an injury, took a shot from the high slot. Staal used his size and muscle to bang in the rebound for a two-goal lead. Former Cane Brandon Sutter got the Canucks within one again on a nice shot from in close. With about 4:30 to go, the Canes were a man down and if the league-leading PK unit ever needed to continue that honor, now was the time and they did it. The PK unit went five for five for an amazing 92.6 percent successful kill rate for the season. Lee Stempniak added an empty netter to close out the scoring. I can’t wait to see World B at the next game. Faith, that’s all it takes –that, and a hungry team!

Next home game is this Friday at 7:30 against the Capitals.  Be there! 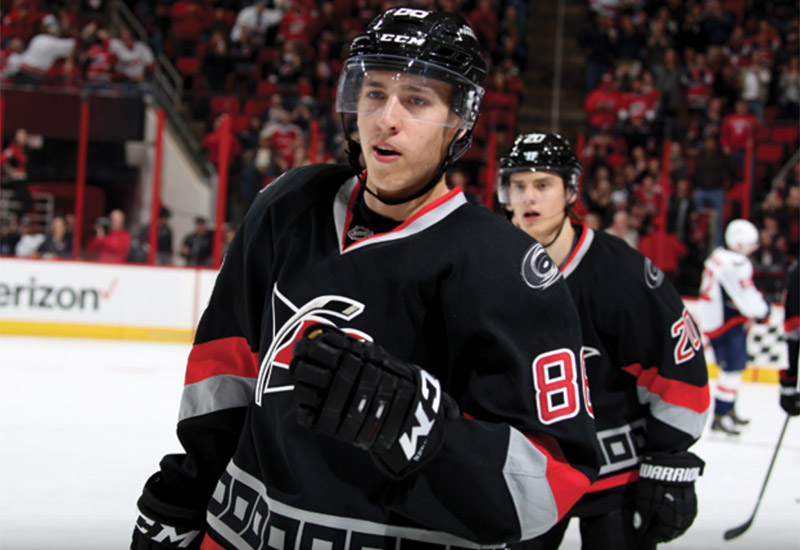