Cary, NC – Folks that know me, know that I’m pretty passionate about “Affordable Housing.” Is it because I’m some screaming, leaning liberal? Naaa. Ok, maybe. But really, it’s because I know the impact that having a safe place to live can have on an individual, a family and a community.

In fact, for those of you that remember, you might think back to when you learned about Maslow’s Hierarchy of Needs. Remember that chart? 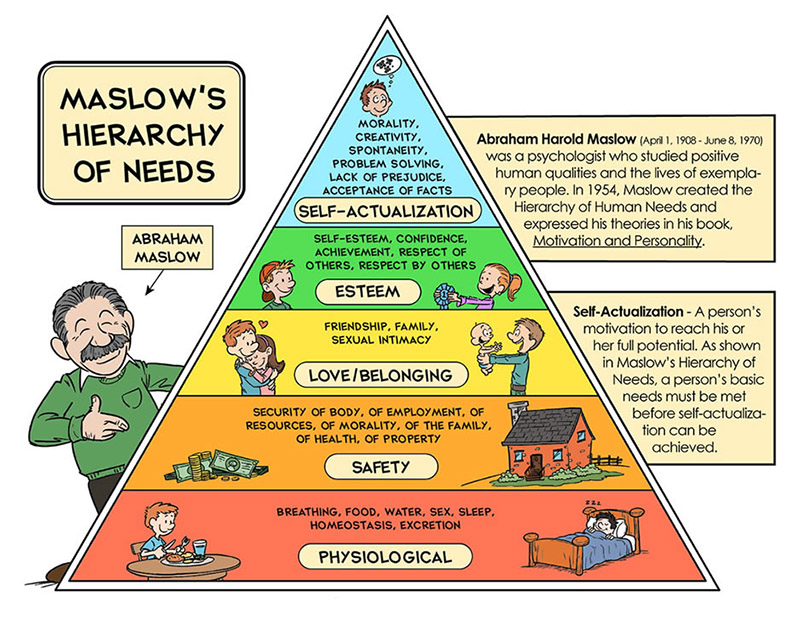 The most important needs are those “physiological needs” that is air, water and food. Also included in those are clothing and shelter. After that is safety, feeling safe from war, disaster, family violence and abuse, and being secure personally, financially, and healthy.

We need these core, most important needs met in order to succeed, to participate fully in society, and to grow. When these needs aren’t met people cannot function properly, families struggle, and there is a high likelihood of failure – at home, work, and at life.

But there is a personal reason for my interest. You see, when I was young, my father left and my mother was left to be a single mom caring for 2 young children. With little money to her name she moved us halfway across the country in order to be closer to some of our family. She struggled to find affordable housing (that was partially subsidized), took on several jobs, and did what she could to often put food on the table for us, and not her. I still remember those days in our little apartment in St. Louis, while mom worked so hard, and struggled so much. I was old enough to see her feed us, but “not eat because she wasn’t hungry.”

I understood that times were pretty tough, but never did this strong and resilient woman let us know how really difficult a time it was. She is an amazing individual, to not only have survived during a time when we had so very little resources, but she found a way to hide the complexity and difficulty of that life from us. Moms are often martyrs; strong impenetrable forces of will – and that’s what she was to us, never letting us know that we counted as any less, than anyone else. And single moms, you rule. I have no idea how you do it. She’s the reason I fight so hard for those who struggle, because I wish there were more folks fighting back then, for her.

It’s because of that experience that I’m proud and honored to have been appointed to the “Wake County Affordable Housing Steering Committee” to work on potential solutions to this problem. Jessica Holmes has been a fierce advocate for families in Wake County, and she leads the charge. There are so many smart, engaged and committed folks on this committee – they represent a number of municipalities (like Vicki Scroggins-Johnson from Morrisville) to representatives from Habitat, our friends at Dorcas, the Housing Authority of Wake, Town of Garner, Churches, Developers, Construction Industry, Policy Advocates, Case Workers, Residents and Stakeholders and many more.

The group just met for the first time on Jan 31st, and there is so much to do. We need all hands on deck, and the best minds to come together, and I look forward to participating and learning along the way. So, let me tell you what I learned…

I’ve written about the homelessness issue here in the Triangle when I did CEO SleepOut. (Don’t remind me of the ants and spiders, please.)

There are many reason for homelessness – but let’s be clear, it’s not cheap to live in Wake County.

So, what does it cost to live in Wake County?

Cost Burden is defined by Dept of Housing and Urban Development (HUD) as paying more than 30% of your income towards housing. And using that definition, there are a whole lot of people in Wake County significantly “cost burdened.”

Looking at these numbers, that means that 100,000 people in  Wake County are “cost burdened” – so about 10% of the 1 million people in Wake County.

Recently, the News and Observer did a story that detailed that the “number of homeless children in Wake County school system has increased 23% since 2009 to 2,736 students.”

During the Affordable Housing meeting, our Wake County Public School System (WCPSS) representative said that this year, the official number is closer to 2900, and he believes that the REAL number is more like 5000. Yes, 5000 homeless kids.

Such a sad and scary number. Experts say that “1 in 30 children are experiencing homelessness” and that number continues to grow. This isn’t a problem we can just ignore, because these kids have it tough, as do their families. They get sick more often, they have a higher rate of emotional and behavioral problems, and not shockingly, in “83% of cases, are exposed to at least 1 serious violent incident.” Homelessness isn’t just the guy you might see along the side of the road, it’s his family, or the kids with him, or even the mom and family working several jobs, but still can’t get ahead or to be able to afford a place to live.

WCPSS helps where they can. In fact, the WCPSS works with 168 separate organizations and programs that offer clothing, bus service, free school meals, first aid and counseling.

What does this look like on the street?  Well, in 2016, Wake County conducted a a Point in time count. 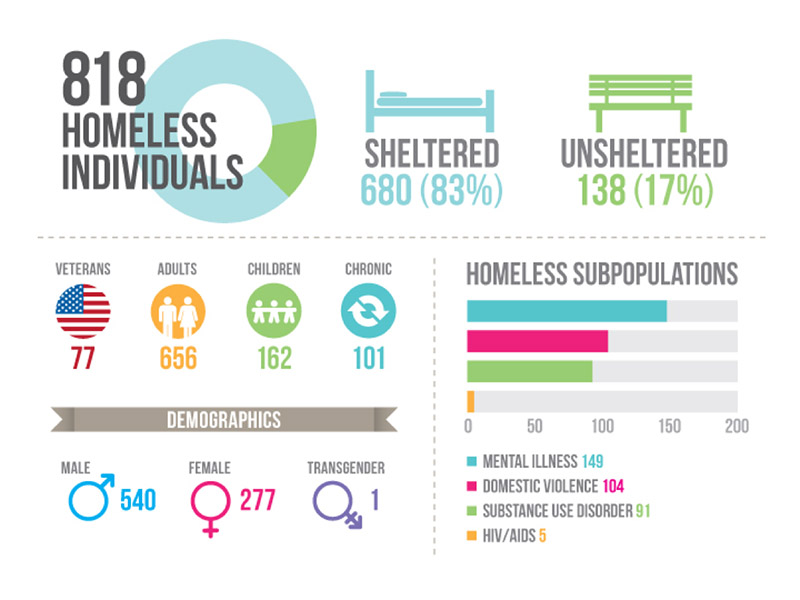 This is a count of sheltered and unsheltered homeless people on a single night, in January. HUD requires these surveys be done yearly.  They don’t show everyone, but just the folks that can be found.

So, what is the definition of Affordable?

There are lots of ways to look at this problem. And that’s what we did.

First, the options for housing assistance vary depending on your income. That makes sense, right? 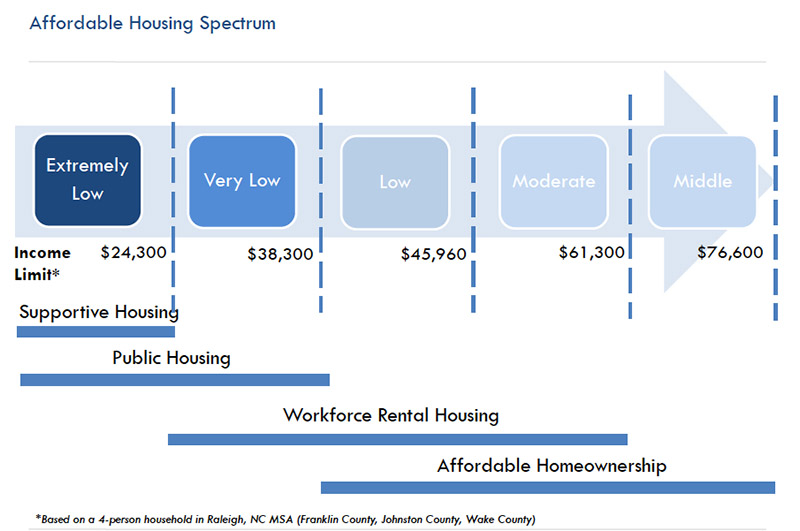 But then, take a look at the GAP – just for people earning less than $25K. Huge gap! 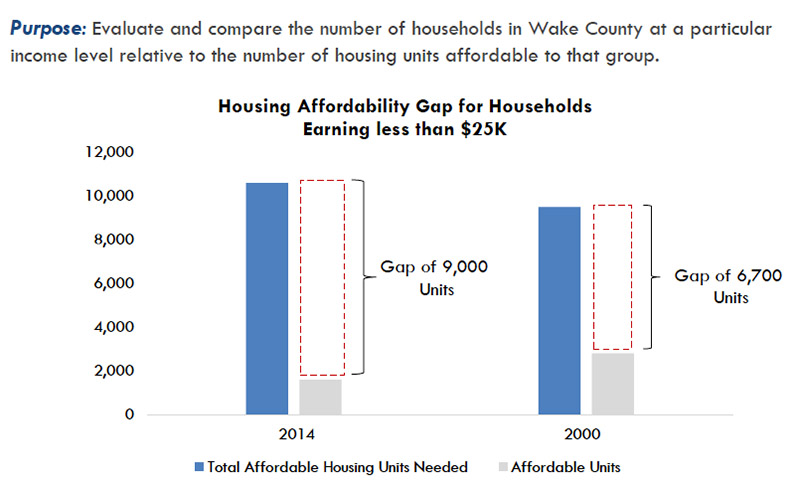 Don’t we have some Affordable Housing in Cary?

Yes, we DO! But just not enough. We have an Affordable Housing Initiative and several plans that have helped increase the number of units in Cary – but it’s tough. The amount of available land is depleting, the price of land is expensive, and of course, everyone wants to live in Cary.

Our last plan was adopted in 2010, and probably could use an update. But there are some interesting stats there. For instance, in 2007 (10 years ago) the median household income in Cary was $89,702. That was double that of the state, and one and one-half times the US numbers. Of course, that high-income level speaks well for the economy of the area, but places significant pressure on those not earning a high income.

Another consideration is that 10 years ago, 38% of Cary’s households earn less than $71,763 annually (classified as Moderate Income) and 24% less than $44,851 (50 percent of median, which is defined as Low Income). So, more than 16,841 Town of Cary households earned less than 80% of the annual median income, that is, they are Moderate to Low Income Households.

Our first Affordable Housing plan was in 2000, and our plan establishes priority for Seniors and residents of our Town Center Area, then Town-wide. We partner with a number of non-profits to help leverage function.

We’ve made some progress – through a number of programs:

And, we have made some progress, particularly in Senior Housing – with a number of apartments developed by DHIC and Evergreen Construction, we have about 325 affordable units for Seniors. Now, that’s not enough, but it’s a start.

Over 44% of seniors pay more than 30% of their income – and many say that’s closer to 60% on housing; and our Cary Aging Issues Task Force report from 2015 also identified the need for more affordable housing for Seniors. 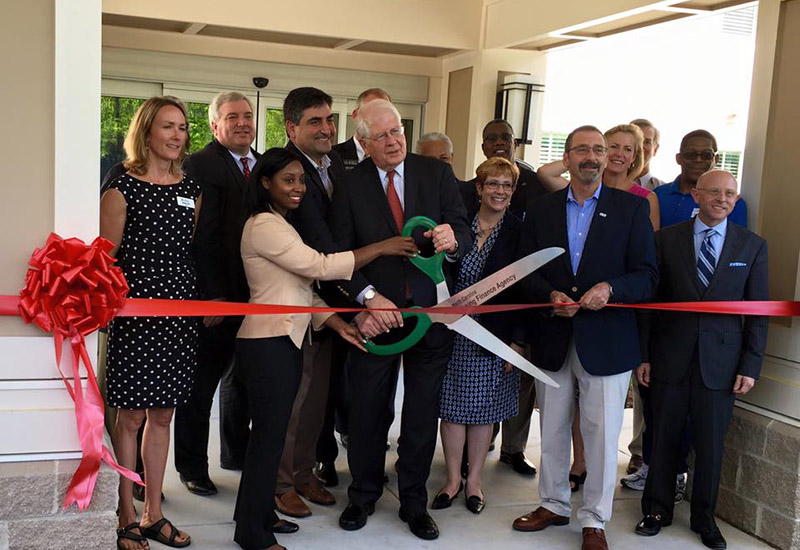 I was privileged to attend the grand opening of Willow Creek Apartments – a beautiful senior affordable housing building right off of Davis Drive in partnership with DHIC, Wake County and the Town of Cary. It’s a 53 unit, 100% smoke free community for older adults, 55 and above who earn 60% or less than the Annual Median Income.  You won’t be surprised to learn that it opened with a 3 year waiting list.

But, we can’t just focus on our seniors – there is a growing need, and we need to be proactive to address it.

The goal of the Wake County Steering Committee is to develop a 20 year affordable housing plan that focuses on:

That first part of the work is to really identify the problem and understand the scope. And that’s what we started. I’ll share more as we make additional progress – I hope you will follow along, and share your thoughts and ideas.

Note: Special thanks to Jessica Holmes and Town of Cary Staff for the slides and stats to complete this important story.

From the blog of Cary Councilmember-At-Large Lori Bush. Photos and charts courtesy of Lori Bush.