Cary, NC – The Carolina Hurricanes and NY Islanders played the back end of a home-and-home series Tuesday at the PNC Arena after a wild 8-4 Canes win the night before. Jaccob Slavin scored a hat trick with Jeff Skinner and Justin Faulk added two goals each and Joakim Nordstrom adding a solo shot. Tuesday saw the Canes go up by two goals only to squander the lead and eventually lose in overtime. 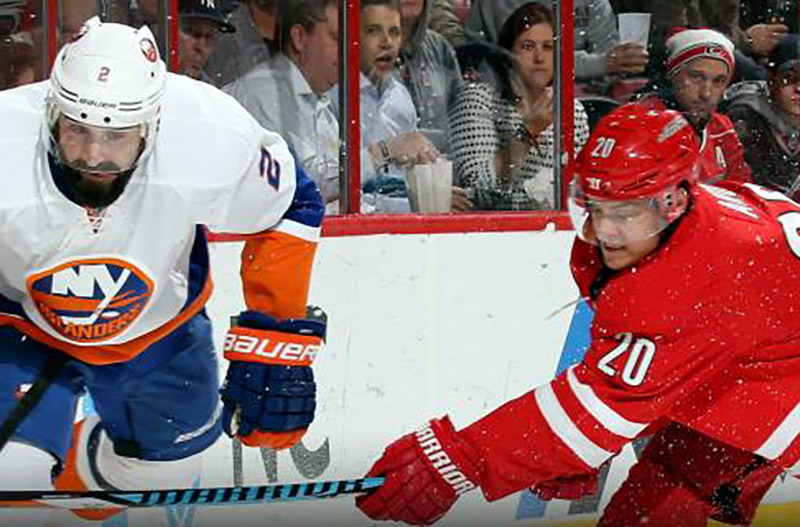 The Islanders are just one point out of the playoff wild card spot and the Canes knew Tuesday’s game would be nothing like the free-for-all on Monday. The Islanders took their time calling up rookie Joshua Ho-Sang but now that he’s in the NHL, from what I see, he’s there to stay. Ho-Sang had a breakaway on Cam Ward, dipping and dazzling all the way to the crease. Ward stood his ground and made the save against the talented speedster.

Both teams were purposely being cautious not to duplicate the coaches nightmare from Monday night as usually only two forwards were going deep with one hovering in the high slot. While the Canes defense shut down John Tavares Monday, he seemed possessed this night as he was very dominate on and off the puck and is truly one of the elite players in the NHL with fantastic ice sense and as we’ll see later, an extremely hard shot.

A little over midway in the first, right off a faceoff, rookie Lucas Wallmark pushed the puck into the Isles’ zone. Nordy went low to rag the puck, Wallmark made a sweep check to keep the puck in the zone over to Lee Stempinak at the half boards, passing to Nordy who sent a wrister in short side to put the Canes up 1-0.

Very early in the second, even before a few fans were still not back in their seats, Elias Lindholm stole the puck at his blue line then used his strength and speed right to the Islanders end. Lindy surprised not only everyone in the house but also goalie Thomas Greiss as he shot from about 20 feet out rather than go in for a jam shot putting the Canes up by two.

Later in the period, Jeff Skinner took the puck down the far left side with two friendlies and one defender. Skinny made a cross ice pass going through the top side of the crease right to Wallmark’s stick. If Wallmark tipped the puck high he would have had his first NHL goal instead Greiss made the pad save along the ice.

Tavares tried to be a game changer by making anything happen. His attempt to strong arm Lindy turned into a penalty for hooking giving the Canes to put the game away if they converted on the powerplay. The Canes couldn’t convert on the powerplay and while had the puck a good amount of time in the Isles’ end, didn’t have any real scoring chances. From then on the tide started to turn towards the Isles. Late in the period with just over a minute to go the Isles struck twice sending the teams to the locker room with the momentum going to the Isles. 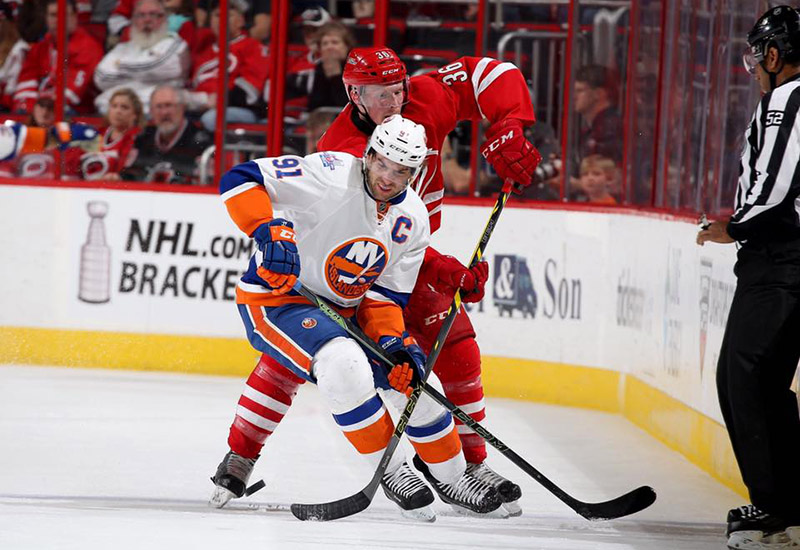 On to the Overtime

The third period was all checking even though both teams had their most shots. The goalies were both on their games but many of the shots were shots by stats, not real scoring threats. In the history on the NHL, no goal was ever scored going through a logo on the goalies uniform. The refs let the teams settle things on the ice with no penalties called in the third so on to the dreaded OT (in Canes minds).

The Canes started the OT with Jordan Staal, Slavin and Sebastian Aho; that’s strength, speed and talent and not a bad combination. Staal won the faceoff and the Canes methodically brought the puck into the Isles end, after spending time circling, the Canes lost the puck and were on a line change.

Only Staal was able to change as Ho-Sang used speed to enter the Canes end, dropping a sweet pass to Tavares who wasted no time in wristing a shot through the screens past Ward for the Canes fifth loss in a row after regulation time ended.

Next game is Thursday, March 16, 2017 against Eric Staal and the Wild at 7 PM. Should be an interesting homecoming for Eric. Be There!