Cary, NC – The Carolina Hurricanes set a franchise record of 13 straight games with garnering a point with an exciting 2-1 win in overtime on a punch-in goal by Noah Hanifin. The Columbus Blue Jackets are vying for both the President’s Trophy, the division and conference championship so this game meant as much to them as it did for the Canes in keeping their playoff hopes alive. The Canes remain four points out of the last Wild Card slot as Boston also won but leap frogged the Islanders who lost to the Flyers.

The Blue Jackets are a well-coached and disciplined team with John Torortella at the helm. Torts is a no-nonsense coach that gets everything out of every player on every shift. There is never a doubt where you stand in his eyes and if it’s not good, you’ll be doing a lot of sitting. Canes coach Bill Peters is similar but for the most part, does his coaching directly to his players. The Jackets came out with their typical grind style, battling hard in all four corners, cycling down low waiting for an opening.

Columbus is a big team, outweighing the Canes by an average 10 pounds and using that to pinch players away from the puck. The Canes first appeared to be rattled as by the first TV time out the Jackets, with everyone having a shoot-first mentality, had seven shots whereas the Canes had one and that was a gift. Cam Ward was challenged but was able to make every stop and when needed, had big time help from his defense. Not that Peters needs a TV timeout to send a message but starting with the next shift, the Canes turned on their own heat popping off six shots and frustrating the Jackets with no more shots on Wardo for the remainder of the period. 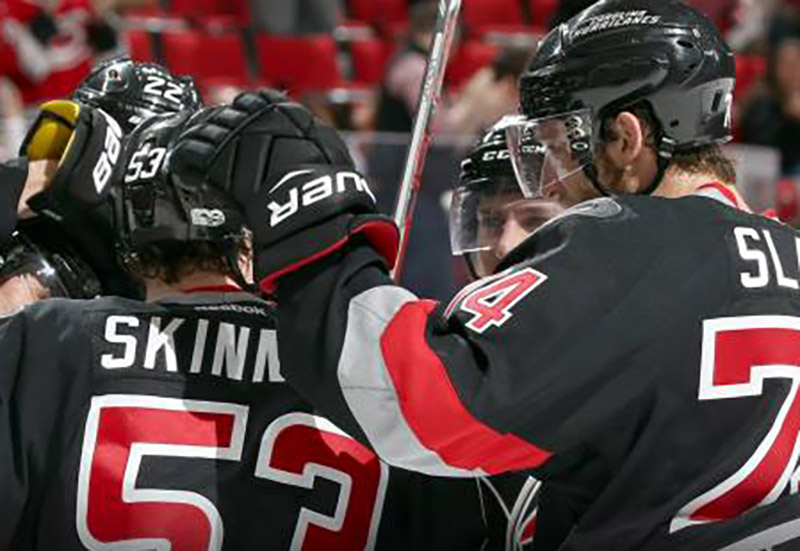 Heat Turns on in the Second

The second period saw both team ratchet their play up several notches. The skating was faster, the hits harder the forechecking more intense and the chippiness off the puck interesting to watch. Elias Lindholm is absolutely a player you must keep your eyes on for at least one full shift. His ice sense is far beyond what a 22 year old normally has, his passing is like Ron Hainsey’s – hard and to the tape, his checks against the boards are hard, his forechecking is superb, speed and agility typical of a Swede and most of all is a great teammate.

Midway in the period, the Jackets were pressing hard, with their top line on the ice, they kept the puck in the Canes zone for nearly the entire time getting off four shots on Ward. Ward continued to make save after save but in one sequence the puck slid to Wardo’s right where the net was wide open, Hanifin quickly pounced on the puck, calmly going around one Jacket then cleared the zone easily negating a sure goal for the Jackets. Late in the period, Scott Hartnell had the puck in front of the Jackets bench with 3 Canes surrounding him. Hartnell saw one of the, if not the most, Caniacs least favorite players, Jack Johnson crossing the blue line on the left side, slid a pass over to Johnson who put a shot high glove side past Wardo for the 1-0 lead with the appropriate reaction from the partial Caniac crowd. Both teams had lots of offense in the second with the Canes getting off 12 shots to the Jackets 11 as the stanza ended with the 1-0 Jackets lead.

Skinner to the Rescue

The Canes were giving it their all in the third, winning every puck up for grabs, sending as much rubber as possible at Joonas Korpisalo who is a very good back up goalie. Joakim Nordstrom had another good game as did Brock McGinn both doing very well body checking to get opponents off the puck. Jordan Staal was a hitting machine leading the Canes in that category and frequently had his big body in the dirty area in front of the goal. Staal doesn’t have the softest hands for those juicy rebounds but as long as he stays in front good things will happen. Late in the period, the line of Jeff Skinner, Teuvo Teravainen and Victor Rask were on the ice keeping the puck in the Jackets end and really pressing.

What was evident for nearly the entire game up to that point was no player from either team was leading a charge, it seemed like everyone was waiting to see who would grab the reins. Skinny ceased that opportunity then started doing what he does best: create offense. Hanifin had the puck at the blue line sending it down to the far corner. Teravainen got the puck, dropped it off to Skinny as they were doing quasi-cycling, Skinny got by one defender, saw Rask fighting for position in the crease with Seth Jones and sent a hard pass to the center. The puck bounced off a skate going cleanly into the goal to tie the game. At first the goal was given to Rask but upon review, switched to Skinny as the puck went off Jones’ skate for his team leading 32nd of the season with the PNC Arena trying to get close to playoff decibel levels.

The game ended at 1-1 and if the Canes ever need to break the OT/SO hex, now was the time. The Canes won the opening faceoff and looked like the better team on the ice. After the first line got tired, the Canes had the better line change as the puck was in the Jackets end. The second line continued the strong showing but did allow the Jackets a shot on Wardo. After Wardo’s save the Canes changed lines again with Skinny jumping over the board then immediately got the puck. Skinny tried the Erik Cole power move down the right wing, turning to the goal and did manage to get off a shot, the puck bounced out into the middle slot area that Hanifin jumped on punching the puck in for a great goal with Caniacs high fiving anyone within 15 feet. The didn’t gain any ground on the playoff race but didn’t lose any either making the next 6 game all that more interesting.

Next home game is Saturday, April 1, 2017 against Dallas. Be there! 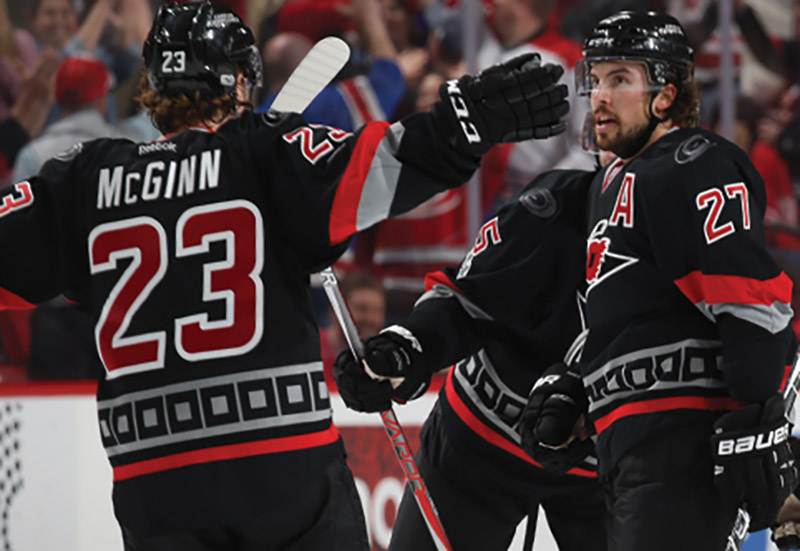 Coming Films to the Cary Theater – April
Scroll to top