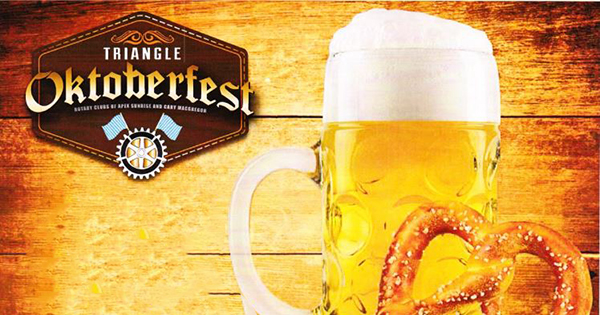 Cary, NC – Triangle Oktoberfest keeps getting bigger with each passing year and 2017’s follows that tradition, with music from a nationally recognized polka band, competitions to lift enormous beer steins, authentic food, beer and steins from Germany and much more.

New Music and Games to Oktoberfest

Triangle Oktoberfest, taking place at Koka Booth Amphitheater on Friday and Saturday, October 6 and 7, 2017, has been a local tradition for the past few years now, carrying on the much older traditions of Bavaria and Germany at large.

Through the partnership of the Apex Sunrise and Cary-MacGregor Rotary Clubs and the Town of Cary, the event has gotten people together to enjoy German beer, food, music, dance, games and beer while also raising money for charities. This year’s charity is the Leukemia and Lymphoma Society.

“It’s big crowds and it’s done for charity,” said Burgermeister Randy Bossé. “The money is plowed back into good causes.”

Among this year’s additions are the inclusion of popular band the Polka Brothers, who have made a name for themselves mixing traditional dancehall polka with modern music to play polka-themed covers of current day hits.

“They’re exactly the kind of sound we’re looking for,” Bossé said. “It’s a fusion of new and old and they do it well. It’s a big deal for them to come down to North Carolina.”

The Polka Brothers will be performing all day Friday and will kick off the Saturday event, with local favorites Peak City Sound playing on Saturday night.

Another addition is the inclusion of the German game Masskrugstemmen, translating to “beer stein holding.”

“Basically, you’re lifting up a five-and-a-half pound stein of beer and seeing how long you can hold it,” Bossé said. “It’s great to watch and it’s fun to see big guys from Ft. Bragg and Raleigh rugby do it thinking it’s no big deal and realizing how tough it is.”

Other games include Hammerschlagen, a game involving hammering nails into a stump (“as simple as it sounds,” Bossé said), two weiner dog races, a yodeling contest and more.