Cary, NC – This week had a much slower pace which I greatly appreciated.

Monday the town manager and I had a virtual meeting with the Research Triangle Foundation’s new CEO Scott Levitan. He provided background information on education, places he had worked, and issues he had faced. We asked him questions about his plans for RTP. Like his predecessor he plans to make it a more live, work, and play area of the region. What he described basically sounded like he was creating a new city. I asked him about infrastructure as he plans to implement the vision and he said it would be a challenge. It should be pointed out that he will need fire and police protection as well as water and sewer services. RTP gets and will be getting services from places like Cary and Durham at high rates. It will be interesting to see how this all works since RTP doesn’t pay taxes. Stay tuned.

Afterwards the manager and I met for our one-on-one meeting. There weren’t many issues so we spent most of our time talking about private matters.

Monday night I met with the Mayors Association in Apex. Nine of the twelve mayors were in attendance except the mayors of Garner, Rolesville, and Wendell who were absent. The beginning of the meeting included a presentation from Wake County Public School System Superintendent Dr. James Merrill. They are concerned about House Bill 704 which would split school systems like Wake County. This would create massive complexities, duplications, and expenses. IMHO it would double Cary’s taxes and would be devastating to our community and region. Hopefully, our legislators will see the obvious and kill this bad idea. The rest of the Mayors Association meeting was spent on discussing finances and whether or not to become an official non-profit organization rather than a social group.

Tuesday I joined Mayor Pro-Tem Yerha and council member Frantz in a meeting with developer representatives from Singh who are proposing development on two corners at Evans Road and Cary Parkway. The proposal for the southeast corner of that intersection, which has numerous conditions, is for a retirement community. If approved it would be a Waltonwood similar to the one at US1 and Cary Parkway. I have no problem with this proposal and think it would be a good fit to the neighborhood. The second part of the proposal is on the southwest corner of the intersection and is also heavily condition. This is the most controversial corner because the plan calls for a mix of uses and can be used for office. Since Cary doesn’t have a lot of available land for office the proposal is much more difficult to consider. However, the developer representatives would argue that this site is not suitable for office. The conditions for this site include garage apartments and an 8,000 square foot clubhouse complete with a salt water pool. If approved, this will be a very high end apartment complex. The meeting concluded in less than an hour. Our decision on this proposal is scheduled for our October 26th meeting.

On Tuesday I responded to questions presented by a high school student working on a project. Here are the questions and the responses: 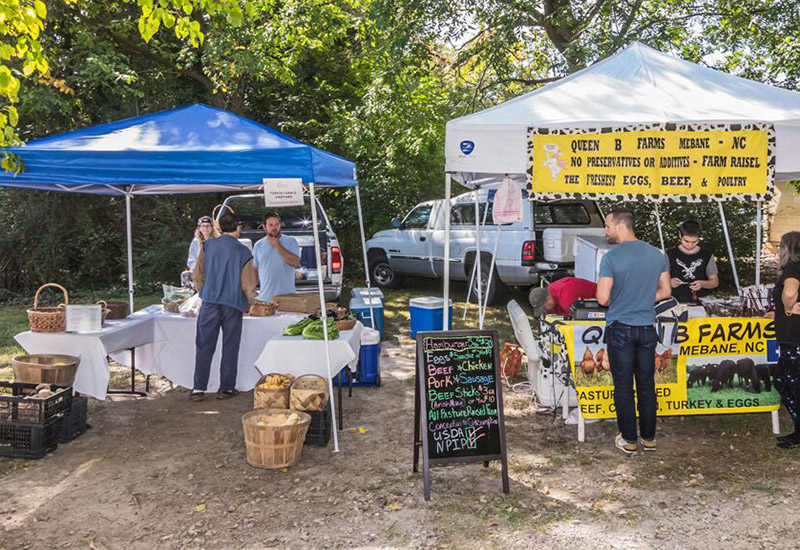 Saturday I joined Mayor Pro-Tem Yerha and council member Frantz at the first annual Farmers Fall Festival at the downtown Cary farmers market. Most of the vendors there were craftsman or artisans but there were a few farmers providing fresh food. I suspect this farmer’s market will get larger and larger as downtown redevelops and more people move to the area. My role at this event was to provide welcome remarks. Afterwards I visited all the vendors.

This week included a notification that Cary rated #6 for highest quality of life in the United States out of the 177 cities with over 150,000 residents. The data used for the decision used estimates from the 2016 U.S. Census Bureau American Community Survey and included the number of hours worked, commute times, percentage of income spent on housing, health insurance coverage, poverty levels and unemployment rate. We are proud to add this to our long list of accolades.

Mother Nature cooled things down this week just in time for our annual winter weather exercise on Wednesday, affectionately known as our Snow Rodeo. Several hundred employees benefited from hands on training with chainsaws, plowing and general personal/vehicle safety. We even had several members of the media join us for the exercise to tour our Snow Command and see materials up close. I want to thank the leaders in public works for positioning us for another successful season!

The weather was perfect Thursday evening for community engagement at our new Old Reedy Creek Trailhead. About 100 outdoor enthusiasts passed through during the three-hour event. If you’ve not been, the trailhead is located at 2139 Old Reedy Creek Road and offers 82 parking spaces, restrooms, a shelter, bike repair station, and drinking fountains for people and pets. It is the starting point for Cary’s seven-mile Black Creek Greenway and provides access to the East Coast Greenway through Umstead State Park as well as the scenic Lake Crabtree overlooks. It’s a great addition to our greenway system.

The Town of Cary was highlighted at the Sustainable Fleet Technology Conference & Expo at the Raleigh Convention Center, October 11-13. Terry Yates from IT spoke on Cary’s smart city work and Cary’s Fleet Manager, Brandon Pasinski, received the Town’s “Champion”-level recognition from the NC Smart Fleet Initiative for leading the way to reduced transportation-related emissions and increased efficiency in the Cary fleet. Cary was also nationally recognized, in the Honorable Mention Category, as among the top 70 Green Fleets in the nation, out of a total of 38,000 fleets considered by the 100 Best Fleets organization.

In an effort to connect with teenagers in one of our Project PHOENIX communities, staff joined with partners from Hope Community Church to surprise students at their neighborhood bus stop Wednesday morning. The teens were greeted with donuts and OJ, plus information on upcoming teen events and services offered by the Town. This was a first for us, reaching about 30 middle and high school students through this initiative.

With elections behind us, please find the following stats as related to our most recent municipal election. A note of thanks to Council member Jack Smith, who made the request for this information earlier this week.

Many thanks to Anna Readling for all of her hard work on the Town’s application to be a Certified Local Government (CLG) under the US National Historic Preservation Act. We received word this week of its approval by the US Department of the Interior, as administered by the North Carolina State Historic Preservation Office.

Next week will be a busy one for me and will include staff meetings, a CAMPO meeting, a regularly scheduled council meeting, Cary Town Band’s 30th anniversary, and TAC’s 10th anniversary.

Well, that is all for this week. My next post will be on Sunday, October 29th.  Although I have Facebook and Twitter accounts those are not the best means of communications with me. Please send all Town of Cary questions or comments to Harold.Weinbrecht@townofcary.org and email personal comments to augustanat@mindspring.com.

From the blog of Cary Mayor Harold Weinbrecht. Photos by Brooke Meyer.

NCFC Qualifies for Playoffs After Home Game Against San Francisco