Cary, NC – The Cary Theater’s newest Halloween tradition started in 2016 and now the home-made zombie film event is back with more participants in its second year.

Note: The writer of this article is also participating in Zombiepalooza.

Zombiepalooza is a free-to-attend event where Cary residents make their own short zombie films, with a few parameters included to make sure they are appropriate for all ages and were made specifically for this event.

“This year we have more films than the first one,” said Joy Ennis, Operations and Program Supervisor and the Cary Theater. “There will be 15 films.”

The event takes place at the Cary Theater on Friday, October 27, 2017, starting at 7 PM. Two top films are selected by a panel as winners, plus the audience can vote for a “People Choice Award.” Audiences are also encouraged to dress like zombies and the best costume will also win an award. All awards include prizes paid for by the sponsors.

With so many people contributing short films, Ennis said there is a lot of diversity in what people will see.

“There’s silent films, black-and-white films, some that are more funny, some more on the scary side. We’ve got wide range,” Ennis said. “Everyone knows about Night of the Living Dead and those zombies but these films really open that up.”

This will be the first Zombiepalooza following the death of George Romero, whose films are attributed to spreading the idea of zombies in the popular consciousness. Ennis said Romero is always top of mind with this event – last year’s Zombiepalooza ended with a screening of “Night of the Living Dead” and this year will end with “Dawn of the Dead,” both directed by Romero.

“It’s a tradition we’d like to continue. It pays tribute,” she said. “Whether he meant to or not, he created a genre. He had ideas and didn’t know it would go where it is today.”

Another difference with this year’s Zombiepalooza is it falls on the same weekend as the Sick Chick Flicks Film Festival, which will have horror, science fiction, fantasy and other thematically appropriate short films playing at the Cary Theater on Saturday and Sunday, October 28 and 29, 2017. 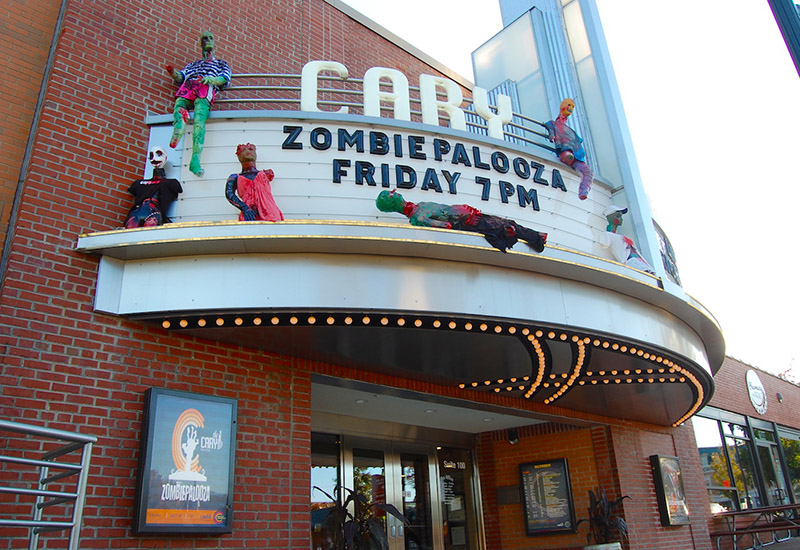 Story by Michael Papich. Photos courtesy of the Cary Theater.