Cary, NC – Not sure if it was the knowledge of home cooking with seven of the next 10 games at the PNC Arena, playing a third bad team in a row or the desperation that something has to change, and change quickly, as the season could have started slipping away, but the Canes pulled through with a satisfying 3-1 win over the Florida Panthers Tuesday, November 7, 2017.

The Panthers have a lot of similarities with the Canes: no mega stars other than the legendary goalie, Roberto Luongo; a lot of speed both up front and on defense and rookies of the year: Jeff Skinner and Aaron Ekbald.

The Canes dominated the early play as Coach Bill Peters like to refer to “starting on time” with “no passengers.” Interpretation: Canes started the game skating hard, every player, every shift, keeping the pressure on with the puck mostly in the Panthers end.

Skinner, who has improved his forechecking this season, drew a high stick from Connor Brinkley just as he was rounding the goal going to the low slot area. The Canes powerplay, which has been well below par so far this season, looked much better but the result was the same: no goal. Just 20 seconds out of the penalty box, Brinkley was called for tripping Skinner near the blue line, no doubt sending Panther coach and former Carolina Hurricane Bob Boughner into orbit.

Boughner was no angel when he played and I’m sure he’s a hard nosed disciplinary type coach – as he was as a player – that knows his team cannot afford senseless penalties. The second powerplay wasn’t as impressive as the first; they still didn’t score but appeared better than previous games.

The Canes broke the ice with a great team effort goal. Justin Williams had the puck along the far boards, skated uo to the blue line passing over to Roland McKeown in the center. McKeown threaded a pass between two defenders to Noah Hanifin in the left circle, Hanifin saw traffic in front letting go a hard shot. The shot was blocked with Brock McGinn fighting for position in the dirty area then getting a backhander on the puck to put the Canes up 1-0. Pretty cool to score with your brother on the opposing team and both parents in the stadium watching.

Just over a minute later Skinner got a penalty of his own when got called for slashing on what appeared to be a reflex penalty after being slashed with no call. The Panthers wasted no time knotting the score on a bad defensive let down that left Scott Darling out to dry. Vincent Trocheck came in behind the defense, skated across the goal, drew Darling out with a fake then had a completely open net to slid the puck hard in to tie the game. The Canes had 20 shots on goal in the first, added another 19 in the second and only had the one goal to show for it. One of the famous saying is sports is “the stats don’t lie” held true for the Canes, not only for this game but for this season. And some would argue for the past several seasons.

Most of the shots were from 20 feet and beyond, very few from in the deep slot or muddy area as coaches call it. The farther the shot, the more likelihood it will hit something or somebody on the way to the net. The offense hopes for a tip in, AKA a goalie’s nightmare, while the defense is just counting on hitting a body, anyone’s body as long as it stops. That needs to be addressed.

Both teams came out cautiously in the third, almost like boxers around the eighth round: a jab here, upper cut there, anything to make it to the end. After a shift or two, Peters put his card up to his mouth blocking the lip readers but like the changing of the leaves this time of the year, his face went to a bright red. I doubt he was asking if everyone voted before the game, being Election Day and all.

Whatever he, Rod Brind‘Amour and Steve Smith said behind the bench, the team started getting in front of Luongo. Just under midway in the period, McKeown had the puck up high passed over to Williams in the high slot. Willie skated a few strides then picked a spot on Luongo’s stick side. The puck was stopped but bounced up; Derek Ryan was in perfect position to bat the puck over the pads for a 2-1 Cane lead.

Out of the last four Cane goals over the past few games, all goals were within three feet of the goal. The Panthers pulled Luongo with just over two minutes and reminiscent of the Stanley Cup final game in 2006, Williams carried the puck over the blue line putting it in the empty net to seal the win as he did in 2006, 3-1.

Next home game is Saturday, November 11, 2017 against the Blackhawks for the first Home Grown Series, Be There! There’s another 2-for-1 Special for the Saturday, December 2, 2017 and Tuesday, January 12, 2017 games. Contact me at bfennel11@yahoo.com if interested. Go Canes! 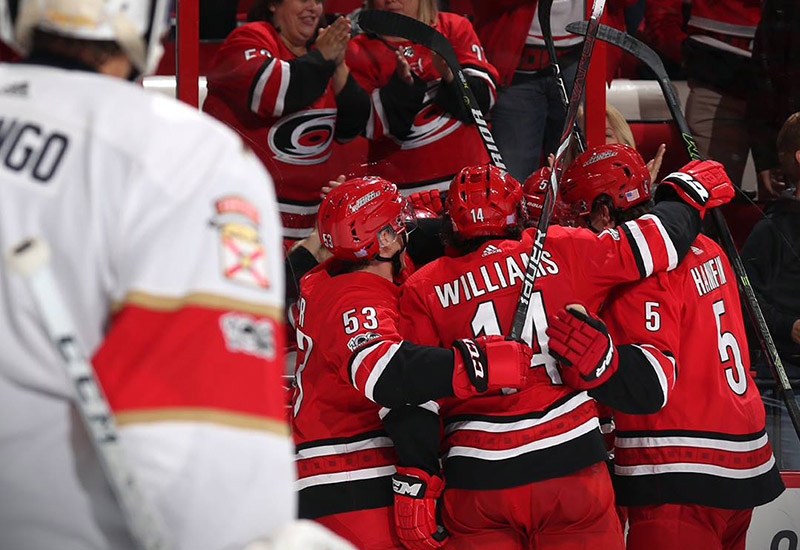