Cary, NC – The Carolina Hurricanes lost in overtime, 5-4, against the Washington Capitals but the mysterious extra point allowed the Canes to get into wildcard spot for the playoffs. The Canes and Caps will seem like they’re in the playoffs now as they’ll see each other three times in the next 11 days. If tonight’s game was any indication of the next two, those should be physical and entertaining games.

The Caps are once again leading the Metro division and are a solid team with one of the bigger rosters in the east including several All Stars. The Canes entered the game knowing how large this game would mean to where this season would go. Getting the loss in OT was disappointing but the Canes had to have some good take aways such as: scoring four goals on Branden Holtby, the powerplay continued to not only look good but produce and the PK was effective.

Victor Rask opened the scoring early on a muffed pass by John Carlson. Give Rask credit as he was forechecking deep in the Caps end as the Caps were making a line change. Carlson tried to make a pass to Christian Djoos but the puck slipped off his stick. Rask was in the right place at the right time, grabbed the puck, dipsey-doodled in front of the net then sent one in high to give the Canes a 1-0 lead.

The lead was short lived as just over a minute later the Caps started in their own end, speeding through the neutral zone. Then just as they were crossing the Canes blue line, Justin Faulk took a gamble to charge Stephenson Chandler, but the gamble failed as Chandler got passed Faulk sending a perfect centering pass to Alex Chiasson for a pretty tip in to tie the game.

The Caps took the lead six minutes later when Devante Smith-Pelly took advantage of an ill-time line change by the Canes. As Noah Hanifin was skating into position, Smith-Pelly hesitated just long enough, then sent a sharp wrister stick side of Ward to put the Caps up 1-2. 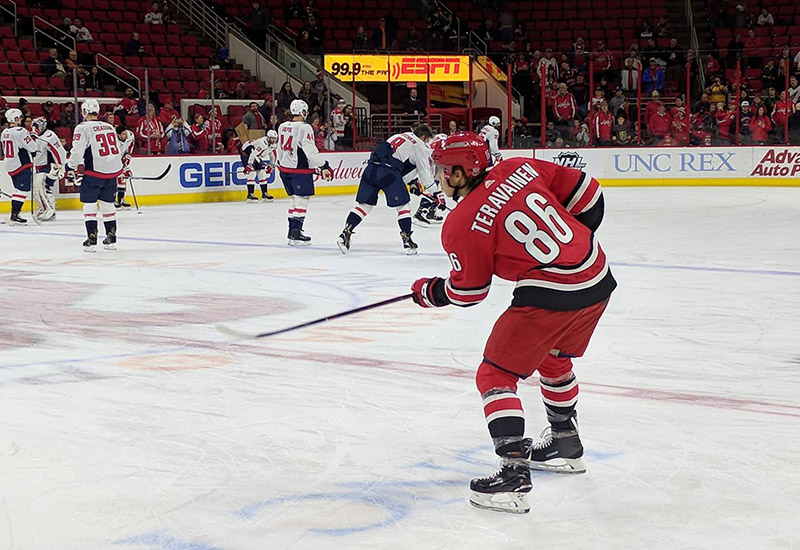 The Caps increased their lead at the 8:48 mark of the second when Dmitry Orlov sent a hard shot from the neutral zone off the back boards behind Ward. Like all coaches preach in all sports, Orlov followed his shot, outskated the Canes defense and backhanded the puck around Ward. Rask got his second of the game on a powerplay after hard work by Jeff Skinner below the goal line, sending a soft pass to Justin Williams in the crease who opted to pass to Rask in the high slot.

Rask wasted no time sending a hard shot through the maze of players to cut the lead 3-2. The rest of the period was entertaining north and south hockey with very little play in the neutral zone. Both goalies were solid with several world class glove saves and excellent rebound control.

Early in the third, hard work by Derek Ryan behind the net was key to the Canes third goal. Ryan squirmed by a couple of defenders then sent a pass to Elias Lindholm right in front of the crease. Lindy wasted no time putting everything into the shot that went along the ice past Holtby.

Just over a minute later, Sebastian Aho was working the puck along the near boards then sent a pass to Teuvo Teravainen who was covered like a blanket. Teravainen attempted a shot that was blocked by a defender but Brooks Orpik’s attempted clear knocked the puck into the net to give the Canes a 4-3 lead. Earlier in the game, Orpik tried to break the neck of a second Cane, his first was Erik Cole’s in 2006, when he got called for boarding Ryan who went face first into the dasher. Just under the 13 minute mark, the dynamic duo of Niklas Backstrom and Ovechkin teamed up that resulted Ovie’s first shot on goal, a backhander that slipped by Ward.

The Canes had a powerplay with 1:55 left in the game but just couldn’t get anything set up for a decent shot. In the overtime, Seabass had a clear look at the net but hit the right post. Backstrom picked up the rebound then once again fed Overchkin whose second shot on net also got by Ward with just under two minutes gone in the overtime. The Canes did get the mysterious extra point that vaulted them into the Wildcard spot for the playoffs. The Canes have a hard week ahead of them with four games on the road.

Next home game is Friday, January 12, 2018 against these same Washington Capitals. Be there! 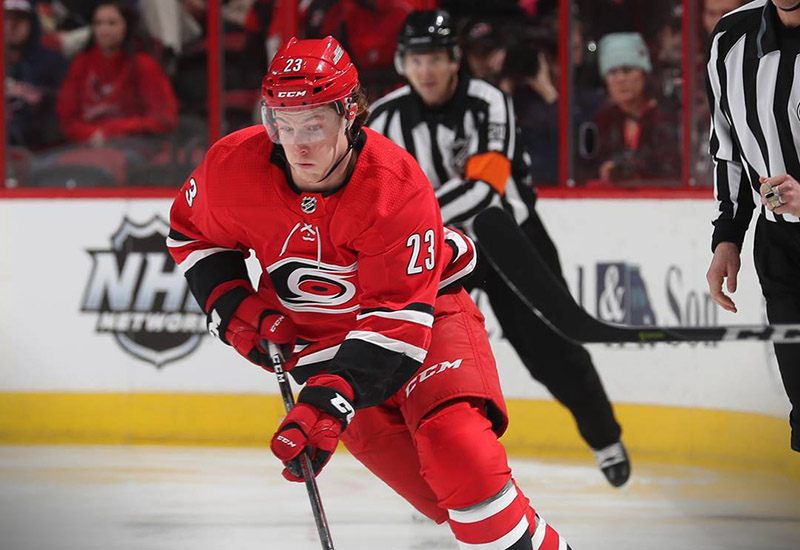