Cary, NC – Drivers in Cary may have noticed gasoline prices growing over the past few weeks. In fact, prices are significantly higher than they were this same time last year and there are a few key reasons why.

At the start of 2018, it was not unreasonable to find a gas station in Cary with prices around $2.30 per gallon. Less than a month later, it would be hard to find a station with gas for less than $2.45 per gallon.

North Carolina’s average gas price has been climbing this month and the current state average – $2.45 per gallon – is up $0.27 from this same time last year according to AAA.

Normally, cold weather and the difficult road conditions snow brings cuts down gas demand and thus shrinks prices but according to Tiffany Wright, AAA Carolinas PR manager, the opposite happened this year.

“Compared to the first few weeks of January last year, consumer gasoline demand is noticeably higher, which is surprising giving the frigid winter some of the Carolinas have experienced this month,” Wright said.

Wright said this unusually high demand is exacerbated by supply lines that have still not recovered from the hurricanes that hit Texas and the Southeast in 2017.

“The gas market never fully stabilized after the hurricanes and flooding the Carolinas experienced in 2017,” Wright said. “Couple that with an increase of motorists on the road from last January means higher prices may be here to stay if demand remains this unusually high.” 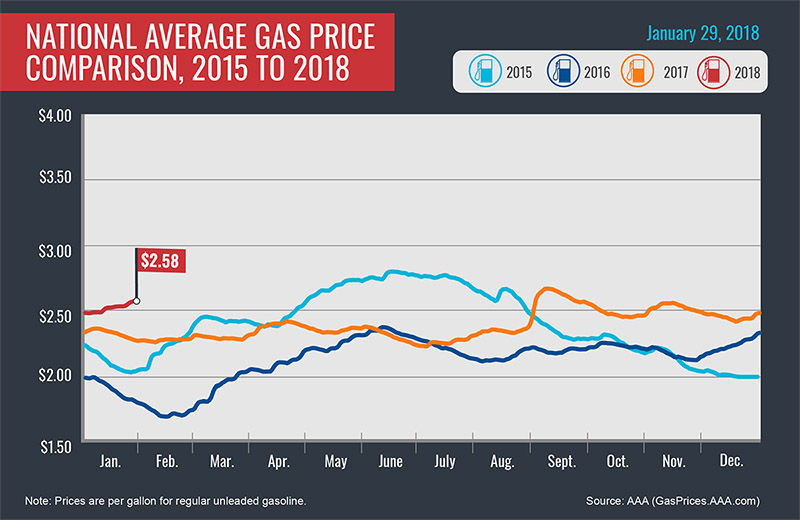 While demand for gasoline is uncharacteristically high in Cary for this time of year, there are also national causes for current high gas prices. Crude oil prices are rising in the New York Mercantile Exchange, all while national inventory is at its lowest level in three years.

At the same time, national oil production is nearing a record of 10 million barrels per day. According to Wright, these surging crude oil prices will result in higher prices at the local pumps.

“Crude oil has been selling at very expensive rates the past few months. Those higher market prices are now trickling over to consumers at the pump,” Wright said.

Currently, the lowest gas prices in the United States are in South Carolina, with an average price of $2.33 per gallon.

To get help finding low-priced gasoline,WRAL tracks gas prices around the Triangle online.